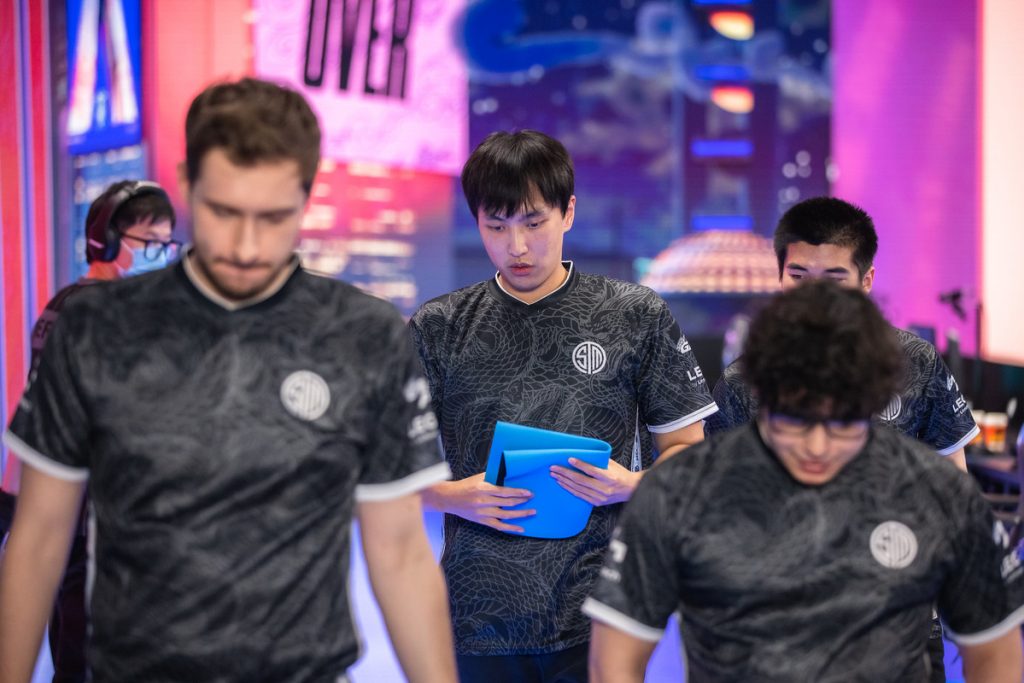 TSM are heading for the airport after their Worlds run ended at 0-6. (Photo courtesy Yicun Liu - Riot Games)

The 2020 World Championships continued on with the conclusion of Group C. TSM made history as they became the first pool one team to ever go 0-6 at Worlds, while Gen.G and Fnatic will advance on to the quarterfinals. We take a look at the top storylines of the World Championship so far.

There were four teams in pool one of the group draw for the Main Event: Top Esports, G2 Esports, DAMWON Gaming, and TSM. Two of those teams — G2 and DWG — have already qualified for the quarterfinals, while Top Esports are all but assured to go through after starting 3-0.

The North American squad got to avoid the best of the other regions by finishing first domestically, but that didn’t help them in any way. TSM opened their tournament with a disappointing loss to Fnatic. Vincent “Biofrost” Wang’s Alistar was targeted early, allowing Fnatic to get ahead. Fnatic got signature picks in Oskar “Selfmade” Boderek’s Evelynn (4/1/4) and Tim “Nemesis” Lipovšek’s Lucian (4/0/3) to lead the way, winning 12 kills to 5 in 34 minutes.

TSM then followed up that opening loss with two more losses to close the first round robin. First was a loss against Gen.G that reminded of many of the old losses by NA teams to the LCK. TSM led in kills for the majority of the game, but they were always down in gold due to CS leads and turret takes by Gen.G. Gen.G needed only one big fight win to win 9 kills to 6. TSM then fell next to LGD Gaming, once again trailing the entire game. LGD beat TSM 21 kills to 10 in 37 minutes to move them to 0-3.

With three days off between their next set of games, TSM looked…exactly the same. With their Worlds run on the line, TSM began day six against Fnatic. The game was never close. Once again destroyed by the mid/jungle duo of Nemesis (9/0/7 Orianna) and Selfmade (2/0/10), TSM was eliminated with a 17 kills to 3 loss. The enduring image of the game will be Selfmade walking up 1v4 to dragon to steal it away as the four members of TSM watched him do it. Pay special attention to Biofrost standing on the blast cone with his mouse and keyboard seemingly disconnected:

There would be no feel-good momentum heading into the off-season, either. TSM lost their final two games to Gen.G and LGD Gaming to become the first pool one team in Worlds history to finish 0-6.

There is no sugarcoating it: this was the worst team performance in Worlds history. The MAD Lions may have failed to make it out of Play-Ins, but they were the LEC’s fourth seed and still won some games. TSM were the first seed of a major region, playing the second, third, and fourth seeds from other regions, and could not win a single game.

While regional friend Team Liquid went down fighting, TSM rolled over. The entire starting lineup remains under contract through 2021, but it seems unfathomable that it will remain intact to begin next year. Biofrost is an obvious candidate to go, especially when TSM performed better after he was benched mid-Summer, but Erik “Treatz” Wessén becomes a free agent this off-season. It wouldn’t be surprising if he elects to sign elsewhere after his postseason benching, forcing TSM to look for outside help.

But more than just individual play, TSM’s overall mentality needs to be questioned. The lack of followup to Mingyi “Spica” Lu’s five-man Lillia sleep against Gen.G was equal parts horrifying and baffling. The killer instinct is missing, and that is much tougher to remedy than any individual deficiencies. We’ll see if the coaching staff remains intact through this disaster.

In the most wide-open group of the four, Fnatic and Gen.G knew they would have their chances to advance. Every game would be winnable, but there would be no “free” games, either. In the end, Gen.G and Fnatic did enough to edge out LGD Gaming to become the two teams to advance to the quarterfinals.

Gen.G and Fnatic both started 2-1 in the first round robin. Both collected their wins over TSM, winning once more and losing once. Gen.G won a closely contested game against LGD Gaming, winning 21 kills to 17 in 45 minutes. Fnatic lost 12 kills to 4 against LGD, but they made up for it by beating Gen.G. Selfmade continued his stellar tournament with a 6/2/7 Graves performance to lead Fnatic to a 17 kill to 9 win in 28 minutes. After the first round robin, Fnatic, Gen.G and LGD Gaming were all tied at 2-1.

Both Gen.G and Fnatic then took care of LGD and TSM in the second round robin. Fnatic had the pleasure of officially eliminating TSM from contention, while Gen.G had to make a big comeback to avoid the upset. Fnatic similarly dominated LGD, while Gen.G struggled to a 19 kill to 16 win in 34 minutes. Fnatic looked like the best bet to advance in first heading into the final matchup.

NOTHING but CLEAN games tonight as we go 3/3 to secure 1st place in Group C! #Worlds2020 pic.twitter.com/zdHidhGzl9

Instead, the final game of Group C was all Gen.G. Their top side punished Gabriël “Bwipo” Rau’s Renekton early, setting Kim “Rascal” Kwang-hee’s Renekton up for success in the side lane. Meanwhile, Gen.G’s bot lane picked up 2v2 kills on Fnatic, giving Park “Ruler” Jae-hyuk’s Aphelios the tools he needed to snowball. With leads across the map, Gen.G quickly dispatched of Fnatic, winning 14 kills to 4 in only 23 minutes to secure first in Group C.

LGD Gaming looked terrible in the Play-In stage, there is no denying that. But what they did as a fourth seed in Group C cannot be overlooked. Remember, this is a team that finished 15th in the LPL in the Spring and re-made three-fifths of their roster heading into Summer. They underwent more mid-season changes than TSM.

Finishing the LPL Summer Split regular season as the 7th seed, and qualifying for Worlds as the 4th seed, LGD has come a long way. Unfortunately, the road ends here for now, but they'll be back and fighting next year. @LGDgaming appreciation thread👇 pic.twitter.com/P1ZPOItMfo

Even in their losses, LGD was really only non-competitive in their lone loss to Fnatic. They played Gen.G tough despite losing both matchups. LGD also proved they are much better than the top team in North America, which is probably the best case made for why the LPL deserves more slots at Worlds.

However, there may be changes ahead for LGD Gaming. Though they are a team that does not shy away from splashy signings, most of their starting lineup is set to become free agents in November. Only Han “Peanut” Wang-ho remains under contract through 2021.

Regardless of what happens, this roster performed well for the LPL and displayed great mental fortitude to come back from their disastrous start to Play-Ins. For an organization that has never had the opportunity to shed the “chokers” label handed at 2015 Worlds, this run was a step in the

Group play will conclude with day eight of the Main Event. The LPL’s top team Top Esports (3-0) are the favorites to advance in first, while the LCK’s DRX (2-1) are right behind them. FlyQuest (1-2) and the Unicorns of Love (0-3) round out the rest of the group. Day eight action kicks off with FlyQuest versus DRX on Sunday, October 11th at 1 a.m. PST.