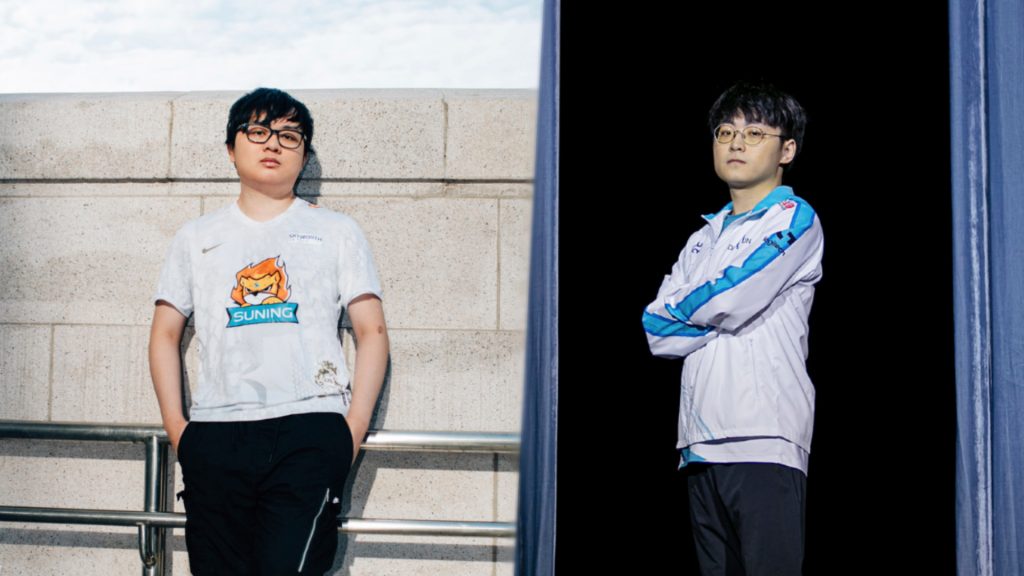 After a month of competition with teams from all over the world clashing in hopes to get a shot at eternal glory, the League of Legends World Championship will reach its climax on Saturday, October 31st, in the Pudong Stadium in Shanghai. On one side we find Suning, third seed of the LPL, who have earned the title ‘dark horse’ of the tournament. On the other side stands Damwon Gaming, first seed of the LCK, who came in as Worlds favorites and have only continued to confirm that label.

There has been a lot of action over the past few weeks before last weekend’s semifinals, so we’re here to refresh your mind. The path of Suning, the path of Damwon, and what to look forward to when the two teams will meet. You’ll find it all in our breakdown below.

A story of tremendous growth

Suning was not supposed to be in the grand finals by any means. The team finished in eleventh place in the LPL Spring Split, improved and ended third in the Summer Split, eventually grabbing a ticket to Worlds via the Regional Qualifier. Still, that’s as far as experts said Suning’s growth would go. The two dead-favorites from the LPL for the Worlds title were Top Esports and JD Gaming, who had made both LPL Split Finals this year. The consensus was clear: the LPL was sending two insanely good teams, and Suning and LGD, the third and fourth seed, were mostly there to get some nuggets of glory against lower seeds of other regions.

When Suning was seeded into the same group as G2, Machi Esports, and Team Liquid, most people thought that Suning would make it out and advance to the Knockout Stage. However, G2 was seen as the favorite in the group. Suning had other plans. From the get-go, they showed that they’re not to be trifled with. Their first game in the group, against G2, became an instant classic and remains as one of the most exciting games of Worlds this year. Suning made G2 sweat more than anyone had expected them to, and while Suning ended up losing, the tone was set. Suning would only lose one more best-of-one, against a surprisingly hungry Team Liquid. The rematch against G2 went Suning’s way, and so did the tiebreaker match for first seed in the group.

The quarterfinals, that’s where Suning’s story should have ended. They were paired against JD Gaming, who emerged second from Group B behind Damwon Gaming. Sure, second in the group may not have been the result JD Gaming had aimed for, but losing out to Damwon was not something to be ashamed of. Now, in the best-of-five setting, JD Gaming was definitely going to show what they’re made of, especially against Suning. Yet again, however, Suning had other plans. Whereas JD Gaming had struggled to find their footing in the meta, Suning seemed to be comfortable with their champions and felt far more like a coherent team than JD Gaming did. The series went 3-1 into Suning’s favor, who throughout the series only seemed to grow even more confident. Suning may have been an adolescent lion cub heading into Worlds, but they were full claws out now.

By the time they played in the semi finals, against Top Esports, Suning had convinced many of their strength. Especially since Top Esports came off the back of an unexpectedly difficult series against Fnatic, Suning should have at least a chance. That said, the record between these teams was heavily favored for Top Esports, with the last best-of-five series between the two being a clean 3-0 from Top. The series started off close. Suning overcame an early deficit in game one, but Top Esports struck back and tied the series. However, Suning was in the heads of Top Esports. All lanes aside from the mid lane went into Suning’s favor as the games developed, and at times Top Esports, once the celebrated pride of the LPL, straight up inted. Suning, now fully grown into the tournament and seemingly at their maximum potential, had forced their way into the grand finals.

Kings waiting for their crown

The story of Damwon Gaming follows a completely different narrative than that of Suning. Unlike their grand finals opponents, Damwon was already a clear favorite before the World Championship had even started. After a mediocre Spring Split, Damwon came back with a vengeance in the Summer Split and went on an absolute tear. Throughout the entirety of the Summer Split, they dropped only two games, tying for the most dominant run in a Split LCK history. Needless to say, fans of the region pinned a lot of hope on Damwon. Two years without even a team in the grand final at Worlds had begun to sting, but here was a contender to bring the Summoner’s Cup back home once again.

No matter how the group draws would turn out, Damwon would be a favorite in them. Still, when Damwon drew JD Gaming in their group, many fans reveled in excitement. Two tournament favorites in one group, now that’s a banger. But Damwon had no interest in keeping the ‘two tournament favorites’ label for Group B alive. In their first match, Damwon stomped JD Gaming with a 25-7 kill score in less than 25 minutes. There was only room for one king, and Damwon made it clear they were sitting down on the throne. Rogue and PSG Talon were no match either for Damwon. All the other teams held their breath. Could Damwon be beaten? Thankfully, JD Gaming proved that yes, even Damwon could be defeated in the return match. Damwon still ended the Group Stage with a 5-1 record, but gods could bleed after all.

But Damwon was quick to treat the wound and walk it off with a quick “‘tis but a scratch.” Matched against LCK second seed DRX in the quarter finals, Damwon had an incredibly favorable matchup ahead of them. Not only were they in a much better shape than DRX, the track record was glamorous too. In the LCK Summer Split finals, Damwon had marched over DRX with a quick 3-0, and they were looking to do so again. And they did. Exposing all the flaws that DRX had, Damwon broke almost no sweat eliminating their LCK brethren. It was the most one-sided quarter finals of all, and the wound that JD Gaming had inflicted in the Group Stage had healed without leaving a scar.

The Damwon train of domination rushed ahead in the semi finals. Their opponent: G2. It was a revenge match for many of the Damwon players. At the 2019 World Championship, this G2 lineup kicked Damwon out of the tournament in the quarter finals. This year, G2 looked weaker than last year, but much like Suning they had grown throughout the tournament. The first game went in Damwon’s favor with relative ease. Though it cost G2 a lot more energy to get a win, they did manage to grab back a game. However, Damwon was quick to shut down any potential momentum. The subsequent games were a party for the South Koreans once again. It came to a mind-blowing conclusion in game four, when Damwon defeated G2 in just 19 minutes—a World Championship record. Damwon had claimed revenge in astounding fashion. The Summoner’s Cup just one step away.

Look, there is no point in trying to paint a picture here that the finals will be a 50/50 between Suning and Damwon. When evaluating each team’s performances so far, Damwon stands out as a clear favorite. From the start until now, they have been dominant and have looked infallible. Damwon doesn’t necessarily punish every mistake that their opponent makes. But what makes them so scary is that they have the ability to do so at any given time. They have the skills to snowball a game with the tiniest of leads they get. Suning, on the other hand, have made clear mistakes, but brute-forced their way towards their victories. If Suning wants to stand a chance, they need to grow even further than they already have done so far at Worlds.

Still, the grand finals is about the clash between two rosters that have unique players and styles. And that alone is worth getting excited about. Suning’s Chen “Bin” Ze-Bin meets Damwon’s Jang “Nuguri” Ha-gwon. Bin, who often wins his lane because his jungler helps him out a lot, will have to hold his own against Nuguri, a top laner who knows match ups like few do, but who does have his ‘int games’ every now and then. Damwon’s Kim “Canyon” Geon-bu received a lot of praise for his Group Stage performance especially. However, there is no jungler who has been talked about as much as Suning’s Lê “SofM” Quang Duy, who has pushed the boundaries of the Worlds meta, most memorably with his ‘tank Lee Sin’ build versus G2. 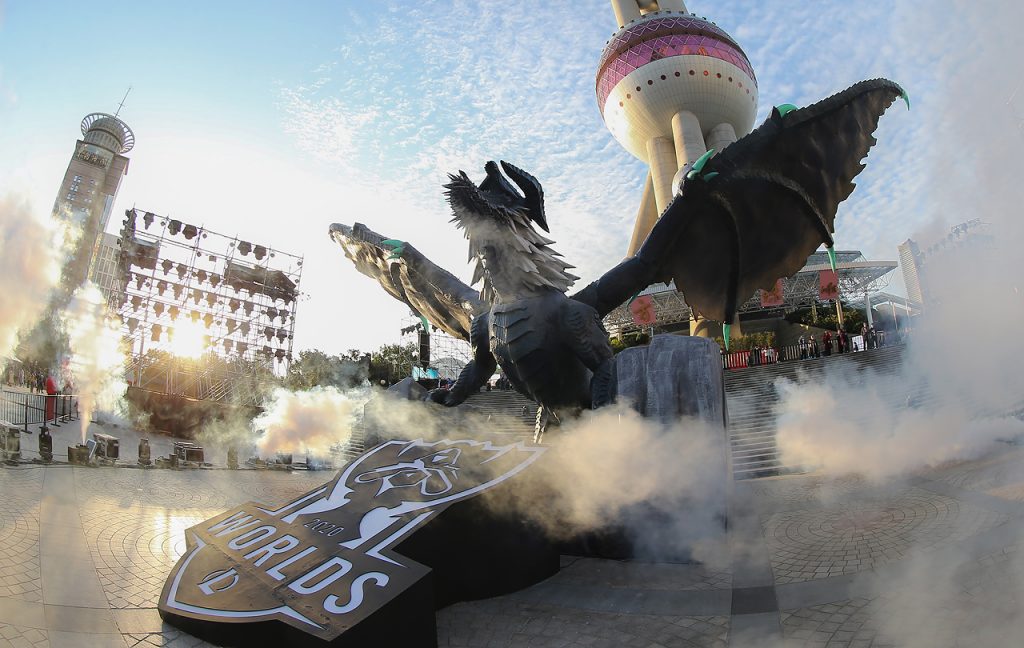 Both teams’ mid laners have been exactly what they needed to be: consistent. Xiang “Angel” Tao was not a player many were excited about heading into Worlds, but he has held his own impressively. Heo “ShowMaker” Su has been more impressive in that regard, but he carried a lot more excitement with him heading into the tournament. In the bot lane, the duo of Tang “huanfeng” Huan-Feng and Hu “SwordArt” Shuo-Chieh developed into one of the most punishing duos in the tournament, making clutch plays in teamfights to tip the scales in Suning’s favor. As sad as it may sound, Jang “Ghost” Yong-jun and Cho “BeryL” Geon-hee have not really been tested yet in their lane, often having quite an easy time farming until the roaming and teamfighting started. Perhaps against Suning, they’ll have to give it their all.

The grand finals of the League of Legends World Championship have been clean 3-0’s for three years in a row now. Many are predicting yet another one, and most of those predictions are in Damwon’s favor. It is looking to be a tough one for Suning for sure. But there is hope for some excitement. We haven’t seen either of the two finalists being pushed to their absolute limit yet. Neither have been on the brink of elimination. Perhaps, if such a moment arrives, we’ll see Suning and Damwon reach even higher levels of play than what they’ve shown us so far. Here’s hoping for a banger of a series.