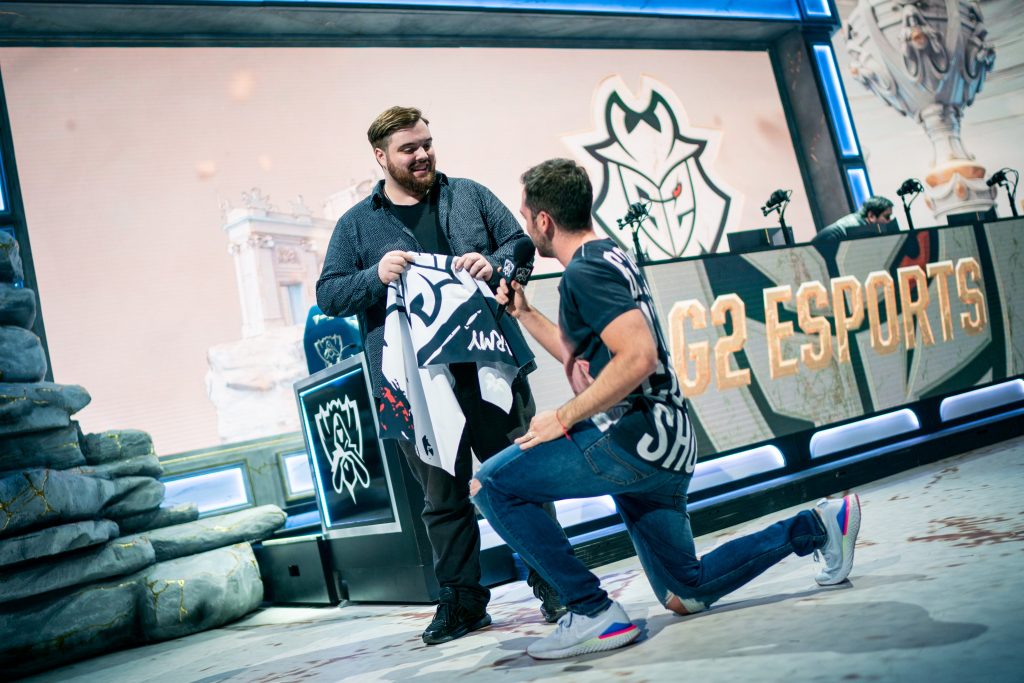 League of Legends’ Worlds 2019 quarterfinals have come to a conclusion in a predictable fashion. SK Telecom T1 and G2 Esports both took 3-1 victories and have advanced to semifinals. Splyce and DAMWON Gaming will be departing Worlds alongside Fnatic and Griffin from yesterday. This weekend started with three Korean and three European squads, now only one from each region stands. 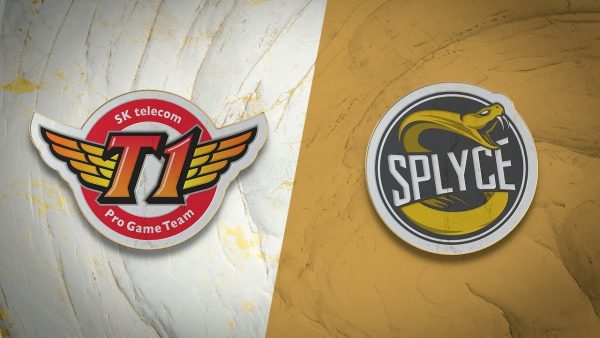 Splyce had some success on the bot side, with Tore “Norskeren” Hoel Eilertsen’s Blitzcrank getting his team multiple kills. However, once mid game rolled around Splyce’s plays stopped working. At around 19 minutes in, SKT turned Splyce’s forced engage around and picked off Norskeren and Vizicsacsi in the mid lane. SKT used the numbers advantage to take a 20-minute Baron.

SKT marched on Splyce’s base, taking four kills and an inhibitor. After earning one more uncontested Baron, SKT again killed four in front of Spylce’s Nexus and ended the game in 29 minutes.

In an attempt to take initiative, Splyce started game two with a tower dive onto SKT’s bot lane. While the first two kills were gotten by Kasper “Kobbe” Kobberup’s Kai’sa, Splyce also lost two. While in this neutral game state, Clid’s Elise put on a master class on how to impact the map. From the 6 to 14-minute mark, Clid helped his team earn two kills, two Dragons, Rift Herald, and first tower.

The next major fight came at 17 minutes, with SKT taking a 3-for-1 trade and another tower. Splyce again tried to make plays in the mid game, but SKT were always one step ahead. The Koreans took an uncontested Baron at 22 minutes and used it to close the game out at 26 minutes.

This game would be Faker’s 100th win in Riot-sponsored international events. He is, undoubtably, the best League of Legends player ever, and his career isn’t over yet. 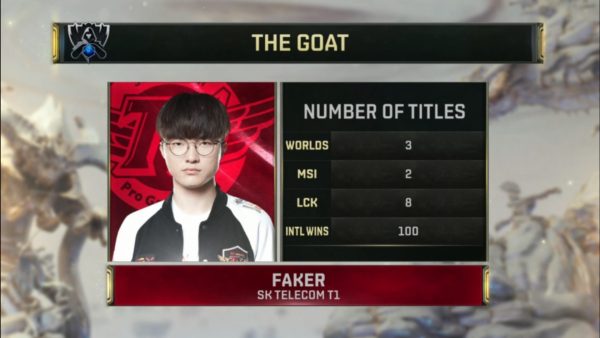 Looking to take their victory lap, SKT subbed in long-time veteran and former world champion Cho “Mate” Se-hyeong. He even picked Thresh so he could use his Samsung White skin. Faker even picked Azir, a champion very seldomly seen this Worlds.

Splyce wouldn’t take kindly to being disrespected and took 3 early kills and two Infernal Dragons. While SKT did trade the Rift Herald and first tower, Splyce would use their pressure to break three towers in a row.

At 16 minutes in, SKT forced a big engage in mid lane resulting in Park “Teddy” Jin-seong cashing in on Draven with a triple kill. However, SKT couldn’t find another avenue to force. After Splyce farmed up key items, they won a key fight and wiped SKT off the map. Splyce took their first Baron of the series and had control of the game.

After breaking the base Splyce set up for a second Baron. Looking to make a game changing play, Clid attempted a Flash Skarner ultimate on Kobbe’s Kai’sa. Kobbe hit a perfect Zhonya’s Hourglass, saving his life and killing Clid. After killing Baron, Splyce walked into SKT’s base at 30 minutes in and took everything they had left.

With a sense of seriousness returning to SKT’s draft, Khan used a Quinn pick to bully Vizicsacsi’s Renekton in top lane. With Clid’s help, Khan got first blood and proceeded to build a lead. After taking an Infernal Dragon, SKT looked to dive bot lane. However, a teleport by Marek “Humanoid” Brázda helped to turn this around, resulting in a kill to Kobbe’s Kai’sa.

Splyce were able to take an Infernal Drake of their own, but two kills by SKT in the mid lane helped to secure first tower and a second Infernal Drake for the Koreans. Looking to stay even, Splyce collapsed on SKT’s recalls and earned three kills for themselves. Once again, SKT were able to build a lead out of an even game state with multiple isolated kills and objectives taken.

At 25 minutes in, SKT won a 3-for-1 fight in the top side river and took Baron. With their eyes on semifinals, SKT killed off the defenders and took down Splyce’s Nexus in 31 minutes. 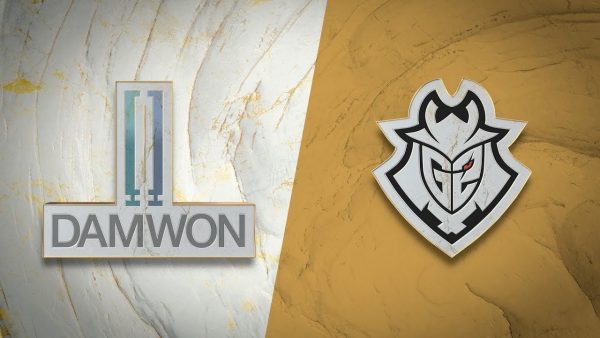 In an attempt to pressure the opposite side, Kim “Canyon” Geon-bu’s Lee Sin and Heo “ShowMaker” Su’s LeBlanc attempted a 4v2 gank on G2’s bot lane. However, Luka “Perkz” Perković’s Xayah and Mihael “Mikyx” Mehle’s Rakan were able to outplay the gank and killed Cho “BeryL” Geon-hee’s Leona while escaping.

DAMWON were able to return to the bot lane and this time were successful, resulting in a Mountain Dragon followed by Rift Herald. Despite this, G2’s lane pressure and farm leads led to a tower and gold advantage for the whole game. G2 looked set to bleed DAMWON out of the game, until the Korean side turned G2’s Barron attempt against them.

Three kills and a tower had cut the gold deficit, but not removed it. DAMNWON couldn’t take Baron because of a Super Minion wave on their Nexus. G2’s next Baron attempt would be much cleaner, earning four kills while only losing one. They immediately ran into DAMWON’s base and took game one in 34 minutes.

The longest game of this Worlds series began quickly, with six kills happening in the first four minutes. G2 claimed four of them, including first blood onto Wunder’s Jayce. Looking to fight back, DAMWON collapsed on Jankos’s Elise and took Infernal Dragon and Rift Herald.

DAMWON would take a flurry of objectives across the map. At 25 minutes in, they forced an engage on G2 in mid lane. A 4-for-1 fight led to Baron for DAMWON. However, G2 killed three members of the recalling DAMWON, slowing their Baron power play.

Needing another Baron, DAMWON once again forced a fight which ended in a 4-for-1. This time, DAMWON were able to stabilize and use Baron to break G2’s base and clean up objectives. While one more Baron was required to bring the Nexus down, DAMWON never faltered and evened up the series after wiping G2 at their Nexus.

G2 opted into a more traditional composition for game three. They used the lane pressure from Perkz’s Kai’sa and Mikyx’s Nautilus to force a dive onto the Yasuo Gragas bot lane of DAMWON. An early roam from Caps and Jankos allowed G2 to claim three kills, but ShowMaker’s teleport in response netted him two of his own.

G2 would return to the scene of the crime and continue to bully the Yasuo Gragas lane by killing them again. In response, DAMWON moved top side and forced a Rift Herald fight. It ended in a 2-for-2, but with them securing the Herald and using it to get first tower.

During mid game, G2 were able to out rotate DAMWON and pick up kills and objectives. Once Perkz’s Kai’sa and Caps’s Ryze had items, G2 forced a fight in mid lane. Picks onto Canyon and ShowMaker, resulted in a 28-minute Baron for G2. The European squad would make quick work of DAMWON’s base and went on match point.

With their lives on the line, Canyon picked his Taliyah jungle which was undefeated at Worlds. In an attempt to get aggressive in G2’s top side, Canyon was killed by a roam up from Caps’s Yasuo. That pressure snowballed into a kill on Nuguri, giving G2 a solid early lead. They used it to dive Canyon and Nuguri a second time.

DAMWON were able to secure two kills and a Dragon from their bot side play, but Nuguri kept getting killed by dives. By 10 minutes, he was 0-4-0.

Despite this deficit, DAMWON was able to secure picks onto G2 during mid-game, never letting the game get out of reach.

At 25 minutes in, G2 engaged on DAMWON in the mid lane, earning three kills. G2 secured the Baron, but lost two in an over-chase. With G2 regrouped and pushing on DAMWON’s base, the Koreans made an all or nothing engage call on the top side. While they did get a few kills, the G2 collapse was too strong. G2 aced DAMWON and closed out the series in 30 minutes.

The top four teams of Worlds 2019 have been locked in: Invictus Gaming and FunPlus Phoenix from the LPL, G2 Esports from the LEC, and SK Telecom T1 from the LCK. The matchups are IG versus FPX and SKT versus G2. One Chinese team is guaranteed to be in finals, while Europe and Korea will battle it out for that honor. Also, for the first time ever, there could be two previous world champions in IG and SKT battling to be kings once again. The Worlds semifinals begin on November 2 at 7:00 a.m. EDT on Twitch and YouTube.