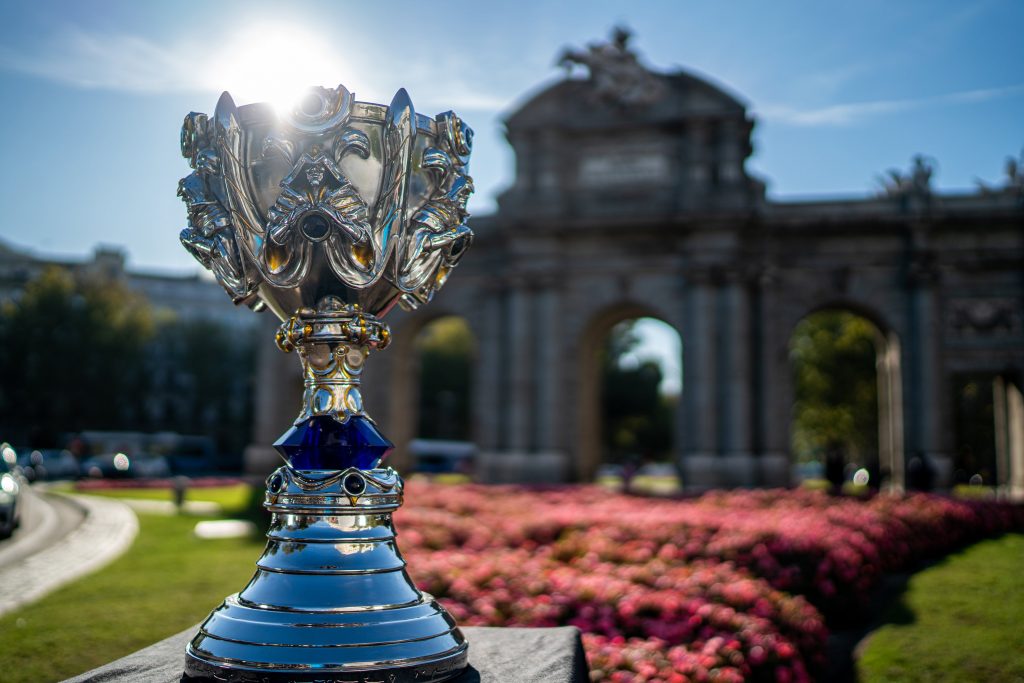 League of Legends 2019 World Championship headed to Madrid, Spain for the quarterfinals and semifinals. (Image via Riot Games)

It was a banner day for the LPL at the 2019 League of Legends World Championship. Both Invictus Gaming and FunPlus Phoenix took 3-1 victories in the quarterfinals to advance to the semifinals, guaranteeing that we will see a Chinese team in the finals. Griffin (LCK) and Fnatic (LEC) each became the first team from their region to be eliminated from the tournament.

Read Also: What Attending the 2019 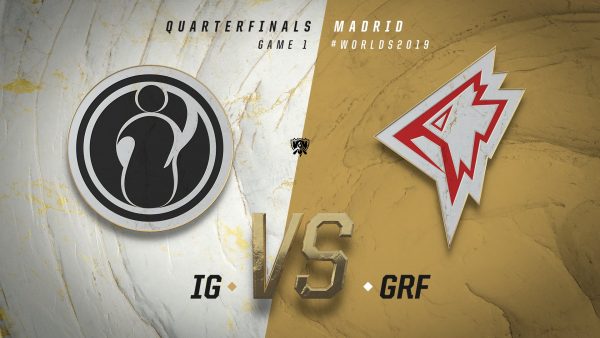 The first teamfight of the series, though, was all Invictus Gaming. Tarzan secured the Rift Herald kill for Griffin, but iG cleaned up the fight. Kang “TheShy” Seung-lok kicked it off, but the big factor was Griffin’s inability to get on Kog’Maw. JackeyLove free fired for a triple kill and iG wiped the fight five kills to zero to blow open the gold lead.

With Baron and Elder Drake secured at 31 minutes, iG had the tools to close out game one. Griffin made it interesting with their wombo-combo team fights, but iG always ensured one of Yasuo, Qiyana, or Kog’Maw was left alive to clean it up. iG won game one 22 kills to 18 in 44 minutes.

Another game, another infernal and Viper First Blood start for Griffin. Griffin drafted heavily for the early game, picking Jarvan IV for pressure and Galio mid to support side lane plays. While excellent for them to pick up the early advantage, it was also necessary and expected given the scaling nature of iG’s Kayle and Kai’Sa composition.

Griffin had the perfect drake spawns to accelerate the game, but Gao “Ning” Zhen-Ning and iG were prepared. They beat Griffin to the play on consecutive mountain drake spawns, cutting down Griffin’s ability to rush down Baron or quickly knock down turrets.

Griffin started Baron at 25 minutes, but could not burn it down without those mountain drakes. They then tried to peel off as iG collapsed, but TheShy flashed into three on Kayle and Song “Rookie” Eui-jin’s Leblanc picked up a triple kill to turn the game. Now with the gold lead and scaling advantage, iG were in control. It took another ten minutes of valiant fighting from Griffin, but the inevitability of Kayle came through. iG closed game two up 18 kills to 15 in 35 minutes.

Griffin had their worst start to a game in the series to open game three, so of course it would lead to their first win of the series. iG took advantage of Sword’s Kayle in the early game to pick up two kills, but you can only hold a Kayle and her team down for so long.

That was on full display at only 12 minutes, as Sword had an incredible ult in the middle of iG in a Rift Herald skirmish to secure a fight win. Griffin picked up three kills and opened up a 2k gold lead in the blink of an eye.

iG looked like they would pull back into the game with a fight at 29 minutes, but Viper had other ideas. TheShy got huge AoE damage off with his signature Vladimir, but Sword had a well timed Kayle ult to negate some damage. Viper’s Xayah pulled back her feathers perfectly to CC iG and pull off an incredible penta kill with a sliver of health to seal a win for Griffin. Viper finished 8/0/6 in the 36 minute win for Griffin.

iG picked up their first First Blood of the series as Ning’s Gragas donated a kill to TheShy’s Kayle top lane. Of all the potential First Blood scenarios in the game, that was absolutely the worst-case scenario for Griffin.

What followed was pure carnage in top lane. Sword’s Jayce needs to snowball the Kayle matchup or the game is over. So when Kayle was zoning Jayce out of lane at 10 minutes, Griffin were already on life support. Two more kills for iG at Rift Herald at 13 minutes was just more confirmation that Griffin needed a miracle to prolong the series.

That miracle did not come on this day. iG made no mistakes, taking their early game lead with their late-game composition and smothering Griffin into submission. iG needed only 25 minutes to secure their spot in the semifinals, winning 16 kills to 4. TheShy’s Kayle finished the game 8/0/6, compared to Sword’s 0/6/1.

Griffin entered the tournament dealing with internal drama as dismissed head coach Kim “cvMax” Dae-ho pulled back the curtain on behind the scenes fights with manager Cho Gyu-nam. One point of contention between the two was in top lane, as cvMax supported Choi “Doran” Hyeon-joon but Cho preferred Sword.

We’ll never know how Doran would have fared, but TheShy thoroughly dominated Sword throughout the series. Griffin had leads in the mid game in both games one and two, but could not hold up when TheShy joined team fights. It was surprising that Doran was never given a chance in the series to change the dynamic.

Griffin also came into the championship being labeled chokers for their inability to come through in the highest stakes matches. They will now leave the season without a best-of-five win after falling to Group D’s second seed. Griffin played well in the Group Stage, but once again fell flat in a high pressure best-of-five. 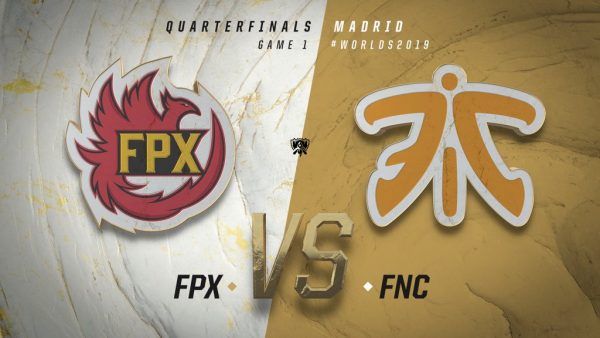 Fnatic threw a curveball in the opening draft, picking Rengar top lane for Gabriël “Bwipo” Rau. That, coupled with Tim “Nemesis” Lipovšek’s Twisted Fate, was meant to give Fnatic side lane priority throughout the game.

The pick looked genius early on as Bwipo solo killed Kim “GimGoon” Han-saem’s Camille at level 2. Bwipo held up his end of the bargain in controlling the side lane, but Fnatic had a hard time with Kim “Doinb” Tae-sang’s signature Ryze in mid lane. Doinb participated in the first 12 kills of the game for FunPlus Phoenix and dominated team fights.

A pick around Baron at 23 minutes was enough to secure Baron and a quick close from FPX. Without a large lead, Fnatic had no hopes of fending off the team fight from FPX. Doinb finished 5/0/11 in the 26 minute win for FPX.

Fnatic had better scaling this game with Bwipo’s Gangplank, so they still had a chance despite the poor early game. But as we keep noting, you can’t have a poor early game against Kayle, especially not when she’s in the hands of FPX’s star.

FPX used their gold lead and double mountain drakes to secure a very early Baron at 22 minutes. After they finished cleaning up the contesting members of Fnatic, FPX marched down bot lane to quickly close the game out. Lwx finished 11/0/6 in FPX’s 18 kills to 3 win in under 25 minutes. Rekkles had the only three kills of the game for Fnatic.

Just like Griffin, Fnatic did not go down without a fight. Zdravets “Hylissang” Iliev Galabov struggled in the first two games, but he looked much better in setting up plays bot lane in game three. His Headbutt-Pulverize combos gave Rekkles an early lead on Kai’Sa in an otherwise poor matchup into Lucian.

Fnatic also drafted a much easier to execute composition, using Bwipo’s Ornn and Nemesis’ Veigar to set up engages for Hylissang and Mads “Broxah” Brock-Pedersen’s Lee Sin to follow up on. Fnatic pushed all the way to the FPX nexus turrets at only 18 minutes, calling FPX’s bluff on a push top.

Doinb’s Ryze valiantly saved FPX’s base on two occasions, but a failed dive onto Fnatic mid lane at 26 minutes ended their hopes of a sweep. Rekkles cleaned up three kills to finish 8/2/9 in Fnatic’s 20 kills to 11 win in under 27 minutes.

Fnatic beat Doinb’s Ryze in game three, but that didn’t deter FPX from going back to their best pick in game four. The signature pick from the LPL’s signature player of 2019 carried FPX to a semifinals berth against their fellow LPL team.

Gao “Tian” Tian-Liang was active early and often in the closeout game, participating in 18 of 21 kills and giving his solo lanes leads that they would never relinquish. A four kills to one team fight win at 27 minutes opened up a 5k gold lead for FPX, allowing them to knock down Fnatic’s bot inhibitor.

Fnatic tried to stall out long enough to scale with Kayle, Cassiopeia, and Kai’Sa, but FPX finished the series off after another Baron. Tian and Doinb picked up a double kill apiece in the final team fight as FPX won 21 kills to 8 in 35 minutes. Doinb finished a deathless 9/0/7, while Bwipo and Nemesis combined to go 0/13/6 in the loss.

If you told Fnatic and their fans that they would lose in the quarterfinals after week one of the Group Stage, they probably would’ve taken it. They barely scraped by Clutch Gaming and looked lost in their defeats to SK Telecom T1 and Royal Never Give Up. But after their sweep of the second round robin, it’s fair to say that they’ll be disappointed in dropping this series to the worst-performing one seed from the Group Stage.

FunPlus Phoenix looked much improved during the week off, but Fnatic never got their side lane game plan off the ground. After being unable to execute it in the first two games, Fnatic ditched it for more team fight centric compositions in the final two games. It worked once, but FPX controlled game four from start to finish.

Fnatic have their entire core under contract through next year, so they should be able to build on this year as the team grows around Nemesis. They are a perennial contender and will look to challenge G2 Esports for LEC supremacy in 2020.

Quarterfinals continue tomorrow on Twitch at 7:00 a.m. EDT. It will be SK Telecom T1 versus Splyce Gaming and then DAMWON Gaming versus G2 Esports.