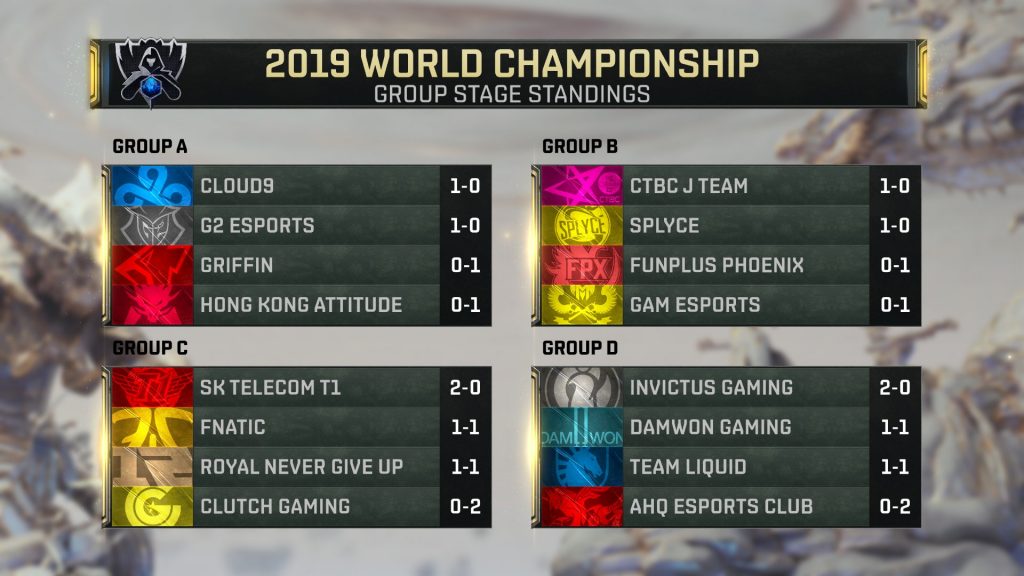 Day two of the League of Legends Worlds 2019 Group Stage has come to a close. The meta is starting to come together, featuring many long games. Of the six played today, half of them lasted around 40+ minutes. While scaling comps are prevalent, there are still many ways to force early fights and try to win before too long.

The first game of the day saw the group of death favorites in SK Telecom T1 and Royal Never Give Up go head to head. Pick and ban phase saw SKT grab a fairly standard team comp with the exception of a Twisted Fate for Lee “Faker” Sang-hyeok. RNG responded with a more unique draft, opting to take Blitzcrank, Mordekaiser and Zoe.

Once the game began, SKT’s game plan became apparent. They would use their teleports and TF ultimate to split the map and go for side lane pressure. Faker warped to the bottom lane multiple times, setting Jian “Uzi” Zi-Hao’s Xayah behind early.

However, RNG would stabilize and win many mid game fights thanks to the pick squad of Blitz, Zoe and Lee Sin. Uzi got his gold and became a real carry threat. The game stretched into the late game, and after three Barons and an Elder Dragon, SKT used their teleports to get Khan, Faker, and Teddy into the base of RNG. With Kim “Clid” Tae-min and Lee “Effort” Sang-ho slowing the recalls, SKT took the Nexus of RNG and ended the game in 42 minutes.

The first Europe versus North America matchup of Worlds took place between two teams who need a win to stay competitive in their group. Right off the bat, Clutch Gaming left Yuumi unbanned and Fnatic took her and Garen in a heartbeat. Their response was the first Bard pick of the tournament. Fnatic finished their comp with a Shen and Akali for tankiness and dive. Clutch went the opposite direction, drafting Tristana top lane and Orianna.

Nam “Lira” Tae-yooira on Elise had his best early game in a while, shooting out to a 4/0 scoreline. Gabriël “Bwipo” Rau was on the receiving end of ranged top laner bullying and died multiple times early. The Bard pick even showed up, catching Yuumi in stasis resulting in her death. Clutch took many more turret plates and had a good lead going into mid game.

However, the strength of Yuumi and Garen would soon shine through. The Bard and Elise pick squad fell off in effectiveness, their only real target being Garen who would just get peeled by Yuumi. Unable to fight due to a lack of frontline, Clutch were choked out of the game until Fnatic could just walk in and end the game in 40 minutes. Zdravets “Hylissang” Iliev Galabovès Yuumi has to be respected in draft from now on.

For a total of 40.3k damage dealt to champions, @FNCHylissang's Yuumi did 1,033 DPM v @ClutchGaming.

Group D’s games began with another clash of undefeated teams. Team Liquid’s draft saw them take Gragas plus the lover’s duo bot lane. Invictus Gaming responded with Olaf, Kai’sa and a seldom seen Fiddlesticks support. With solo laners left until last, both teams opted for a scaling top laner in the Gangplank versus Vladimir matchup.

A couple of skirmishes early on helped TL to a small lead. They took the first two dragons and first tower to grow their lead to 2.5k gold at 20 minutes. IG opted out of fighting and chose to play the farming game.

TL were unable to snowball their lead into any more major objectives. Kai’sa and Vlad just kept getting bigger and bigger while Liquid failed at forcing fights. An uneventful mid game led to one big Baron control teamfight in which IG wiped the floor with TL thanks to a Fiddlesticks-Orianna ultimate combo. IG took Baron and sieged TL’s base on their way to a 34-minute victory.

The winless teams of Group D matched up in the least bloody game of the day. The draft didn’t hint at this, with both teams drafting high damage and engage team comps. Damwon Gaming opted into a Leona Kai’sa bot lane to help Akali, Camille and Lee Sin get to the backline of ahq. Qiyana, Jarvan and Rakan were the divers ahq e-Sports Club picked, as well as a lesser-used Rumble to try and lay the Equalizer on trapped enemies.

However, first blood didn’t happen until 12 minutes in, when ahq caught Kim “Canyon” Geon-bu’s Lee Sin around their red side jungle. However, DWG collapsed as a team onto ahq, killing everyone except Chen “Ziv” Yi’s Rumble. Three Dragons and a Rift Herald later, DWG had a 3k gold lead.

Despite a few solo kills by ahq’s solo laners, the deficit was too much for their comp to make up. DWG took an uncontested baron at around 22 minutes. They would use it to walk into ahq’s base and destroy their Nexus after a familiar four-for-one team fight win in 28 minutes.

We won against AHQ. This victory is worth not sleeping during late midnight matches. We are really appreciated for cheering us. We hope you can sleep tight.

However, G2 would show a great game plan in putting Renekton behind early with repeat ganks in top lane. In response, Lee “Tarzan” Seung-yong’s Taliyah got herself ahead in the jungle with a farm and kill lead. G2 had a small gold advantage going into mid game thanks to good macro rotations and tower takes.

The first big team fight came at 21 minutes. A 2-0 fight with kills onto Renekton and Nautilus helped G2 set up for a Baron take shortly after. From there, the game would spiral out of control for Griffin. Their comp had been out-scaled, and after bleeding more objectives and kills, G2 would end the game at 30 minutes.

The MSI Champions @G2esports dominate @TeamGriffinLoL to kick off their #Worlds2019! pic.twitter.com/z29oGg8fO0

The last and longest game of the day was between Cloud 9 and Hong Kong Attitude. The pick and ban phase took a strange turn early, with C9 taking Heimerdinger in the first rotation. They paired Irelia and Renekton with it for AD in their solo lanes. HKA’s response was to draft the Yuumi-Garen botlane. Their AD came in the form of a Tristana mid.

While the kill count started out even, Dennis “Svenskeren” Johnsen’s map control on Elise afforded them two Dragons and Rift Herald by 15 minutes. More skirmishing and objective trading ensued, but C9 never lost their initial gold lead. HKA did get close though. Around 30 minutes, the Yuumi-Garen duo helped them win multiple fights in a row. Wanting to end sooner rather than later, C9 opted into a Baron force.

Despite kills going over to both sides, C9 managed to secure Baron. They would start sieging HKA’s base, but faltered along the way, losing three members. However, this would only stall out the game. C9 recovered. After a second, cleaner Baron take thanks to Eric “Licorice” Ritchie’s Renekton triple kill, they closed out this marathon of a game in 47 minutes.

A little stumble in the lane phase, but @Licorice on Renekton showed up big to the team fights and helped @Cloud9 secure their first #Worlds2019 win over @HKESports_Ltd pic.twitter.com/vVvXJwS3Up

Overall, day two was not too out of the ordinary. Every favorite ended up winning their game, except possibly the TL vs IG game. We have seen a rise in damage across team comps, as well as many aggressive picks. Despite this, many teams have still played passively. Champs like Elise and Renekton haven’t been present in many 40+ minute matches where they win after all. Whichever teams adapt to their opponent’s playstyles will have a great advantage in the coming four matches.

Return for more Hotspawn coverage of League of Legends Worlds 2019!