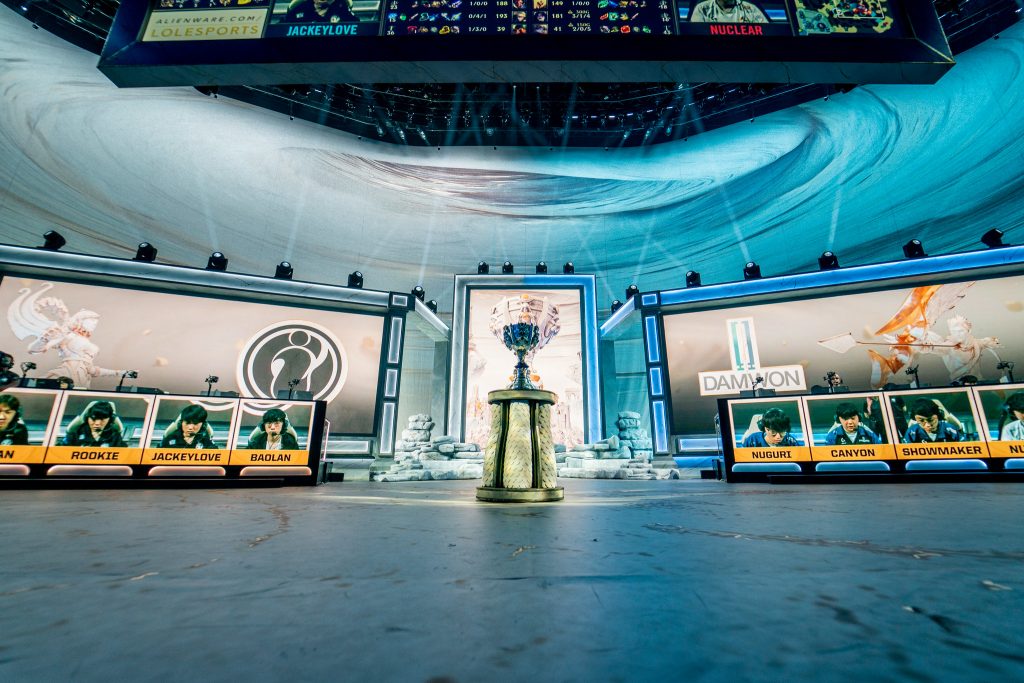 Day three of the Worlds 2019 Group Stage is done. (Image via Riot Games)

We’re through day three of the 2019 League of Legends Worlds Group Stage. DAMWON Gaming and Team Liquid wins mean a three-way tie at the top of Group D, while wins from FunPlus Phoenix and GAM Esports give all Group B teams a 1-1 record. Group A favorites Griffin and G2 Esports took care of business in convincing wins over Hong Kong Attitude and Cloud 9. Let’s take a closer look at how it all went on day three of the Group Stage:

The prevailing opinion heading into Worlds was that Invictus Gaming would have a bot lane advantage over DAMWON Gaming. Kim “Canyon” Geon-bu made sure that wasn’t the case in this one, visiting bot lane twice in the early game to get DWG off to an early lead. Cho “BeryL” Geon-hee’s pocket pick Poppy turned out to be instrumental as well, utilizing her W – Steadfast Presence to negate the high mobility composition from iG. Sin “Nuclear” Jeong-hyeon’s Kai’Sa exited the laning phase 3/1/4, compared to Yu “JackeyLove” Wen-Bo’s 0/4/1 Ezreal.

iG didn’t go down without a fight, picking up a pair of mid-game team fight wins off the back of Kang “TheShy” Seung-lok’s exceptional Akali play. They even picked up the first inhibitor of the game at 32 minutes.

But a pick onto iG’s Wang “Baolan” Liu-Yi a minute later led to a DWG Baron take and eventual ace of iG. DWG’s Kayle and Kai’Sa had scaled into the late game and iG no longer had the ability to fight 5v5 fights, allowing DWG to secure Elder Drake and, shortly afterwards, the win.

Nuclear finished the game 7/2/10 on Kai’Sa, quieting any doubts about DWG’s bot lane.

Needing a win to keep pace with DAMWON Gaming and Invictus Gaming in Group D during the Group Stage, Team Liquid were anything but sharp against the winless ahq e-Sports Club. It began with a missed Rumble ban in champion select, as Team Liquid Manager Michael Artress explained:

Talked with Core just now – after rebooting the computer, his client and keyboard were in English (as normal) but the champion names were in Korean. He wasn’t able to type 럼블 (the Korean name for Rumble). https://t.co/LeOOC9gAd3

TL took a lead in the early laning phase, but that momentum was extinguished in the mid-game. Wang Tsung-Chih’s Nautilus hit hook-after-hook, particularly on Nicolaj “Jensen” Jensen’s Orianna, to give AHQ the advantage in the fights and skirmishes over TL. AHQ picked up the first Baron and held a 7k gold lead as they started their second Baron attempt.

AHQ got that Baron low and committed to burning it down, even as Jake “Xmithie” Puchero came within steal range. That was a mistake. Xmithie stole Baron to give TL a new lease on life and the LCS team knew how to use it. Another hook on Jensen turned out to work in TL’s favor as Jung “Impact” Eon-yeong’s Renekton turned around a 1v3 and TL pushed AHQ back into their base. It was far from perfect, but TL managed to push their way through to the Nexus for the win.

FunPlus Phoenix were one of the favorites to win it all heading into the tournament, but they were staring at a 0-2 record in what has been considered the easiest group in the field. LEC Play-in Splyce were the more comfortable team in the early game, executing a four-man dive bot and taking a notable gold lead. A team fight win at mountain drake gave Splyce a commanding 3.5k gold lead at 22 minutes.

FPX didn’t allow Splyce to build on that lead, cutting it back under 3k at 27 minutes. Splyce found a pick onto Liu “Crisp” Qing-Song’s Leona and quickly turned onto Baron. Splyce tried to stop damage on Baron as FPX approached, but Gao “Tian” Tian-Liang’s Lee Sin was still able to execute it and FPX wiped the 4v5 team fight 5 kills to 0, acing Splyce. Lin “Lwx” Wei-Xiang’s Kai’Sa picked up an impressive triple kill in the onslaught.

Crisp’s pick onto Marek “Humanoid” Brázda’s Tristana at 33 minutes led to the game-sealing team fight win for FPX. FPX were able to clean-up a couple more members of Splyce and brute force their way into the base for a 35-minute win.

Needing a win to avoid being the only winless team in Group B, GAM Esports found a successful formula to beat J Team. GAM once again opted for a lot of engage in their composition, but this time they put Đỗ “Levi” Duy Khánh on Nocturne to allow him to create for himself.

That move paid off, as Levi consistently found ultimate opportunities as soon as it would come off cooldown. J Team could not find enough early-game advantages with their Elise, Lucian, and Syndra trio, spelling trouble against the diving death-ball of GAM’s Akali, Nocturne, Kled, Kai’Sa, and Nautilus.

GAM kept the JT in check until they were finally strong enough to brute force into JT, and that they did to close out their first win of Worlds. They led in kills 22-12 in their 39-minute win.

GAM bot laner Nguyễn “Zin” Tuấn Thọ was an impressive 7/2/8 on Kai’Sa in the victory.

Much like FunPlus Phoenix, Griffin were quickly faced with an unthinkable 0-2 start to the World Group Stage, but it only took a minute for their disaster to start. Son “Lehends” Si-woo’s Nautilus led a level one invade for Griffin, flash-hooking Hong Kong Attitude’s Lee “Crash” Dong-woo. Unfortunately for GRF, HKA’s entire team was waiting in the brush. Chen”3z” Han charged up an entire Sion Q – Decimating Smash and HKA routed GRF three kills to zero in the blink of an eye.

Fortunately for GRF, they still have one of the best junglers in the world in Lee “Tarzan” Seung-yong. Tarzan responded quickly, catching Crash out in the bot lane river and allowed     Jeong “Chovy” Ji-hoon’s Ezreal to clean it up with a well-predicted Q – Mystic Shot to settle down Griffin.

Once they were no longer threatened by getting blown out, Griffin controlled the pace of play throughout the rest of the game to pick up their first win at Worlds. They finished off HKA in 38 minutes, leading 16 kills to 9. Star mid laner Chovy finished a deathless 3/0/8.

Cloud 9 made an interesting roster decision, opting to bench reigning LCS MVP Dennis “Svenskeren” Johnsen for Robert “Blaber” Huang. Blaber has been tearing up EUW solo queue and is a feared early game jungler, but was not expected to earn stage time against perhaps the current favorite to win the World title.

Blaber was given his preferred early game champion in Elise and played well, tracking and getting the best of Marcin “Jankos” Jankowski early, but Cloud 9’s carries were no match for G2’s. Luka “Perkz” Perković and Mihael “Mikyx” Mehle absolutely demolished C9’s bot lane, taking a large CS lead while picking up kills without help from their teammates.

Rasmus “Caps” Winther did not necessarily dominate Yasin “Nisqy” Dinçer in lane, but he was easily the more influential player on the map, roaming top and bot to land crucial Zoe bubbles and dealing immense poke damage.

Eric “Licorice” Ritchie crushed his 1v1 against Martin “Wunder” Hansen, but it made no difference as G2’s carries bullied their way around the map. G2 won every skirmish and looked every bit of the best team in the world in doing it, doubling C9 in kills 26-13 in their 25-minute win.

The Group Standings after three days of play! #Worlds2019

Little separation has occurred during the Group Stage so far, but things could change quickly on day four. SK Telecom T1 and G2 Esports have a chance to make it through their first round-robin undefeated, playing the winless Clutch Gaming and Hong Kong Attitude. Royal Never Give Up and Fnatic will battle it out for the advantage in Group C, while Cloud 9 and Griffin will do the same in Group A. Two teams will also pull ahead of the wide-open Group B at the conclusion of the day.