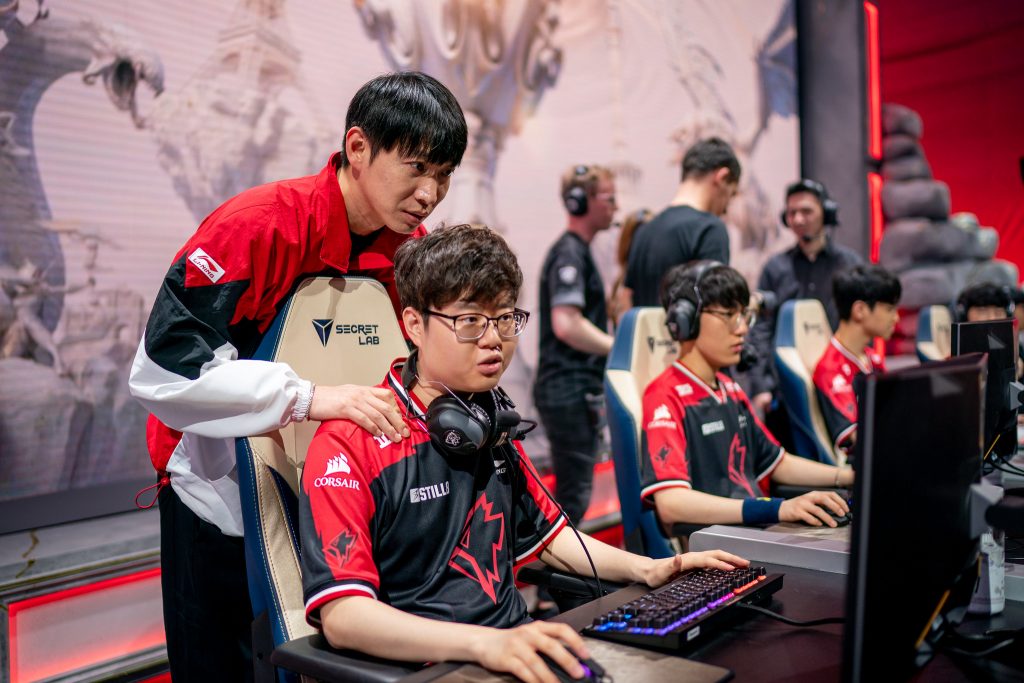 Griffin looks like a completely different team to the one that struggled in the first week of groups. (Image via Riot Games)

Today was make or break time in Group A of the Worlds 2019 Group Stage. With G2 starting the day as the undefeated winners, while Cloud 9 and HKA desperately fought to remain relevant. But a specter hung over the group. A sleeping Griffin, whose name had for much of the year always been followed by “chokes,” suddenly became one of the most dominating forces in the group stage and went flawless in one of their best-ever performances.

Heading into our first game of the day, Cloud 9 reversed their previous roster swap, with Dennis “Svenskeren” Johnsen returning to their starting lineup for their first two games. Cloud 9 needing to win this to escape groups once again, while Griffin needed to prove they’d overcome their off-the-rift issues with coaches and controversy.

Griffin started by banning away the Veigar for C9, while C9 blocked off the Yuumi lane. Rather than opt for mages in the bot, both teams switched with more traditional ADC picks. Overall, C9 picked an extreme dive and engage composition with global ultimates, while Griffin opted for individual lane pressure.

As the game kicked off, C9 immediately felt the power of Griffin’s champions, as first blood was secured of the mid lane dive, and a second kill found in the 2v2 engage in the top lane. With this early lead, Griffin proceeded to drag out the laning phase, their composition’s strongest point in the game. Because C9 relied on their ultimates for their largest advantage, this massively delayed their power spikes, and at the 11-minute mark, Griffin dived and aced their opponents, going up 7-0.

Things went from bad to worse, as Griffin began to shove down lanes. C9 couldn’t get anything going. And apart from a single kill onto Griffin’s Lee “Tarzan” Seung-yong, which required every ultimate the team had, the NA hopefuls rolled over. After 24 minutes, the game was finished, and Griffin victorious.

G2 entered this game looking to maintain their spot at the top of the group, against a team that had given them the hardest time so far. Not wanting to mess about, G2 picked up the super-strong Xayah/Rakan lane, with Ryze mid, and Kayle top. They allowed Hong Kong Attitude the Yuumi pick and were confident in outplaying their opponents. Notably, Marcin “Jankos” Jankowski on his Olaf would prove to be a crucial part of the G2’s draft and HKA’s downfall.

Early game, G2 looked for dives, but nothing materialized. As the laning phase progresses, G2 just wasn’t able to get any advantage. At 11 minutes, HKA pushing in using the strength of their champions and grabbed an easy Rift Herald, shortly after picking up a top tower. Amazingly, even after losing their gold lead and giving up several objectives, G2 seemed too confident enough to engage their opponents. After some fantastic individual outplays, G2 moved back into the driver’s seat as they began to take control.

At least that was a good flash @G2Jankos 😅

Something seemed to click with G2, and HKA found themselves losing every engage, being picked off, and unable to retaliate against G2. At 23 minutes, G2 secured the Baron, but with HKA still strong from their early game advantage, the match was far from over. It took another seven minutes for G2 to clean things up, as their opponents clung on, but eventually, the EU champs picked up the win. This had the added effect of eliminating both HKA and Cloud 9 from contention in one fell swoop.

With HKA out of contention, Griffin was playing to try and force a tiebreaker. And to help things along, HKA seemed to make a big blunder in bans, allowing the Yuumi Garen to get through without contention. Combined with the fantastic poke potential of Elise and Jayce, and the raw early game bullying of Camille, Griffin looked well equipped to win the game. Meanwhile, HKA found themselves on individually strong champions like Lee Sin, Syndra, and Xayah, but little in terms of overall team composition.

As the match began, this lack of synergy was apparent, as Griffin quickly forced flashes in both the top and bot lane. But amazingly, after an incredible outplay, HKA’s Chen “3z” Han grabbed a pair of kills in the top lane and rocketed his team into the lead.

After this amazing individual performance from their top laner, HKA could dig their heels in and try and slow down Griffin’s power spikes. And it seemed to be working. 3Z was generating a considerable lead over Griffin’s Choi “Sword” Sung-won, and the rest of HKA was able to grab the game’s first tower on the back of his play. But in the meantime, Griffin had taken a pair of Infernal Drakes, and in an all-out fight, they’d clearly defeat HKA. At 20 minutes in, Griffin tested this theory, pushing their opponents off the mid tower and grabbing several kills in the process. From this point, there was nothing HKA could do. The Yuumi, with its incredible poke, was sat on an unkillable Garen, and Griffin shortly after secured their victory.

With nothing left to play for, Cloud 9 would now have to play the role of spoilsports, as they faced off against G2. The North Americans could foil G2’s hopes of leaving groups as top-seed if they defeated them here. And to do so, the team started by banning Yasuo, Yuumi, Irelia, and Renekton. G2 countered by taking away some of C9’s unorthodox picks, like Veigar and Heimerdinger. For lanes, we saw the battle of the hooks in the bot lane, with Mihael “Mikyx” Mehle’s Blitz taking on Tristan “Zeyzal” Stidam’s Thresh.

As the game started, the C9 attempted to get an advantage in the top lane, but as they engaged with G2, the Ryze and Rek’ Sai combo easily 2v3’d a level one Kayle, Lee Sin, and Cassiopeia. And from there, Wunder’s Ryze took control. And after this, C9 seemed to fall apart. But G2’s trademark sloppy play, the casual nature they appeared to be taking the game, and some questionable engages allowed C9 to stay in view of the vast lead G2 was generating.

The majority of this game was a mess. Every fight seemed to involve trade kills, G2 performed questionably at every turn. But their raw talent and gold lead meant the game was never really in question. A pair of Barons secured, G2 grabbed a final engage, wrapping up the game in a (long for G2) 31 minutes.

Cloud 9, without anything to play for, tried subbing in Matthew “Deftly” Chen and Robert “Blaber” Huang to give a different look to their team. In the draft, both squads stuck to standard meta bans, by taking away things like Tristana, Renekton, and Yuumi. HKA opted for its comfort picks, such as Lee Sin, Thresh, and Jinx, while C9 prioritized giving good champions to its pair of subs, picking up the Kai’sa first and the Ekko in the second round.

Starting off the match, both teams played their lanes cautiously, waiting for jungle help rather than attempting anything too complicated. From this, C9 was able to get a small lead by generating more jungle pressure and capturing the early game objectives, including the first dragon and Rift Herald. By mid-game, this small lead had disappeared, though, and all the fights C9 took were reasonably even.

After an incredible snipe from HKA’s Wong “Unified” Chun Ki onto Blaber, the team suddenly found a break, and with this advantage, they were able to grab a quick Baron. After this, the Hong Kong team was able to grab a pair of kills in the mid lane, and with it several objectives. But eventually, C9 pulled off a ludicrous team fight, clean acing their opponents, and finishing up their Worlds 2019 run with a victory. For HKA, this was a sad end to their run, stuck in a group with two of the best teams from the LEC and LCK.

For what was expected to be the final game of the day, Griffin fought for a chance to meet G2 in the final tiebreaker and escape group A with the first seed. And as bans began, Griffin took away the Elise, Syndra, and Leona, attempting to neuter the crowd control of G2. The LEC champions countered with many tank bans, and a Yuumi ban to ensure the cat wouldn’t be a factor in their final game. They also locked in some powerful scaling champions, including Yasuo, Ryze and Kayle. Griffin countered with a Qiyana, Akali and gifting Sword his Jayce.

Starting off the game, G2’s early game was focused on slowing down the rapid pace of Griffin’s play style. By following around Tarzan, Jankos was able to limit his opponent’s effect, but at the same time, limited the advantage his Lee Sin pick created. The game effectively stalled until both teams reached level 6. And as the first ults came out, it was Griffin who came out on top, dominating G2 after a questionable teleport play.

From here, it was a snowball, with the raw power of Qiyana and Kai’sa accelerating Griffin to a considerable lead and eventually a Baron. G2 just couldn’t get a handle on things, giving up kills and losing fights across the map, eventually losing the game and sending us to a tiebreaker.

With everything on the line, G2 now faced Griffin in the match that would decide once and for all who was the best team in group A. G2 had side selection, meaning they’d be able to get draft advantage, and keep their final pick a secret until the last moment. And G2 opted not to ban the Qiyana which dominated them last time, instead picking it up for themselves. Griffin picked up an incredibly tanky comp, with Ornn, Galio, and Lee Sin, who G2, ever picking off-meta, locked in the Zoe for the bot lane.

Starting off the game, G2 pushed in heavily, but took plenty of poke from their opponents, making them very vulnerable in all lanes. Eventually, this led to the first blood for Griffin. From there, the power of Griffin’s team became apparent. The Ornn easily dominated the Jayce top. Zoe was incredibly weak bot after falling behind, and in mid, the Galio was just too strong. G2’s best attempts were continuously rebuffed, with the team dying in every fight. Only a brief, perfect engage from Jankos at 21 minutes allowed G2 not to be shut out entirely by the dominating performance of Griffin.

After an incredible day of games, going 4-0 in their matches, and 23-4 in kills during this final game, Griffin top Group A and are the number one seed. They have upset G2 in convincing fashion and head into the playoffs with a lot of momentum.