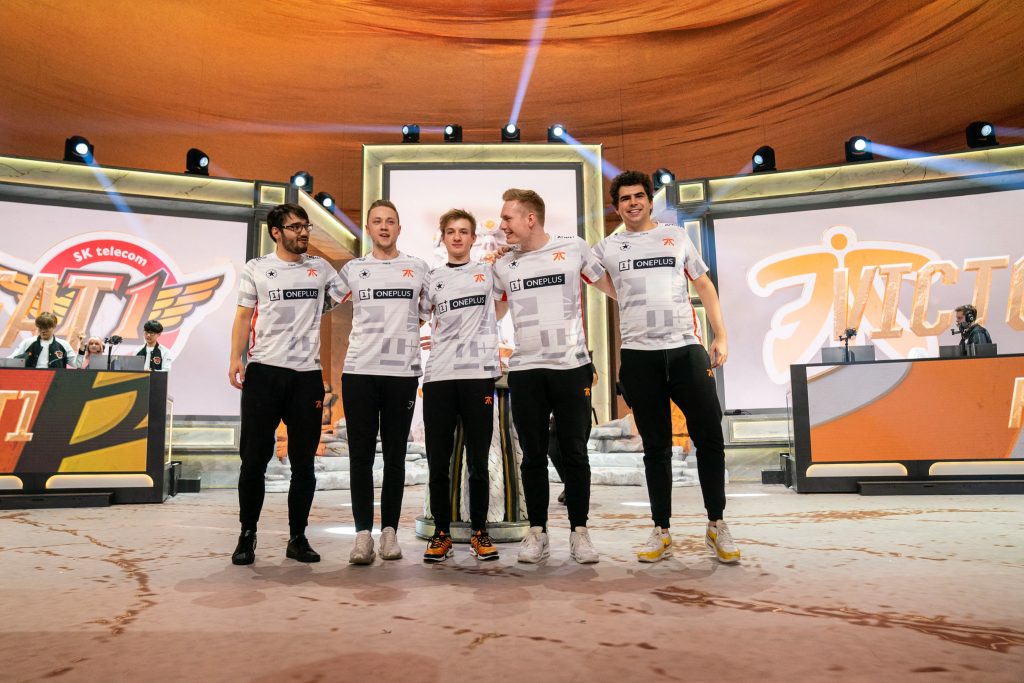 EUphoria is sweeping through the 2019 League of Legends World Championship at the conclusion of day seven. SK Telecom T1 advanced as the first-seed from Group C, but no team has more momentum than Fnatic heading into the quarterfinals. The LEC’s second-seed swept the second round-robin to advance, marking the first time in World Championship history that all three European squads have made it through the Group Stage.

That wasn’t the only history made on this day. With their 1-2 showing, Royal Never Give Up failed to advance past the Group Stage for the first time in team history. Meanwhile, Clutch Gaming’s 0-6 Main Event is the first winless Group Stage for North America in World Championship history.

A fed Kai’Sa took control of the late game, pushing through the wombo-combo team fight damage of the enemy team to put his team on his back for the win. If you watched the game without nameplates, you might think that ADC would be Jian “Uzi” Zi-Hao, the best the world has ever seen. But in this matchup of SK Telecom T1 versus Royal Never Give Up, Park “Teddy” Jin-seong showed why this version of SKT could be their most talented ever, carrying SKT to a win despite their early deficit.

A failed gank on Li “Xiaohu” Yuan-Hao by Kim “Clid” Tae-min gave Hung “Karsa” Hao-Hsuan First Blood on Lee “Faker” Sang-hyeok. A pair of picks onto Kim “Khan” Dong-ha and Lee “Effort” Sang-ho at 22 minutes led to an RNG Baron and RNG used that buff to grow their gold lead to 3.4k.

It looked like RNG had found more picks on SKT around Baron pit at 29 minutes, but RNG couldn’t corral Teddy. He was allowed to free-hit RNG until Clid re-engaged and gave Teddy and opportunity to ult in and shred the team. His clean-up double kill gave SKT the numbers advantage, resulting in a Baron for SKT.

A final team fight at 34:30 saw Khan’s Gangplank chain some barrels together to get a triple kill, but make no mistake that the fight was set up by Teddy. He instantly burst down Karsa on his initial engage, then bought time in the middle of the fight by using Zhonya’s Hourglass. SKT won the team fight five kills to zero and took their second win over RNG in groups.

You knew this game would be interesting as soon as the teams loaded onto the Rift. Both teams came barrelling down bot lane as five-man squads, entering their own bot lane brushes. Fnatic face-checked into a full Clutch Gaming squad but still came out on top with the superior level one, picking up two early kills for a confident start to the game.

Things didn’t get any less interesting from there. The two teams fought and fought and fought, trading kills, team fights, and objectives back and forth. Players took turns getting caught out, owing in part to the great pick potential from both teams in Pyke and Leona, but also in part for showing a willingness to make plays.

The teams were within 1k gold at 47 minutes, tied at 25 kills apiece. Fnatic looked stronger in team fights, securing another Baron and second Elder Drake, but CG had always repelled their pushes. But CG felt desperate as Fnatic once again descended on their base, sending Nam “Lira” Tae-yoo and Tanner “Damonte” Damonte to backdoor the top inhibitor.

It didn’t work. Fnatic instantly pushed forward and took the last remaining CG nexus turret and nexus without a kill on either side. It was a fitting end to a game lacking any discernible strategy or high-level decision-making. Fnatic improved to 2-2 in the group, while Clutch Gaming were eliminated from contention after falling to 0-4.

After scraping by Clutch Gaming in one of the lowest quality games at the tournament, Fnatic regrouped to slaughter an SK Telecom T1 squad that had looked like the best team at Worlds to that point. This is despite SKT getting out to an early three kills to zero lead, proving it was no fluky, cheesy win for Europe’s second seed.

The first positive play for Fnatic came at 10:30. SKT prepared a dive on Tim “Nemesis” Lipovšek, chunking him low and bringing three players mid. Effort’s Alistar chose to flash-Pulverize Mads “Broxah” Brock-Pedersen’s Gragas instead of Nemesis’ Veigar, allowing Nemesis to flash out and put down his Veigar cage. That CC stopped SKT in their tracks, and Gabriël “Bwipo” Rau’s teleport secured two kills on a trapped SKT team.

From that point forward, Fnatic controlled fights and the map. Bwipo fought off a two-man dive top and Nemesis solo killed an overextended Faker in lane. Zdravets “Hylissang” Iliev Galabov found the picks on Leona and Broxah followed up with perfect Gragas casks. Martin “Rekless” Larsson put out the damage and finished 3/0/11 on Xayah.

Fnatic won with ease, finishing up 21 kills to 7 in under 27 minutes. After playing down to their competition in Clutch Gaming, Fnatic played up and over SKT to secure their third win in groups.

Royal Never Give Up > Clutch Gaming

Royal Never Give Up showed just what happens when your bot lane can’t match up to theirs. Uzi and Shi “Ming” Sen-Ming put on an absolute clinic, despite the best efforts of Heo “Huni” Seung-hoon and Lira to keep Clutch Gaming in it.

CG looked good in the early game, picking up First Blood top lane and coming out ahead in the early kill trades. Lira had his best performance of the tournament on one of his low-skill ceiling champions in Rek’Sai, just showing up to lane and working with Huni to pick up kills. CG held a five kills to two lead at 20 minutes — not bad for a team that had not yet won a game at the Main Event.

But despite the kill lead, they were not up in gold. That was courtesy of RNG’s bot lane. Uzi had already grown a 60 CS lead on Cody Sun’s Kai’Sa, while Ming’s lane pressure allowed him to proc his support item much more often than Philippe “Vulcan” Laflamme’s Rakan. CG seemingly never even wanted to team fight RNG around objectives, so RNG secured drake after drake, snowballing their advantage until they also took an uncontested Baron.

With Baron in their pockets, RNG had no trouble closing out CG in team fights. Uzi and Ming combined to finish 8/1/20 in RNG’s 29 minute win.

SK Telecom T1 needed this win to secure first-place in Group C. Clutch Gaming had nothing but pride to play for after their elimination from contention in the tournament. The outcome was never in doubt, as SKT dominated CG in both teams’ final game in the Group Stage.

CG tried to give Huni a matchup he could bully, at least in the early stages, with Kleptomancy Ezreal into Akali. Lira got his comfort pick Skarner, Damonte one of the strongest mid laners in Ryze, and Cody Sun picked up a Heimerdinger that theoretically could throw a traditional ADC off their game, like G2 Esports did to great effect in 2018.

None of that mattered. SKT were the better team throughout the tournament and were easily the better side in this game. Clid was active on Elise, taking advantage of his early pressure over Lira to finish 6/0/5. Teddy was not the least bit concerned about facing a Heimerdinger, going 5/0/9 on Xayah and finishing with a 122 CS lead over Cody Sun. Khan too went deathless, his Akali never threatened by Huni’s Ezreal.

SKT finished the game up 18 kills to 5 in 33 minutes. They advance to the quarterfinals to take on a second-seeded team from another group. Clutch Gaming secured the first 0-6 Group Stage for the LCS in World Championship history.

Fnatic > Royal Never Give Up

Both teams headed into the final game of Group C with 3-2 records. History favored Royal Never Give Up: the LEC had never sent three teams through to the quarterfinals, while RNG had never failed to make it past the Group Stage. Fnatic smashed through that barrier in their most convincing win of the tournament.

Hylissang locked up Ming to kick the fight off, giving Fnatic the first kill of the skirmish. Nemesis and Xiaohu teleported in to make it a 4v4 as RNG traded a kill back on Hylissang. Nemesis ran down Xiaohu and Karsa missed a crucial Lee Sin Q – Sonic Wave to allow Nemesis to survive with a sliver of health and give Fnatic the three kills to one advantage.

By prioritizing and winning fights bot, Fnatic made sure that Uzi could never snowball his way ahead of Rekkles, taking away the only win condition RNG ever draft. With the support of his team, Rekkles finally slew the Uzi demon, outpacing him in CS and never allowing him to get into the game.

Fnatic had the better five-man team, and it showed in this critical game. By holding Uzi down, they rolled to an 11 kills to 3 victory in 32 minutes. Rekkles’ Xayah finished 5/0/4 and 65 CS up on Uzi’s Ezreal to send Europe into a frenzy.

Fnatic advance to the quarterfinals, where they will face a first-place team from a different group.