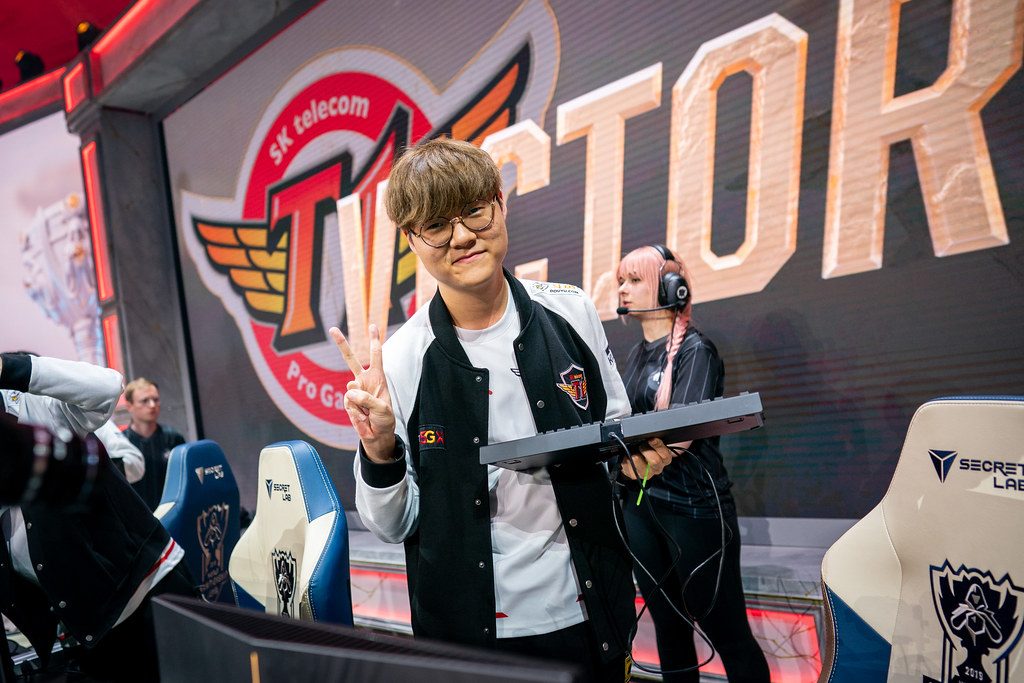 It was a tough day for every underdog, as the tournament’s top teams padded their group stage scores. (Image via Riot Games)

We’re at the end of our first round robin of the Worlds 2019 group stage, and there have been surprises, as favorites have fallen, and underdogs have triumphed. But in our fourth day of games, what we saw was a series of mismatches and quick victories, matches where the giants stepped on the little guy and proved exactly why they were champions in their respective regions.

The first game of the day shouldn’t be a mismatch on paper. Fnatic is a top team in a top region. And yet historically, the team has struggled against this Royal Never Give Up lineup. Fnatic ADC Martin “Rekkles” Larsson himself pointed out he wasn’t confident against RNG in an interview shown before the game. In his career, he’s lost eight out of the nine times he’s faced RNG’s Jian “Uzi” Zi-Hao.

RNG started their draft by continuing to ban Twisted Fate against Tim “Nemesis” Lipovšek, who has not had his signature champion all tournament. The rest of picks and bans went quickly, as both teams seemed to have a clear idea of what they wanted, with Fnatic picking up a dangerous Morgana/Blitzcrank bot lane, and RNG opting for a typical meta set of picks.

But after creating incredible early game pressure with the Blitz, Fnatic was unable to take advantage of their lead. RNG countered with five team members roaming and avoiding the lanes. In fact, both team’s junglers seemed to be the defining forces for their teams because of the movement throughout this game. After several fights for objectives, RNG launched an incredible realm warp, sending Xie “Langx” Zhen-Ying on Mega Gnar into the backline of Fnatic. This split the EU team, killing three of them and led to an easy Baron take for RNG. Pushed on the back foot, Fnatic attempted a last-ditch Baron take when Nashor had respawned, but in the ensuing fight, Uzi showed Rekkles was right to be unconfident, demolishing Fnatic, and improving his record against his fellow ADC to 9-1.

In the most significant mismatch of the day, NA’s Clutch Gaming took on SK Telecom T1, in what was expected to be, and eventually, an utter stomp. With Clutch banning out some danger picks like the Morg and Renekton, SKT picked up a hugely impactful team, of first pick Yasuo, Akali, Gragas, Lee Sin, and Aatrox, with the Yasou ultimately going into the bot lane. Clutch stuck to their own comp, a robust set of meta champs, and avoided counter picks, which ultimately wouldn’t help them.

SKT started the game by three buffing their opponents, stealing away Nam “Lira” Tae-yoo’s blue buff. Then five minutes in, SKT collapsed on the bot lane, scoring a pair of kills for Lee “Faker” Sang-hyeok, who was set to dominate on his Akali. At 10 minutes, Clutch attempted their patented forced rift herald take. But SKT was waiting for them, securing four kills, and eventually, an ace.

Then things got ugly. Faker bullied ex-teammate Heo “Huni” Seung-hoonout of the top lane, even flashing to secure a kill on him, in what had to have been a deliberate call out. From there, SKT could grab anything they wanted, killing Clutch in their jungle, and taking objectives unimpeded. Pushing side lanes alone, Faker was even caught out by four opponents, only for the legendary Mid player to easily escape, while his team secured Baron. Mercifully, at 26 minutes, SKT pushed into Clutch’s base and finished the game.

Faker escapes the 1v4 and @T1LoL get the Baron! #Worlds2019 pic.twitter.com/W1LpSAwO9F

In the third game of the day at Worlds 2019, FunPlus Phoenix faced off against GAM Esports, in a matchup between a pair of teams which were surprisingly on the same score heading into the game. FPX had been expected to be the runaway victors of Group B, but now found themselves struggling in the middle of the pack. And yet the team didn’t get the memo that they were meant to be underperforming in this one-sided stomp.

After a short delay to the start of the game, FPX shot to an early lead with incredibly ganks across the map from Tian. The LPL jungle star made a trip bot for first blood, before securing a 2v2 top and setting off FPX’s snowball victory. GAM never looked comfortable, and with their poke comp falling apart, and they were reduced to fighting a retreating battle as their lanes collapsed. The main problem stemmed from the comparative drafts. FPX’s dangerous assassin composition could jump on the poke-based carries, such as Jayce, before GAM could react. As a result, in the fastest game of Worlds 2019 so far, FunPlus Phoenix defeated GAM in a return to form for the LPL champion.

A baron steal for Tian and the ace for @FPX_Esports!!! #Worlds2019 pic.twitter.com/C9lydniw2w

Heading into this game, it would have been safe to assume that Splyce would have a competitive showing versus J Team. Both teams have had good games against seemingly superior opponents. And in picks and bans, it seemed like the LEC squad could perform well, picking up a strong global comp, with the Karthus-Sion combo.

Splyce started their match by trying to catch JT off guard, by lane swapping their duo lane to top, with the added effect of bolstering their Karthus’ early game farm. But the team mistepped, as a questionable dive gave up first blood to JT. Settling into a farming mid-game, Splyce started to attempt to use the leverage of compositions global pressure and mobility. However, JT consistently outplayed Splyce in the early laning phase, engaging with its Nautilus and Gragas hard crowd-control combo. By the 20-minute mark, it was looking desperate for Splyce, as the team’s game plan had all but dissolved. Yet thanks to their map-wide pressure, they did have a small tower advantage.

However, faced with the team fighting prowess of J Team, Splyce was just unable to get anything going, eventually found themselves caught out and killed, with JT able to follow up for a Baron. From there, with four dragons, a baron, and vision in their favor, JT pushed in on Splyce. Following a second Baron, J Team slowed down the entire pace of the game. Unwilling to risk giving up their victory, the squad cautiously attempted to end the match, and finally, after 45 minutes, they secured a one-sided win.

With Griffin wracked with turmoil amid the controversy with their recently departed coach, Cloud 9 had a great chance to pick up a win against one of Korea’s top teams. C9 also opted to stick with Robert “Blaber” Huang, after benching jungler Dennis “Svenskeren” Johnsen yesterday, in a losing effort against G2. In the draft, the teams opted for a pair of incredibly safe bot lanes, with the Garen/Yuumi combo for Griffin, which has been so disruptive so far in the tournament, facing off against C9’s Sona/Tahm lane.

With this, the game was slowed down to a glacial pace for the early game, as junglers couldn’t take advantage of the pair of extra secure duo lanes. In an attempt to force something, Blaber gave up a couple of trade kills on his Elise, but neither team felt confident enough to secure objectives off the plays. Eventually, after poking down Griffin, C9 secured the dragon and the game’s first real advantage.

Thanks to this, C9 began to grab objectives across the map, picking up towers, another dragon, and eventually Baron. But even with all these boons, C9 were far weaker in the 5v5 fights, and when they attempted to group up, Griffin were able to beat their opponents in a straight fight. Suddenly C9’s advantage was crumbling, and Griffin easily won engagement after engagement against the NA team. The raw damage of the Yuumi/LeBlanc and GP combo was just too much, and the Garen and Lee Sin were reliably able to peel off C9’s short-range champions. And ultimately, this was the NA team’s downfall. Griffin fought C9 in their base, and after a close fight, secured the victory.

G2 Esports are a favorite to go all the way at Worlds 2019, but their occasional missteps provided hope for their opponents, Hong Kong Attitude, ahead of their matchup. Facing perhaps their easiest in-group opponent G2 opted to ban typical power picks, including Pantheon, Qiyana, and Kayle, while HKA took away the Kayle and Trist, some of G2’s flex picks. G2 then opted for a very similar comp to the one SKT had drafted earlier in the day, perhaps a shoutout to their potential knockout stage opponents, although they also grabbed the Syndra, one of the strongest mages available. Meanwhile, HKA had a more benign comp, picking up the Thresh, Xayah for the bot lane, Orianna for Mid, and Gragas/GP for Jungle/Top.

In game, G2 quickly grabbed the first blood with an early gank mid and rapidly followed up in bot, to send Rasmus “Caps” Borregaard Winthe ahead 3/0 on Syndra. But G2 seemed to get cocky, and overextending in a series of plays, found the score at 3-2 in their favor by three minutes. But perhaps hungry to prove their worth, after the rapid performances of FPX and SKT, G2 raced to try and secure as many kills and advantages as possible.

HKA desperately tried to slow down the game, while starting to take advantage of G2’s slightly sloppy play. And largely, they succeeded, rapidly scaling up, grabbing kills, and turning a one kill disadvantage into an 8-3 lead. G2’s only saving grace was their objective control. As they managed to secure towers, the LEC champions were able to stay equal with HKA. And as G2 renewed their discipline, HKA’s lead started to slip. After a miracle Baron play from G2, the ensuing fight caused a complete breakdown in HKA, who’s lead collapsed. Finally, the EU team was able to secure their win after a messy and imperfect performance.

Make sure to follow Hotspawn throughout the League of Legends Worlds 2019 for continued coverage of the Group Stage and Play-offs.