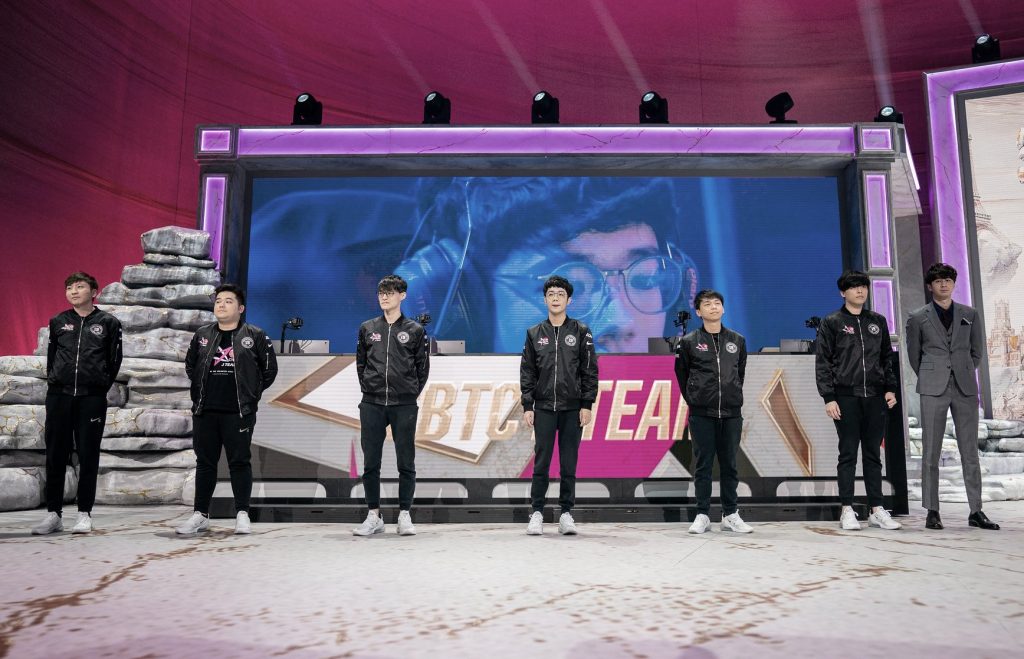 CTBC J TEAM were one of the two teams eliminated from Worlds 2019 during the Group Stage today. (Image via Riot)

It took a tiebreaker game, but Group B has concluded here on day five of the 2019 League of Legends World Championship. FunPlus Phoenix bounced back from a loss to Splyce early in the day to advance in first place from the Group Stage. Splyce advanced in second place after sweeping the second half of their round-robin in impressive fashion. GAM Esports and J Team are the first teams sent home from the Main Event.

GAM Esports took a small 200 gold lead at ten minutes after a successful dive top lane, but the rest of this game was dominated by the LPL Summer champions. GAM went back to their now signature Kled and Nocturne dive picks, but FPX were able to read and react to GAM’s plays to build up a large CS lead for Lin “Lwx” Wei-Xiang’s Kai’Sa and trade back kills on the initial plays.

Sensing the game slipping away from them, GAM pulled the trigger on a five-man engage at 23 minutes in the Baron river. FPX instantly deleted Nguyễn “Slay” Ngọc Hùng’s Shen to give them priority on Baron. FPX used that advantage to start and then pull off Baron, securing four kills on the GAM squad that didn’t want to give away the objective without a fight.

A failed pick on Liu “Crisp” Qing-Song at 26 minutes spelled the end for GAM. Crisp lived, four members of GAM died, and FPX capitalized by taking an uncontested Baron. FPX closed it out minutes later, winning the opener of day five 20 kills to 6 in 28 minutes.

Humanoid had a bounce-back game after a rough week one, picking Cassiopeia with confidence and backing it up with his play. He kited the winning team fight extremely well, picking up a triple kill at 28 minutes to secure the win for Splyce. He finished the game 7/2/3, never allowing Chu “FoFo” Chun-Lan’s Kayle to get going.

The win for Splyce evened the head-to-head between themselves and J Team in the Group Stage. Both Xerxe and Kasper “Kobbe” Kobberup finished the game deathless at 2/0/8 on Gragas and 3/0/5 on Kai’Sa.

GAM Esports needed to win this game to avoid being the first team eliminated at the World Championship. Rest’s Renekton made sure that didn’t happen. He turned around a 1v2 and a 1v3 for a kill without dying, absolutely destroying the GAM plan to get Phạm “Zeros” Minh Lộc ahead on Akali.

Meanwhile, Chen “Hana” Chih-Hao’s Gragas and J Team were controlling the rest of the map. Hana secured the opening infernal drake and provided FoFo the tools to scale up on Azir without issue.

GAM picked up a pair of kills on FoFo and Hana at 23 minutes, giving them a sliver of hope despite a continued gold deficit. They used that opportunity to start Baron, hoping their five-man group could hold off the three JT players. Unfortunately, FoFo respawned in time to teleport in behind GAM, and JT were able to wipe GAM off the map and steal Baron.

JT used that Baron to push down GAM’s base and end their dreams of advancing to the quarterfinals. Rest’s Renekton stood in front of GAM’s fountain, taunting them over and over to remind them of his dominance. Rest finished the game 5/2/4.

With this loss, @GAM_eSportsVN are eliminated from #Worlds2019 Knockout contention. pic.twitter.com/q6lOnquDqe

After throwing away a chance of knocking down China’s top team in week one, Splyce were having none of it here on elimination day. Xerxe started the game off by visiting top lane to gift Vizicsacsi First Blood, starting a chain reaction that led to an incredibly fed Cho’Gath.

FunPlus Phoenix tried to counter Splyce’s engage in the bot lane at 16 minutes, but Humanoid had poked down Kim “Doinb” Tae-sang’s Galio in the mid lane, and Kim “GimGoon” Han-saem opted not to teleport down. That left Splyce with the numbers advantage, allowing them to take a four-kills-to-one team fight win, adding two more kills to Cho’s plate.

FPX then repeatedly tried to pick off that Cho’Gath, but a Gargoyle Stoneplate Cho is not one who goes down easily. Kobbe’s Xayah was allowed to free-fire and Humanoid’s Akali never had to fear CC as Cho’Gath soaked the attention of FPX. It may have taken years for him to get here, but Vizicsacsi left his mark on his first World’s appearance.

Splyce closed the game out in 34 minutes, securing themselves at least a chance at a tiebreaker to advance. Vizicsacsi finished 7/1/7 on Cho’Gath, while Doinb had his worst game so far at Worlds, finishing 0/5/6 on Galio.

With at least a share of second place secured, Splyce looked for more against the already eliminated GAM Esports. Things didn’t go as planned in the early game, as GAM continued to play aggressively. Đỗ “Levi” Duy Khánh’s Lee Sin was active immediately, securing First Blood for GAM bot lane and then repeatedly diving Vizicsacsi’s Gangplank with Zeros’ Fiora to give her a big lead.

GAM held a 4k+ gold lead and had two infernal drakes and a mountain drake at 24 minutes when disaster struck. They committed to Baron thinking Splyce had no vision, but a well-placed Splyce ward was just out of sight of GAM’s control ward. Splyce collapsed as five and wiped GAM, taking Baron and their first gold lead of the game.

No longer advantaged in the side lane, GAM fell apart as Splyce were able to force at will. The LEC third-seed won the game 20 kills to 13 in 33 minutes to secure their spot in the quarterfinals.

In the final non-tiebreaker game of Group B, the number one seed of either the LPL or LMS would advance, while the other would be eliminated. FunPlus Phoenix made sure they were on the right side of history, winning in perhaps the most dominant game of the World Championship so far.

FPX assembled a dream top half of the map trio in Renekton, Elise, and Ryze in champion select and showed they knew how to use them, rotating around the map at will to punish JT. Gao “Tian” Tian-Liang used his Elise pressure immediately, propelling FPX to an insurmountable 7.2k by 15 minutes.

FPX never lost a skirmish, needing only 23 minutes to crush JT 20 kills to 3 and secure their spot in the quarterfinals and eliminate JT from the competition. A rematch with Splyce awaited to determine which team would advance in first-place.

Heard that we were the first team to beat a EU team in tiebreaker at Worlds, and also created the largest gold difference in a game since 2015. It feels nice to make some history! 🥰🥰🥰 #Worlds2019 #FPX https://t.co/LfRUL50SQZ

Splyce took Doinb out of the game in their first meeting of the day, but FunPlus Phoenix weren’t going to let that happen again. Tian’s Gragas visited mid lane often in the early, punishing Humanoid’s positioning on Syndra and snowballing Doinb’s Renekton to a 2/0/2 score and 2k gold lead at 10 minutes.

FPX started Baron at 25 minutes after picking off Humanoid. Splyce tried to force FPX off, but FPX killed Xerxe’s Elise and then felt comfortable burning the objective down. Splyce picked up a kill in their contest attempt, but FPX got Baron and got four members out alive.

Splyce held on in the mid-game, using their wave clear and the threat of Gangplank’s ultimate to dissuade FPX from diving them. However, FPX finally found an opening at 38 minutes. After forcing Splyce off a sneaky Baron attempt, FPX took mid lane priority and rotated to Elder Drake for an uncontested objective take. Then, FPX reset and rushed Baron immediately, forcing Splyce to react. FPX turned off Baron with no hesitation, wiping Splyce to secure the game and first place in Group B. Doinb finished the tiebreaker 9/2/5.

FPX will play a second-place team from another group in the quarterfinals, while Splyce will face a first-place team.