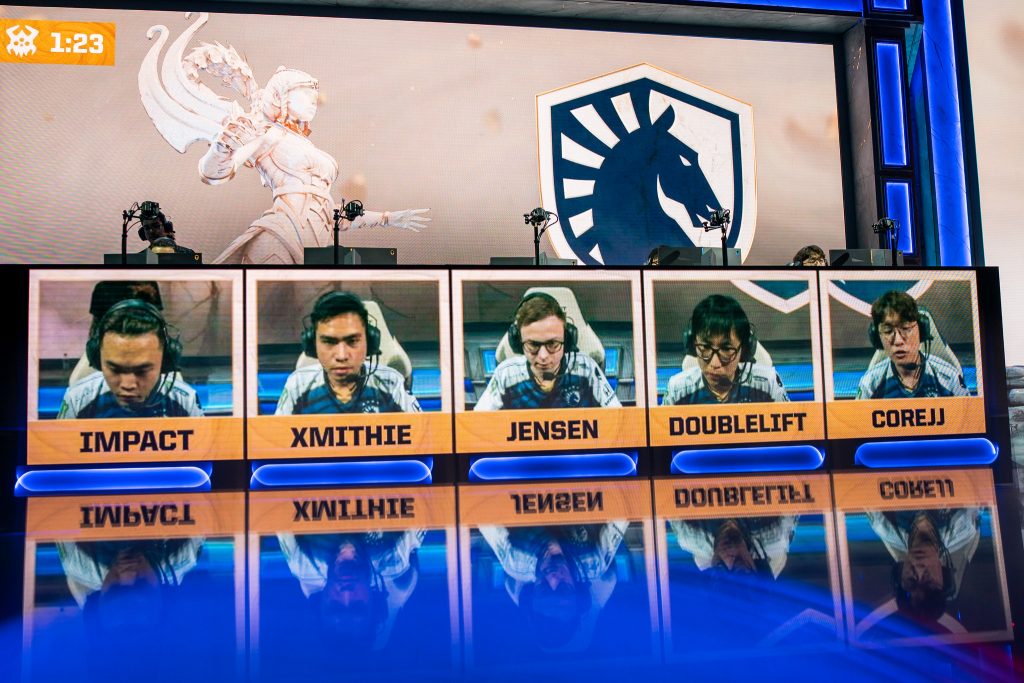 The eighth and final day of the 2019 League of Legends World Championship Group Stage is over. DAMWON Gaming swept the second-half of the double round robin to advance in first-place, becoming the third LCK team to advance in first. Invictus Gaming avenged their 2019 Mid-Season Invitational loss to Team Liquid to also advance to the quarterfinals.

Meanwhile, Team Liquid become the third straight LCS team to fail to make it past the Group Stage, and AHQ became the third team to exit 0-6 at this World Championship.

AHQ got off to the fast start they needed if they were going to challenge Invictus Gaming. Chen “Alex” Yu-Ming visited mid lane early, combining with Kim “Rainbow” Soo-gi to take down Song “Rookie” Eui-jin’s Orianna for First Blood. AHQ used some of their early pressure to pick up the first two drakes of the game, remaining competitive with the 2018 World Champions.

iG responded by having Gao “Ning” Zhen-Ning, their World Champion jungler who started his first game of this tournament, camp for Kang “TheShy” Seung-lok’s Jayce in top lane. That came at the expense of Chen “Ziv” Yi’s Gangplank, who was already at a disadvantage in the matchup. Ning’s Olaf was excellent at being a meatball to soak damage for TheShy and Rookie, allowing them to dish out the damage for iG.

The result was that AHQ never quite got their team fight online. The early skirmish power of Jayce, Olaf, and Xayah closed it out too quickly before the Gangplank, Viktor, and Kai’Sa could outscale iG. Ning had a good debut, finishing 4/2/3 in the 33-minute win. iG conceded only two turrets and doubled AHQ’s kills, leading 10 to 5.

By dropping to 0-4 with the loss, AHQ were eliminated from tournament contention.

After an opening-round victory over DAMWON Gaming, their second meeting was an instant disaster for Team Liquid. TL forced mountain drake at 5:30, expecting to have priority with Jang “Nuguri” Ha-gwon’s underleveled Kayle top lane. But DWG collapsed, Yilliang “Doublelift” Peng got chain-CC’d in the dragon pit, and Kim “Canyon” Geon-bu smited the drake away from Jake “Xmithie” Puchero. Jung “Impact” Eon-yeong teleported in, but the damage was already done. DWG picked up the drake, four kills, and an instant lead.

DWG took a 3k gold lead into an infernal drake fight at 17 minutes. TL saw no way forward but to fight for it, given the ticking time bomb that is Kayle on DWG’s side. Xmithie got a Lee Sin Q – Sonic Wave onto drake but missed the smite, allowing Canyon to again secure the objective. Impact was left out to dry in the team fight and DWG once again took a huge advantage from a drake fight.

DWG won the early and mid games with a composition that outscaled TL, meaning that the closeout was a mere formality. DWG secured Baron, their second infernal drake, and took double inhibitors at 29 minutes. The final team fight was closed out at 31:30, a clean 5v5 fight highlighted by a multi-man Yasuo R – Last Breath by Sin “Nuclear” Jeong-hyeon. DWG led 12 kills to 4 in the 32 minute game.

Two games, two disasters in the bot river early for Team Liquid. Both bot lanes joined their junglers to fight over the Rift Scuttle, but TL’s bot lane got split from Xmithie’s Gragas and Alex instantly flashed on Doublelift. TL were able to flash the dragon pit wall, but Rainbow’s Lissandra took her mid lane priority to roam down. With her huge catch potential, AHQ managed to chase down Doublelift and Jo “CoreJJ” Yong-in for the first two kills of the game.

AHQ tried to build on that momentum by bringing Rainbow and Alex bot for a dive, but Xmithie was ready. TL turned the fight around, picking up four kills for one as Jensen cleaned up the leftovers for a sudden 1k gold lead.

AHQ continued to be proactive, knowing that their composition needed to wrestle an advantage back before the game went too late. Alex and Wang “Ysera” Tsung-Chih tried to find a pick onto Doublelift at 27 minutes, but Doublelift had his Xayah R – Featherstorm and Quicksilver Sash ready to avoid death. The rest of TL collapsed and routed AHQ, picking up four kills for zero and a free Baron.

TL closed it out minutes later, taking a 12-kills-to-6 victory in 31 minutes to keep their hopes for advancement alive. Nicolaj “Jensen” Jensen’s Leblanc finished 5/0/3 in the win.

DAMWON Gaming and Invictus Gaming both sat at 3-1 heading into this game, looking to take control of Group D. iG started off hot, gifting TheShy a kill on Nurguri’s Jayce before minions spawned. TheShy rewarded iG by solo killing Nuguri in one of the most explosive top lane matchups we’ve seen so far.

Showmaker countered at 9 minutes, roaming up as iG’s top half of the map attempted another dive on Nuguri. iG expended a lot of resources on the initial dive, with Ning taking in a suicide Rek’Sai ultimate to finish Canyon’s Lee Sin off. Showmaker’s Akali arrived just in time to clean up, using his ultimate to close the gap on TheShy. Showmaker than casually ran down Rookie’s Orianna to pick up an early triple kill.

DWG knew they needed to shut down TheShy in the side lane, so they sent three bot to kill him at 27 minutes. With that pick up, DWG headed straight to Baron. iG forced them off before DWG could finish it and picked up a kill on Cho “BeryL” Geon-hee. With TheShy teleporting back in, iG then tried to melt down Baron. Canyon and Nuclear re-engaged and Canyon’s Lee Sin once again won a smite fight, securing the Baron steal for DWG. Nuclear outplayed Ning and TheShy in the back half of the fight, securing an ace for DWG in one of the most chaotic fights of the tournament.

DWG caught out TheShy at 31:30 and wiped out the entire iG team five kills to zero to secure the final push and win. Showmaker finished with another deathless game, this time going 6/0/6. DWG now only needed to beat the winless AHQ to advance first out of the group.

DAMWON Gaming took care of business in their final game of the Group Stage, defeating AHQ to take first-place in Group D. The LCK’s third-seed has completed the run from the Play-in Stage to top of their Main Event group, dropping only a close game to Team Liquid in their six matches.

DWG asserted their dominance early. Nuguri’s Renekton flashed onto Ziv’s Sion to secure the stun and was followed up by the W – Seismic Shove from Canyon’s Taliyah. A couple more dives on Sion and DWG transitioned their early power to pick up the first eight kills of the game and Baron at 22 minutes.

After that it was just a matter of closing it out. It took a little bit, but DWG found their fight at 29 minutes. Canyon split off AHQ with a nice R – Weaver’s Wall and DWG cleanly executed to finish off the Group Stage at 5-1.

Rookie had a rough Summer Season after taking a break for family issues, but he showed why he was the most feared player in 2018. His Qiyana solo killed Jensen’s Leblanc for First Blood, turning around the matchup that Jensen picked into. Rookie then recalled to buy Mobility Boots, instantly roaming top to pick up a kill on Impact’s Aatrox, naturally pushing into TheShy’s Vladimir.

TL fought back with a 2v2 kill in bot lane, but Jensen handed it back by getting caught out next to wall by Rookie. iG controlled the solo lanes in the early going, but TL had the stronger play bot lane and used it to secure the first two drakes of the game. Unfortunately for TL, they were only cloud and ocean.

Once it got to the mid game, it was clear that iG were the better side. With an early lead, iG had the perfect composition to dive at will, using Rookie to secure the flanks while Vladimir, Gragas, and Alistar had the health to dive. iG took everything they wanted, steamrolling TL on tower dives repeatedly to win 18 kills to 4 in 24 minutes.

In the end, Team Liquid had the counterpick on both solo lanes and got stomped in both lanes. Their players did not match up individually to the 2018 World Champions.

With their win, Invictus Gaming avenged their MSI defeat and advanced to the quarterfinals. Meanwhile, Doublelift again failed to make it out of groups with a fourth consecutive 3-3 Group Stage record. No LCS team will advance past the Group Stage.