Winner and Losers from ESL One Germany Groups 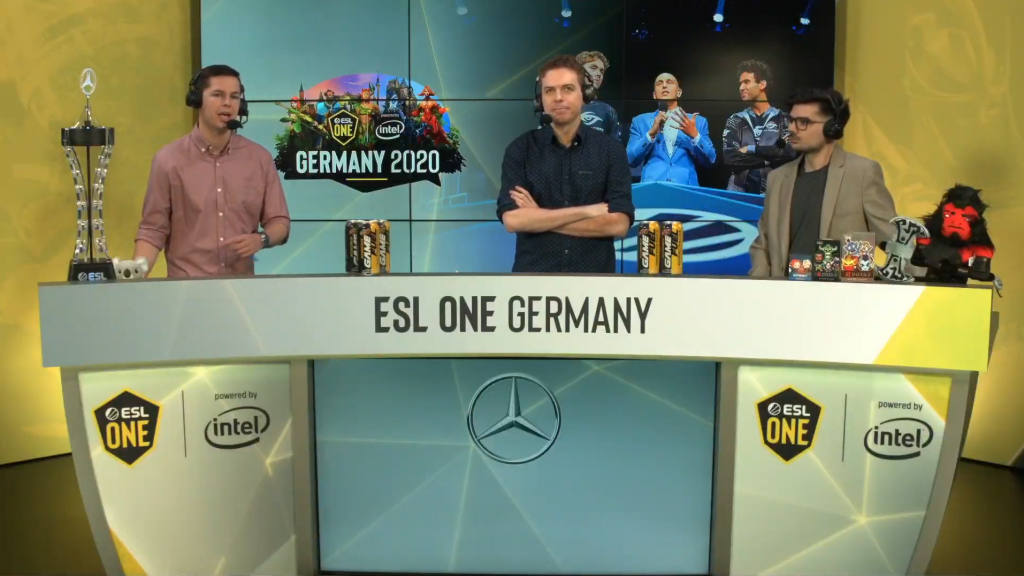 Despite the unique - and quicker - Swiss-system, ESL One Germany's group stage still came down to the last day. (Photo courtesy ESL)

The group stage of ESL One Germany wrapped up on October 20th, eliminating eight of the 16 teams. Who’s on top heading into the playoffs? Unsurprisingly Team Secret, with Alliance, Team Liquid, and OG not far behind.

That's a wrap for the #ESLOne Germany 2020 Online Group Stage!

We now have our 8 qualified teams, and we'll be joining them for the Playoffs on the 23rd!

However, the unique modified Swiss-system tournament format which ESL One Germany has adopted led to some interesting situations. The fact that teams never play an opponent twice, and advance or are eliminated after three wins or losses means a quicker overall stage and a better viewing experience. It also leads to some great stories early on – such as Team Nigma desperately battling for survival after two upset losses. But the biggest story comes not from Nigma but one of the squads that defeated them.

Yellow Submarine is a CIS organization that hasn’t made a significant splash in Dota 2 since TI5 open qualifiers. But they shot to prominence at ESL One Germany with a surprise defeat of Team Nigma. After a thorough beating by Team Secret, the team bounced back to deal another surprise upset, this time to Ninjas in Pyjamas. This was a much closer affair than the Nigma stomp but was still a decisive defeat.

By round four of the playoffs, there was no more taking this team lightly. OG didn’t even risk letting Yellow Submarine get a foothold, bringing an almost uncharacteristically cautious style to their draft. They handed Yellow Submarine their second loss and put them in a battle for survival.

With their ESL One tournament on the line, Yellow Submarine found themselves facing one of the most storied teams in their region’s history in Natus Vincere. The former FlyToMoon stack had performed admirably in the tournament so far but had struggled against top competition. In their best showing, a losing effort versus Team Liquid showed their issues. Given an ideal draft, Na’Vi could beat anyone, but very rarely would a top team make that kind of mistake.

Yellow Submarine had already proved they had the aptitude to draft well, as they beat Team Nigma and NiP with some deadly compositions. Luckily enough, in game one of the decider, Na’Vi drafted disastrously. With no way to shut down Yellow Submarine’s carries, Na’Vi was handed a quick defeat. For the second match, Yellow Submarine funneled gold into Yatoro’s Templar Assassin, with the Yaroslav “Miposhka” Naidenov Bane surviving on a full consumable diet for most of the first 10 minutes.

However, overextensions by Yellow Submarine were punished far better by Na’Vi than in the first game. Vladimir “RodjER” Nikogosyan looked far more comfortable on his Earth Spirit, pulling off some critical engagements that swung the match. With match point on the line, Na’Vi once again went back to comfort picks to secure the win. In a performance that would have made Admiralbulldog proud, Bogdan “Iceberg” Vasilenko punished every move Yellow Submarine made.

During the media day, @TonyaPredko has interviewed @rodjerdota. They talked about @FTM_dota, bootcamp goals, and the atmosphere in the team!

With the loss, Yellow Submarine was eliminated, their upset-filled run through ESL One groups ended, and relegating them to the ranks of Sgt. Pepper’s Lonely Hearts Club Band. Na’Vi, on the other hand, moves on the ESL One Germany playoffs, continuing their own rise in prominence.

Quick Eliminations and the Usual Suspects

Apart from the notable exceptions of Yellow Submarine and mud golems, it was a shame to see the majority of the closed qualifier teams fall in the group stage. Tempo Esports, the young Serbian organization, has some pedigree on its roster, notably with former B8 and FlyToMoon support Nikola “LeBronDota” Popović. However, the squad wasn’t able to engineer a winning record and dropped out of the tournament at the earliest possible point.

Joining them were fellow close qualifier team Extremum, who were sadly the first team eliminated on October 13th. The CIS stack has made a point of consistently qualifying for Tier 2 tournaments as of late but hasn’t quite taken the next step up towards winning games regularly once they get there. Win one win apiece, Cyber Legacy, HellRaisers, and Winstrike Team all teased an improvement in quality. However, instead they would play the role of spoiler for the middle of the pack teams such as Vikin.gg and Ninjas in Pyjamas.

On the complete opposite side of the bracket, there were some familiar faces practically speedrunning the group stage. Team Secret, of course, won three matches in a row to instantly qualify, without losing a game. While the level of their competition for the first few days was slightly questionable, it was still an impressive feat.

Four kills and the Aegis going our way 🔥

Alliance, possibly the second-best team in Europe right now, also managed a trio of wins. Their defeats of a tough NiP side and an even more troublesome OG roster (who also qualified with only a single loss) were incredibly impressive.

The mudgolems, a stack formed around the leadership of Alliance’s former support Neta “33” Shapira, has been just as impressive here as during their near undefeated run at BTS Pro Series Season 3: Europe/CIS. Considering this roster has had the chance to pick and choose the best parts of Chicken Fighters, CR4ZY, and Aggressive mode – some of the best tier two teams in recent memory – it’s no surprise they’re successful. But upsets, over both Natus Vincer and Team Nigma were not expected. The team qualified for the playoffs and will be a dangerous opponent for anyone to face.

Team Liquid was the final quick qualifier, who after falling to beat Team Secret (A stack they’ve not been able to beat all year), defeated 5men to secure their playoff spot. Team Liquid historically does better when it can avoid a long-drawn-out lower bracket run, so will have to up their game significantly if they want to hang on to their playoff spot.

Vikin.gg and Ninjas in Pyjamas are typically middle of the pack teams, and once again lived up to that by ending up battling it out on the final day. After a text-book shellacking on Spectre by NiP’s Charlie “CharlieDota” Arat, Vikin.gg looked to strike back with Miroslav “BOOM” Bičan Storm Spirit. The midlaner put on an all-star performance from BOOM roaming across the map, equalized the matchup. Even some incredible RNG from Charlie couldn’t prevent a match-point situation.

.@charliedota has been praying to RNGesus ⚔🩸

Finally, in a paused-filled final matchup, Vikin.gg broke out the Invoker pick for BOOM, putting the win firmly on his shoulders once again. Despite this, it was the side lanes where the majority of the early game action was focused, with NiP trying to use the Broodmother’s hyper-mobility to punish the Vikings. But after repeated bad fights in the jungle, the initially strong NiP found themselves on the back foot, while Vikin.gg sat on a fed Sven.

This Symphony of Kites ends in a beautiful teamwipe for us 🤩

A crucial error that saw Vikin.gg leave behind the Aegis and cheese in the Roshan Pit threatened to end the matchup, but a disastrous team fight that followed kept Vikin.gg alive. With Sven still scaling, while NiP started to peak, there was a hard time-limit on the match as the realm of 60-minute items was fast approaching. Sure enough, at over the hour mark, both teams were able to farm up and grab the Tier 5 jungle items. NiP even got one the perfect item for the Drow in Ballista, and one wrong move would end the game – and it was NiP who would make it. A misstep bot lane cost three vital buybacks, and Vikin.gg advanced while NiP were eliminated.

But the most shocking performance of the tournament came from Team Nigma. Despite playing without team captain Kuro “KuroKy” Salehi Takhasom, with coach Roman “rmN-” Paley stepping up to take his place, expectations were still high for the squad. After being upset by Yellow Submarine in a shock loss, the team were reeling. A convincing win over Tempo Esports sadly led to even more upsets as the mudgolem’s handed the team another loss. With a single loss away from elimination, the team clutched out a win versus Winstrike Team to take themselves into the final day.

There they met 5men, a similarly struggling stack. The team, still a fusion of the former Cloud9 and OG.Seed rosters. Game one, the unthinkable happened, as Nigma once again appeared to completely lose control as headline writers, like myself, prepared to abandon faith in the struggling squad.

But after a bizarre matchup in game two, things appeared to stabilize. Both teams – but particularly 5men – played a very poor game, culminating in a strange play. As 5men rushed to avoid a fight after securing their object, the team left behind the Aegis in the Roshan pit, just as Vikin.gg did earlier. This move, usually reserved for low MMR pub games, was typical of the kind of mental errors both teams made in this game, and ultimately it was Nigma who were able to clear the cobwebs quicker and take home the win.

Hey guys we think you forgot something? You gotta pick up the aegis too you know 🤪

In the final ESL One Germany group game, 5men threw everything away in a series of bad team fights. A bizarre fight to try and save Rasmus Johan “Chessie” Blomdin as Marcus “Ace” Hoelgaard dived in with his Spectre only to quickly die, lose aegis, and die again. One more big, disastrous fight, and it was very much over for 5men. A trio of sloppy games from both teams, that teased an elimination huge upset elimination for Nigma.

The Swiss-style tournament system injected a jolt of energy into ESL One Germany, hopefully inciting more tournaments to use the system. However, despite the new group stage format, the event felt stacked in favor of the big-name teams. On paper, it feels like Team Secret, OG, and Nigma were handed relatively soft-ball opponents, especially in the early rounds. Even if Nigma failed miserably in two of what should have been three pushover wins for them, the deck looked stacked against the likes of Cyber Legacy, HellRaisers, Winstrike Team, and Extremum.

ESL One Germany continues on Friday, October 23rd. You can catch all the playoff action on ESL’s official Dota 2 Twitch stream.