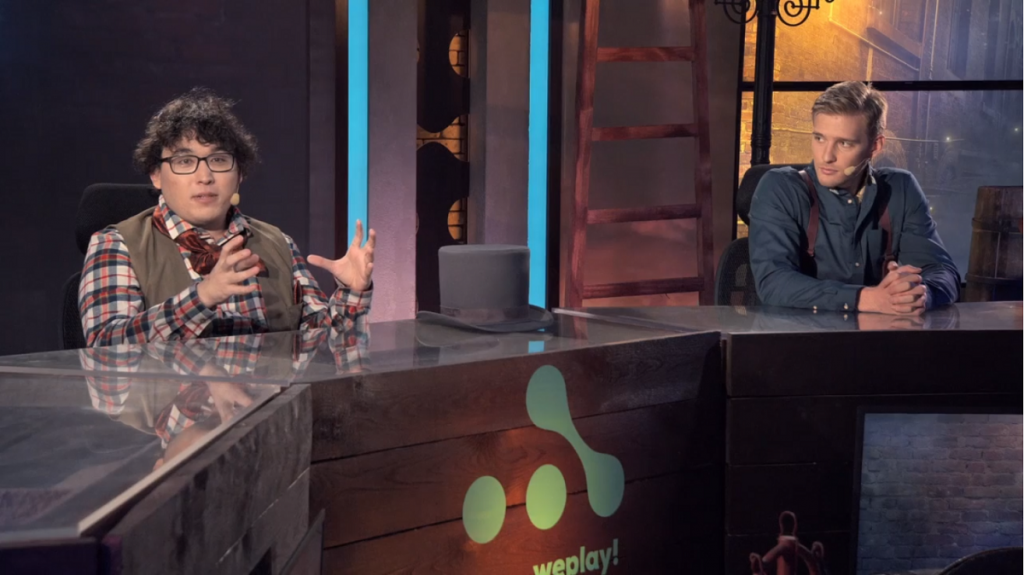 Swim and Panda talking about the patch notes on day two of the WePlay! Dota Underlords Open. (Image screencapped from WePlayEsport_EN on Twitch.tv)

Valve has a keen sense of timing! Just as the first day of the WePlay! Dota Underlords Open closed, a new patch for the game was dropped.

The patch solved many things, rebalancing heroes and items alike. It also gave us the long-desired head-to-head match-up, so that players now attack and defend in a single one-versus-one match each round. No more squeaking by as the winner on your own board, while losing on someone else’s. Each round has significance now, placing even more importance on player choices from start to finish.

So how did the competitors in the tournament handle the patch?

Some adapted better than others. Two of the bottom three players in the Crimson Gang made in-roads, moving up into the top four. 4he and Joseph both won games today, with 4he winning two and Joseph taking second place twice. This brought them into second and third place, respectively. Rounding out the top four in the NA time zone are MeNoHaxor and BBG. This group was, overall, still very tight on day two. While Ratt dropped behind with 29 points, the first-place winner came in at 54 and seventh place finished at 44.

Compare that result to the first group of the day. The Vicious Order’s first place player had 63 points, and last place finished at 35. There were zero changes in the top four of the Vicious Order. Cmel showed up again on day two, winning two games. snofe slid a bit, but finished second in the last game. Ciaoknives and Yca4 rounded out the top four, each with wins of their own. The real run in this group was maxbringtheaxe, who moved from last place on day one to fifth on day two. Unfortunately, max failed to bring the axe hard enough, because despite a win, a second-place and a third-place finish, he couldn’t close the distance to the top four, sitting seven points out of contention.

The eight players advancing to the Lords Alliance are:

This weekend, we’ll see who can truly master the new patch. Just how strong are knights? Will players become more aggressive in their bid for first place or is a more conservative strategy, with consistently high though not top placements the better approach?

Tune in tomorrow, August 3, to WePlay!’s Twitch channel for the first five matches of the playoffs!