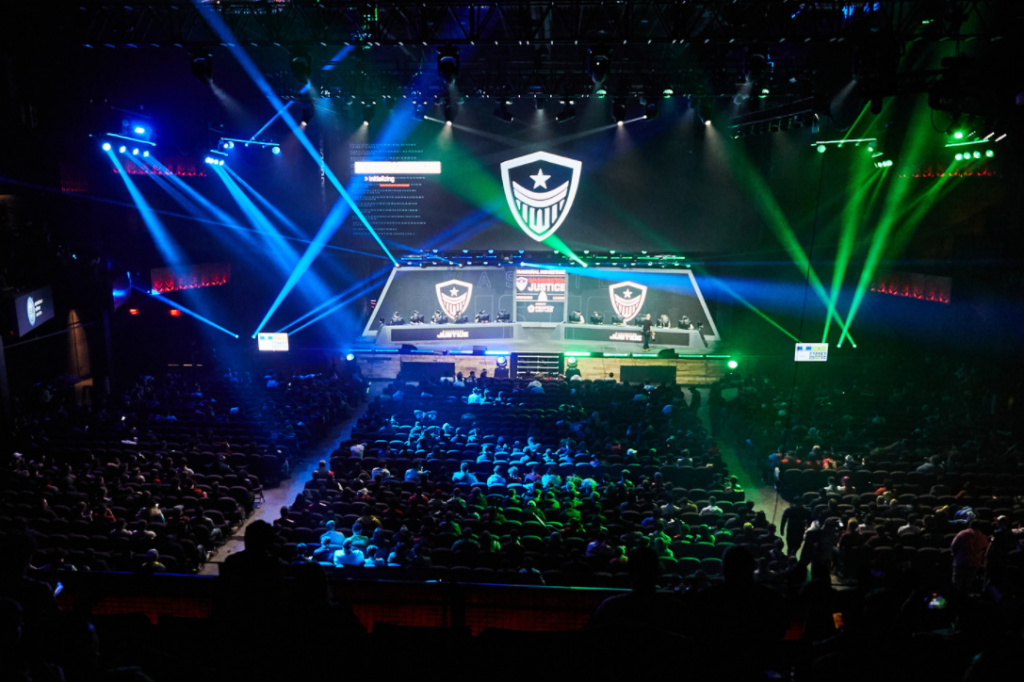 After an abysmal 2020 season, Justice are making a number of changes for 2021. (Photo courtesy Tonya McCahon For Activision Blizzard)

Like many other Overwatch League teams, Washington Justice are shaking things up in the roster department for the 2021 season. The team released five players so far in the offseason, including Chang-hoon “rOar” Gye, Yeon-joon “ArK” Hong, Chung-hee “Stitch” Lee, Hyeon-Woo “JJANU” Choi, and Minseok “AimGod” Kwon. After an unstable and disappointing 2020 season, Washington is hoping to start anew in 2021 with a new group of players.

Roar was the first Justice team member to go. He was released on October 22nd after competing with the team for a year. The former Gladiators player served as the Justice starting Main Tank throughout the 2020 season. After the team repeatedly put on poor performances this past year, it was not surprising to see them release Roar, since his struggles were quite visible.

Justice starting Main Support player ArK retired from Overwatch on November 7th. He played his first Overwatch League season with NYXL before joining Washington Justice for the past two seasons.

𝗧𝗛𝗔𝗡𝗞 𝗬𝗢𝗨!
Today we say thank you to @Arkyjun for an amazing two years as he retires from the @overwatchleague. A leader on and off the field of battle, ArK was an exemplary player and paved the way for Justice. We wish you success on your journey.#JusticeFighting pic.twitter.com/mGGDdmYyzU

On November 18th, Washington announced that had parted ways with AimGod, JJANU, and Stitch. AimGod competed with the team throughout 2020. He previously played with Boston Uprising during the 2018 and 2019 seasons. While with Justice, he served as their starting Flex Support player, playing alongside ArK.

Washington picked up their first new player of the off-season on October 24th, signing former RunAway Main Tank player Tae-sung “Mag” Kim. This is Mag’s first Overwatch League contract, so he will be an OWL rookie in the 2021 season. While competing with Runaway, this player helped them win and place second at several tier 1 Korean Contenders tournaments in the past year, including winning the NetEase Esports X Tournament this past summer.

Coming straight out of an impressive Contenders season, we're thrilled to have Mag join us
as our 𝙛𝙞𝙧𝙨𝙩 new signing!

Justice’ next pick up was Hitscan DPS player Tae-hee “Jerry” Min, who was formerly a starting DPS player for Boston Uprising. Jerry is a highly respected player, who looked very impressive this year with Boston, despite the rest of his team falling well short of greatness. Hopefully Jerry will find more success while competing with Washington next season.

On November 19th, Justice announced that they had signed Flex Support player Hui-chang “BeBe” Yoon to replace Aimgod. Bebe formerly competed with the Hangzhou Spark for two years, and played with Jerry on X6-Gaming for a year before that. He is a highly effective Zenyatta and Ana player, and is a valuable addition to this Washington roster.

On November 20th, Justice signed Main Support player Won-sik “Closer” Jung. Closer played with Dallas Fuel during the 2019 and 2020 seasons. In the inaugural season, he won the first ever OWL season championship while competing with London Spitfire. Although he had a pretty rough season with Fuel last year, Closer is a very capable Support player.

On November 21st, Washington picked up former Philadelphia Fusion Off-Tank player Jun-ho “Fury” Kim. Fury was released from Fusion earlier in November, after putting on an excellent showing during the 2020 season. The South Korean player is also a former OWL champion, since he was a member of the Spitfire along with Closer when they won the inaugural season championship in 2018.

On November 22nd, the team announced that they acquired Off-Tank player Seong-Wook “Ria” Park. Ria served as the starting Off-Tank player for Hangzhou Spark along with BeBe over the past two Overwatch League seasons. He also competed with X6-Gaming along with both BeBe and Jerry in the past.

On the staff side of things, Justice added Ho-cheol “Hocury” Lee to be their new Personal Coach. Hocury formerly served as a Coach and then General Manager of Seoul Dynasty during the first three OWL seasons, so he is a seasoned veteran who brings a lot of proven skills to his new role.

Justice had a rough 2020 season. The team ended their season ranked 19th out of 20 in season record, winning only four games all season. Part of their struggles can be chalked up to the departure of DPS player Ethan “Stratus” Yankel and Corey “Corey” Nigra, both of whom retired halfway through the season. However, the team was struggling to bring in wins even before the departure of their DPS core. In a desperate midseason gamble, the team then went through competitive restructuring in May, releasing their GM Analynn “Bawlynn” Dang and their Individual Coach “Chris “Bani” Benell. The change did nothing to turn around their fortunes, so they are now trying to restructure things yet again in the off-season.

We will update this article as Justice releases further information about their post season roster moves.