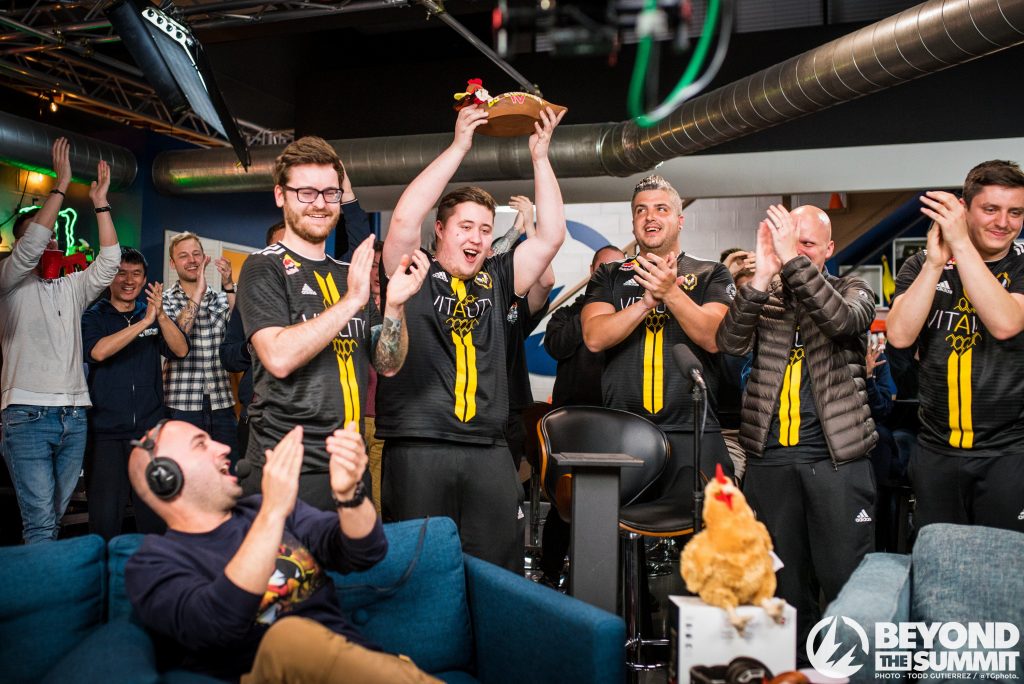 Vitality was the first-place CS:GO team at the entertaining cs_summit 4. (Image courtesy of Beyond the Summit| Photography by Todd Gutierrez)

The French team Vitality secured their first tournament victory at cs_summit 4, winning $64,500 USD. The up-and-coming team beat North American giants Team Liquid in the final in a grueling series. Vitality eventually won 2-0. The event was full of laughs and the Summit series has been labeled one of the best events in the CS:GO tournament cycle due to its laidback and hilarious nature.

Cs_summit 4 took a spin on multiple CS:GO spots, such as interviews, player profiles and incredible reactions.

On opening day, Team Liquid and Vitality both took down Ghost Gaming. These teams looked strong going into their next matches. To follow with that momentum, Vitality managed to beat NRG by winning both maps in their series. Finnish team ENCE looked shaky as they traded maps with eventual last-place Renegades. However, the Australian team couldn’t take a map win. They also lost both maps to NRG to close out day one at cs_summit 4.

The first day was riddled with hilarious moments, including some of the commentators’ reactions to incredible plays from these teams. As cs_summit doesn’t have the same rules as normal CS:GO tournaments, Mohan “launders” Govindasamy expressed an incredible casting moment as Renegades substitute Owen “smooya” Butterfield clutched the win for Renegades against ENCE on Train.

The second day began with Team Liquid losing both maps to a strong Vitality. Many cited the tactics of Vitality’s T-Side, with especially good performances from everyone on the roster. Team Liquid continued their woes as they traded maps with ENCE. NRG had a much better showing as they traded maps with ENCE and fended off Ghost Gaming by winning both maps. However, to end the night, Ghost Gaming rebounded with a two-map victory over Renegades.

The final series saw some incredible plays as MVP Mathieu “ZywOo” Herbaut for Vitality contributed to their success.

The third day saw Finnish side ENCE trade maps with Vitality and Ghost Gaming, as they looked to make their way into the fourth day. With the loss against ENCE, Ghost Gaming were eliminated from the tournament. Renegades had a poor showing, as they traded maps with Vitality but then lost both maps to Team Liquid, ending their run in the tournament. To finish the day, NRG traded maps with Team Liquid, putting both teams in one semi-final, with ENCE and Vitality in the other.

The Team Liquid versus NRG match saw the infamous Vertigo runboost performed by Ethan “Ethan” Arnold and Tarik “tarik” Celik from NRG. It was not only one of the best plays of the tournament, but got a great reaction from the couch.

The tournament also had interviews between series. One moment saw Ryan “Freakazoid” Abadir’s mom take the microphone to interview several players and commentators, resulting in some witty responses.

The final day saw the aforementioned teams play each other in two best-of-three semi-finals, with the winners securing a place in the final. French AWPer Mathieu “ZywOo” Herbautshone as his side defeated ENCE 2-1, with incredible no-respect plays on Inferno. By contrast, Team Liquid took down NRG 2-0, to secure themselves a place in the final.

On the final day, cs_summit also uploaded a YouTube video regarding David “prius” Kuntz, the observer of the matches. The video followed his story as commentators jokingly comment on his background appearances and his lack of on-screen content.

To finish the event, Vitality swept Team Liquid in a 2-0 fashion, continuing Team Liquid’s woes of losing in Grand finals. Both maps were close, but Vitality had the edge in their strategies and sheer gunskill against their opponents. ZywOo didn’t show any signs of slowing down, as he clutched multiple rounds, including a 1v3 on Overpass on the second pistol round.

While CS:GO events are relatively the same from one event to another, cs_summit provided another incredible and hilarious event, with especially good content and even better Counter-Strike. Hopefully, Beyond the Summit should be back next year for their fifth iteration in the cs_summit series.