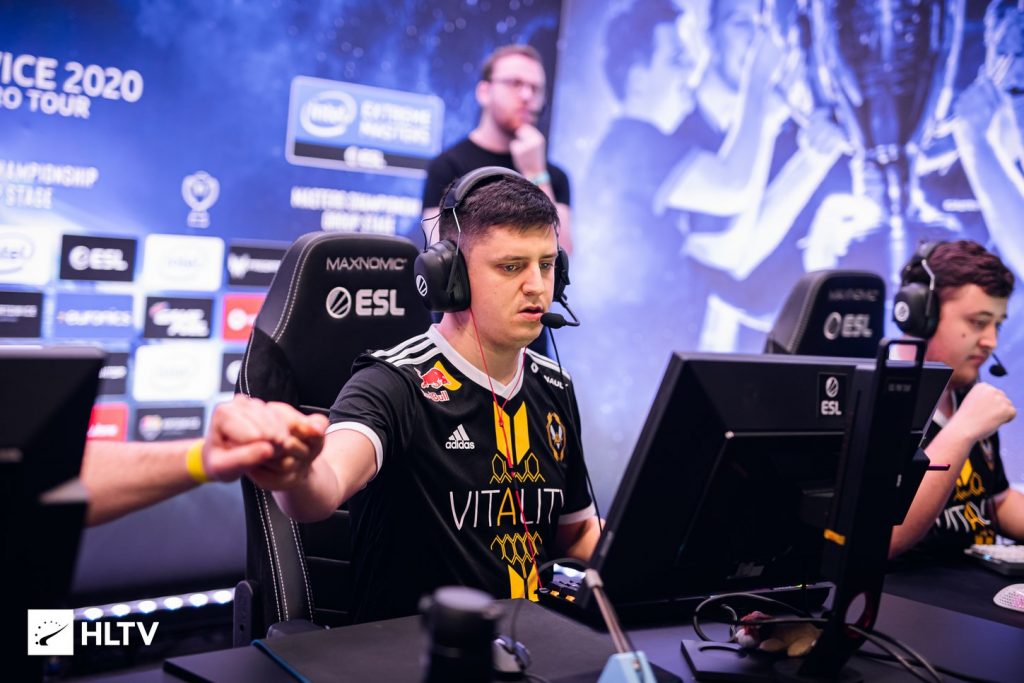 Vitality have come out on top of a very competitive group and will be a favorite to take home the trophy. (Photo courtesy HLTV)

The group stage of IEM New York Online’s European branch has come to a close. Of the eight teams who participated, only four will have a shot at the title. Vitality and OG have gone undefeated in their respective groups and will be the top seeds. Right behind them are Fnatic and FaZe Clan who advanced after winning their decider matches.

Group A at IEM New York EU played host to four amazing teams on paper. Vitality, Fnatic, G2 Esports, and Complexity brought everything they had to try and make playoffs. As a result, every single match played had at least one map go to overtime. The margins for error were miniscule in this group of death.

The opening match pitted Vitality against Fnatic. The Swedish side chose Inferno for their map. Fnatic started on the T side and got a decent lead early. The 9-6 score line put pressure on Vitality to deliver. Fortunately for them, every player was on point for their offense. Vitality one-upped Fnatic by winning 10 of the 13 rounds played, giving the French side a map one victory.

After that, it was onto Vertigo. Despite another early lead from Fnatic, Vitality was able to claw back to an even 8-7 score line. The same happened in the second half with Fnatic’s 13-10 lead disappearing into overtime. However, the Swedish squad did come out on top in the end 19-17 thanks to Freddy “KRIMZ” Johansson and Robin “flusha” Ronnquist combining for 61 kills.

Overpass was the deciding map in the series. For the third straight map, Fnatic were the ones with the hot start. They found themselves with a 9-6 CT half after winning seven of the last eight rounds. They even had another big win streak to start their offense. Fnatic hit match point at 15-9, giving them six chances to close out the game. Instead, Vitality managed to force overtime. The French comeback would be successful after Dan “apEX” Madesclaire and Mathieu “ZywOo” Herbaut each found 32 frags on the map. A 19-16 result put Vitality through to the winners’ match.

Meanwhile, Complexity had finished a 2-0 victory against G2 Esports. Although it was a sweep, Complexity only had a round differential of +5 after a 16-13 on Overpass and 19-17 on Vertigo. Now, these two top 10 squads would face off for a spot in the playoffs.

The first map was Complexity’s Mirage. Unfortunately, they couldn’t quite get going on their T side. Vitality was able to stonewall their opposition, allowing only four rounds in the half. When the sides swapped, Vitality remained the favorite to take the map. The fastest game of the group ended in a 16-8 for the French side.

Dust2 on the other hand was a different story. Complexity started out their CT side with a 7-1 lead. However, Vitality was able to find their avenues into the bomb sites and reduce their deficit to just one round. The second half was very back and forth. No team ever held a lead above three rounds as the map ticked into overtime. It was Vitality who would close out the map 19-16 to earn their spot in the playoffs.

The final ticket would go to the winner of Complexity vs Fnatic. Train was the first map. The usually CT sided affair went about as expected with the defensive Complexity side earning a 9-6 lead at the half. AWPer Valentin “poizon” Vasilev was the focal point for the squad. He earned a massive 28 kills and 148.1 ADR in just the first half, good for a 2.26 HLTV rating.

Complexity started off their offense with five straight rounds, putting them at an oppressive 14-6 lead. Fnatic needed to be nearly perfect if they wanted a chance at winning their own map. Once the Swedes found their stride, they never looked back. Nine of the next 10 rounds all belonged to them, forcing Train into overtime. Fnatic’s momentum couldn’t be broken as they took a 19-16 come from behind victory.

Complexity’s Vertigo pick also came down to the wire. Both squads looked well prepared as the score remained close throughout. Ludvig “Brollan” Brolin and Benjamin “blameF” Bremer were in a war to see who could carry harder. Each player hit 30 frags and about 100 ADR by the end of it. With the score tied at 14 apiece, Fnatic found the final push needed to take the 16-14 win and the final playoff spot.

On the other side of the group stage, OG, FaZe Clan, BIG, and Heroic were fighting to dominate their competition. OG vs BIG was the first matchup and featured the only overtime of the group. The first half of Inferno was very close with OG coming out ahead 8-7 from the CT side. BIG saw much more success on theirs early on, taking a 14-10 lead. However, they were unable to close out and let OG force OT. Four rounds later, OG secured map one 19-15.

Now on Dust2, the first half shaped up very similarly. This time, BIG held the 8-7 advantage as the teams swapped sides. Once on offense, OG completely steamrolled their opponents. Just 10 rounds later, the series was over as OG took the 16-9 victory.

The other first round matchup saw FaZe dominate Heroic with a 16-11 on Mirage and a 16-3 on Train. The winners’ match would be between the two lower rated teams in the group. Group B’s climax turned into a rather one-sided affair early on. Starting on the CT side of Dust2, OG both outplayed and out aimed FaZe. Valdemar “valde” Bjorn Vangsa went above and beyond with a 30-11 K-D ratio and 115.9 ADR.

OG’s 10-5 lead at the half soon turned into a comfortable 16-12 win. FaZe now needed to take two in a row, starting with their opponent’s Overpass pick. The first half was at least competitive. FaZe’s CT side went just above even, putting them in position to make a comeback. Unfortunately for them, OG’s defense was formidable. FaZe were simply outclassed as only one player broke a 1.0 HLTV rating compared to four from OG. A 16-11 finish solidified a playoff spot for OG.

Fortunately for FaZe, they would have one more shot against BIG. This time, it would be their turn to outclass their opposition. On Mirage, FaZe only managed eight rounds on their CT side. The closeness would give false hope to BIG as their defense was efficiently dismantled by Nikola “NiKo” Kovac and co. A 16-9 result put FaZe on match point.

Nuke was BIG’s last chance to stay in the tournament. However, they couldn’t make much headway on their T side. Helvijs “broky” Saukants’s AWP locked BIG out of many avenues as he earned 22 kills and 134.9 ADR in the first half. With a 10-5 lead, FaZe went into their T side feeling good. NiKo picked up where broky left off and led his team to the 16-11 finish and the match victory.

The top four teams at IEM New York EU will have just one day to prepare for their playoff matchups. Semifinals begin on October 10th at 8:00 A.M. EST. The matchups are as follows: