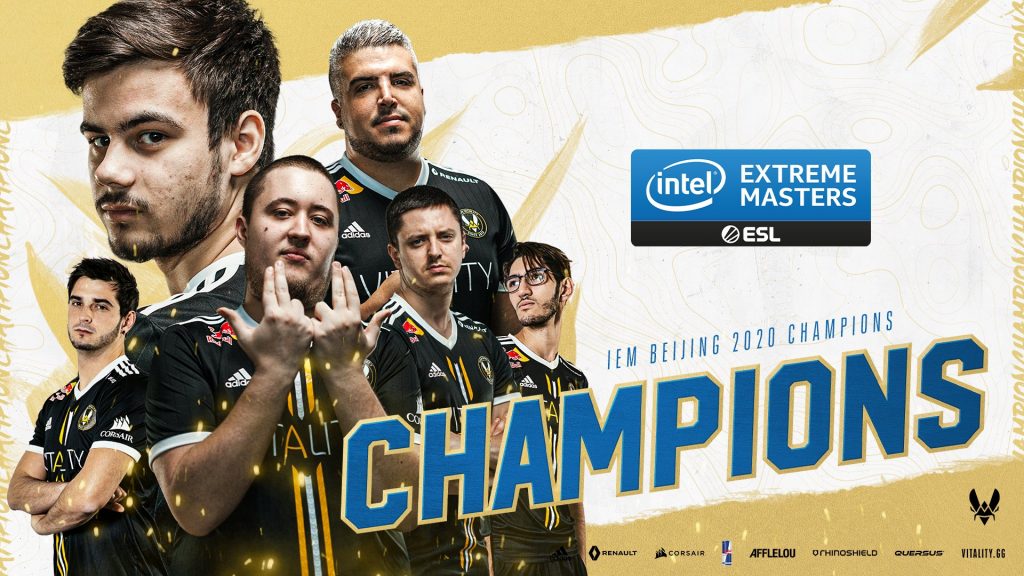 IEM Beijing Online: Europe has reached its heated conclusion. In what became the second reverse sweep in a best-of-five finals of 2020, Team Vitality took down Natus Vincere over the course of five maps. This was the fifth grand finals appearance of the year for the French squad, but only now have they come away with a title.

THEY ACTUALLY DID IT. @TeamVitality REVERSE SWEEP THE GRAND FINAL OF #IEM BEIJING AGAINST @natusvincere!

SEE YOU AT THE #IEM GLOBAL CHALLENGE BOYS! 👋

A Straight Shot to Finals

Vitality came into IEM Beijing as the top-rated team in the world. However, their group stage performance did not live up to expectations as they fell to FaZe Clan in the first qualifier match. Luckily for Vitality, they were able to advance in a lower seed alongside Na’Vi.

Their first playoff match was against Heroic. Vitality was easily able to take their own Overpass pick 16-7 before narrowly falling on Heroic’s Nuke in overtime. A confident 16-12 closeout on Inferno put the French side through to the semifinals.

There, they met up against a hot Complexity squad who were coming off of a 2-1 win over Na’Vi and a 2-0 sweep against BIG. Vitality were unfazed by their opponents, holding down the fort on Vertigo 16-11. One last decisive 16-7 result on Complexity’s Mirage was enough to send Vitality to their fifth grand finals of the year.

Standing opposite of Vitality was none other than Na’Vi. The CIS squad made quick work of Astralis in the quarterfinals before crushing G2 Esports on the final two maps of their series. This was shaping up to be a close final full of tension.

Instead, Na’Vi were ruthless from the get-go. Starting on Nuke, Na’Vi’s T side dominated early. A pistol round victory snowballed into a 7-0 lead. Vitality needed to fight back now if they wanted a chance at an early map upset. However, Aleksandr “s1mple” Kostyliev was already revved up and ready to go.

Even so, Nuke wasn’t a map the French side had expected to take. Surely things would improve come Dust2. Instead, it was more of the same. Vitality at least took their first pistol round of the grand finals and used it to pull ahead 5-0. Once Na’Vi got set, it was time for the s1mple show yet again.

While s1mple was a massive thorn in Vitality’s side, there were also many issues with how they were playing. Over the first two maps, only one player had earned a positive K-D, that being sixth man Nabil “Nivera” Benrlitom on Dust2. More of the team needed to step up if they wanted to avoid a fifth consecutive grand finals heartbreak.

Na’Vi’s Overpass pick was up next. Vitality had the benefit of starting on the CT side. Their discussion during the break clearly prompted a change of pace. All of a sudden, Vitality were playing to deny space from the CIS squad, contesting them at multiple points. Vitality’s confidence slowly came back as their downtrodden expressions turned into ones of hope. A late first-half play by Mathieu “ZywOo” Herbaut exemplified this, bringing Vitality to a dominant 12-3 lead.

The comeback was now underway. Vitality was able to easily close out the map 16-6 with three players breaking the 20 frag mark. On top of that, the French side now had the momentum going into one of Na’Vi’s less favored maps in Inferno.

Na’Vi would take their initial CT side pistol round but were unable to find a meaningful start from it. Instead, Vitality tossed Nivera an AK-47 and let him get to work.

Vitality took seven of the next eight rounds in a row. A pair of bombsite retakes would bring Na’Vi up to four, but Vitality’s offense was just too oppressive. Four players all had a rating of 1.23 or greater on their way to a 11-4 first half.

A second-half pistol victory would help Vitality put 14 on the board. Na’Vi found a bit of success on their T side, but they were nowhere near being competitive on the map. An even 5-5 half solidified the 16-9 result in favor of the Frenchmen. Everything would come down to one final showdown.

Mirage was the chosen location to crown the IEM Beijing Europe champions. In contrast to the scene after map two, Vitality were now the ones who looked like the title was in their grasp while Na’Vi was floundering looking for answers. As if to add insult to injury, ZywOo immediately turned a “nearly impossible” pistol round in Vitality’s favor with a 1v5 on just 9 HP.

After that play that will go down in the history books, Vitality stepped on the throats of the demoralized Na’Vi. A 6-0 opening became a 10-5 lead from the T side. ZywOo was sitting on a 1.76 rating at the half with Kevin “misutaaa” Rabier right behind him.

Na’Vi’s flame burned a little brighter after winning the second half pistol, but the initial three rounds were all they could muster up. Once they had their weapons, Vitality took what was rightfully theirs with a six-round win streak to end the game.

Vitality have finally broken their grand finals curse with their victory at IEM Beijing. This team has been amazing for all of the online era of Counter-Strike but could never quite get over the finish line for so long. Now with their true six-man roster fully implemented, Vitality are undeniably the best team in the world, and they have some hardware to prove it.

Along with the trophy comes $60,000 and a guaranteed spot at the IEM Global Challenge in December. For now, this team has earned their celebration. Their next appearance will be at the BLAST Premier Fall Finals beginning on December 8th.