Virtus.pro Remain Undefeated in a Perfect ESL One Performance 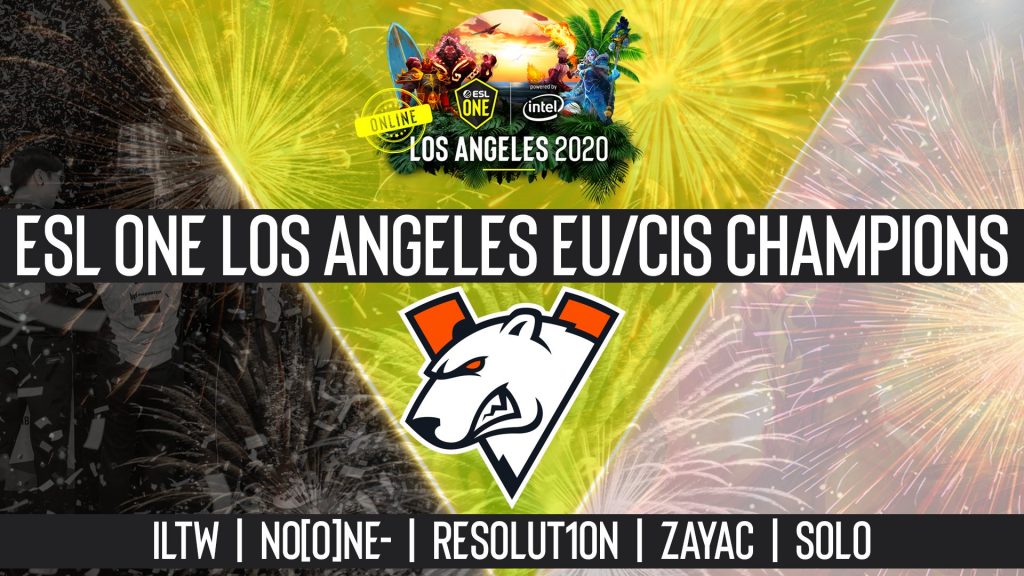 Although pushed to the limit by OG, Virtus.pro came back to win at ESL One Los Angeles Online. (Photo courtesy Virtus.pro)

Virtus.pro are the champions of ESL One Los Angeles 2020 Online: Europe & CIS, having defeated OG in a five game series that pushed both teams to the limit.

Today @virtuspro was the better team.

After 5 intense and fierce games they are taking #ESLOne Los Angeles Grand Finals.

The CIS team went undefeated in match series throughout the entire tournament, dropping just five games in their entire event, with two of them coming in this final matchup. OG for their part battled through adversity, coming back from an 0-1 start to the finals to lead the series 2-1. In then, though, it was all for nothing as Virtus.pro vanquished the cunning and dangerous OG stack in a rematch of the Upper Bracket Finals.

OG fly to the finals

But before OG could clash with Virtus.pro, they’d have to face a team that’d spent much of the past week upsetting top teams. Vikin.gg also had a good record against OG, having defeated them in the group stages, so this was no meager threat.

But OG banned away the Broodmother which had single-handedly won Vikin.gg two games in Saturday’s series, while picking up the super-strong Terrorblade pick for SumaiL. In game, OG played remarkably passively for the early game, perhaps just to allow the Terrorblade to scale. This worked to perfection, as the team rolled over their opponent’s in dramatic fashion.

For the next game, Vikin.gg felt confident enough to leave the Terrorblade open, and counter pick it. But OG again used a trick they’d been utilizing heavily, putting Neta “33” Shapira as the mid laner. The former Alliance player taking to the middle lane threw Vikin.gg’s counterplay plans off, and OG quickly snowballed to another victory.

Just like that, the marauding vikings of Vikin.gg were eliminated from ESL One Los Angeles in third place, having failed to pull off yet another upset. They take home $25,000, having proved to many that this organization is nothing to underestimate. What’s more the team wasn’t done for the day, heading to the finals of the GG.BET StayHome Challenge later in the day.

Heading into the finals, OG started things off spicy with another SumaiL Terrorblade pick, with 33 on beastmaster in the mid lane. Meanwhile, VP broke out the Bristleback, Death Prophet and Axe, a potent set of heroes, each with their own point in the game where they’re strongest.

It was a case of VP having their chips spread very thin, gambling small on lots of safe picks. But almost immediately it paid off, with the Terrorblade being killed by the Bristle/Oracle in lane, despite the high base armor of SumaiL’s hero. As a result, OG found themselves on the back foot as VP took everything they wanted. But OG still had plenty of tricks up their sleeves, shooting back with crafty team fights to eat into their opponent’s advantage.

But even with those brief moments of reprieve, if OG gave VP an inch, they took a mile. Roman “Resolut1on” Fominok on his Axe just dominated from the three-position, dunking on his opponent’s with some incredible team fight plays.

However, an incredible hold by OG caused a huge 2k swing in gold, giving OG another chance to get back in the game. But even with this chance, the clean play and tremendous lead of Virtus.pro were too much to handle as OG fall in game one.

For the second game, with the Death Prophet banned out, OG grabbed a Shadow Demon, Legion Commander and Ember Spirit combo, while VP had a huge team fighting composition. With an Enigma and a Dragon Knight, OG would be doomed in this game if they failed to stop their opponent’s from scaling.

After another slow start, the late-game focused comp from VP meant OG could grab a lot of early advantages. This led to some crucial team fights, with the Wall of Replica from Dark Seer neutralizing VP’s carries, and leaving them too scared to engage.

After capitalizing on an early lead there was really nothing VP could do against a fed lineup, and OG took the lead. So far we’d had three games, and all of them had barely seen past 30-minutes, and had been well in hand by that point anyway. Game four would be no different, with Virtus.pro rolling over their opponent’s with a hyper fed Templar Assassin. Vladimir “No[o]ne” Minenko showed what a ping advantage could really do against OG’s haphazard mix of stand-ins and players on 120 ping. His scoreline at the end of this game was something to marvel at.

We're going to a Game 5! @virtuspro sweep through @OGesports thanks to the flawless @Noone_dota Templar Assassin!

Our last game is about to begin; don't go anywhere! #ESLOne
📺 https://t.co/RUTJQihdBh pic.twitter.com/46a6dTA5Ce

Push to a game five, with both teams at their wits end looking for a way to end, the compositions looked like a lineup of the best performing heroes from the last four games. OG rallied behind a SumaiL Fire Spirit pick which had been so good in game three, while VP went back to the Bristleback.

A scrappy matchup to start off with constant fights throughout the early game. However, this is just what OG thrive on, and with this SumaiL was able to grab another big lead. After this, it looked almost like a replay of game two, where Ember Spirit had been so dominant for OG. Except this time there was a big turnaround at Virtus.pro’s high ground, throwing the delicate balance of momentum out of the game.

Now, even with Virtus.pro taking the lead, it was anyone’s game. One well-played fight would win either team the game, as each team battled to keep their supports alive. Eventually it would be Virtus.pro who managed to secure the fight, and push on OG’s high ground, and shortly after take the game.

Grabbing Defeat from the Jaws of Victory

Virtus.pro looked incredible in this event. Everything has finally clicked for a team that has slowly been building up to something great. They’ve been consistent, adaptable, and more often than not, victorious against almost every challenge they faced. It’s also a great performance for stand-in Igor “iLTW” Filatov, who the team should now seriously consider bringing in full-time. Especially with his share of $60,000 to distribute.

For OG on the otherhand, it’s been a crazy tournament. With the switching of roles, the pickup of 33, Sébastien “Ceb” Debsbeing waylaid by a scooter accident and missing one of the series, SumaiL playing on 120 ping, and so many other things going against them, it’s incredible that this team would still make a finals. Yet they did, and this team have once again proven why no one every counts them out, or underestimates them. OG Dota is still something special, and they even take home $38,000 in prize money for their trouble.

ESL One Los Angeles Online has been an incredible event. A prototype to show what ESL is capable of as Dota 2 shifts to an online league format next season, and a testament to how adaptable this organizer can be in the challenging times we live in. But if you’re sad to see pro Dota end for now, don’t be! Beyond the Summit, Moon Studio, and WePlay! all have events either ongoing or upcoming.