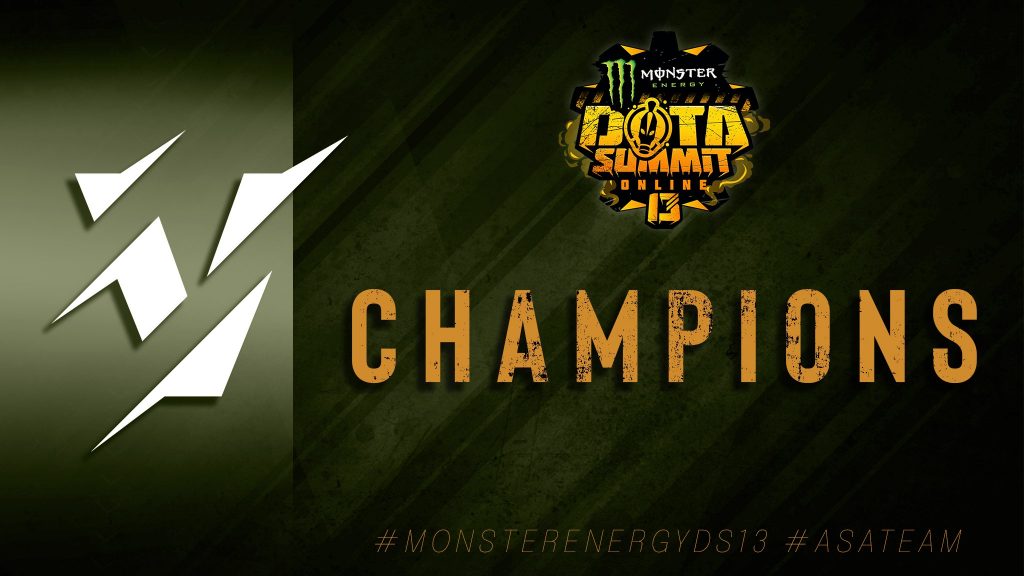 Despite being just weeks off their surprise win at ESL One Germany, Team Liquid were humbled by the upstart Vikin.gg roster. (Photo courtesy Vikin.gg)

A shock upset ended DOTA Summit 13 Online: Europe & CIS, as Vikin.gg defeat Team Liquid 3-1 in the Grand Finals. Vikin.gg, the European team which has been on the cusp of becoming a top tier team for months, finally pushed themselves into the next level defeating the heavily favored Team Liquid.

WE DID IT! 🔥🔥We are the #MonsterEnergyDS13 Champions! 🏆

We take the Grand Final 3-1 against Team Liquid! pic.twitter.com/AkSJkKptH2

Vikin.gg has gone from strength to strength in this online era of Dota 2. Since their founding just a year ago, the team has had just a single roster move since January. As a result, the same stack of Indji “Shad” Lub, Miroslav “BOOM” Bičan, Tobias “Tobi” Buchner, Adam “Aramis” Moroz, and captain Melchior “Seleri” Hillenkamp have competed in over 25 events together. They’ve clashed with the top squads in Europe, and even won September’s BTS Pro Series Season 3: Europe & CIS, again upsetting their opponents, the Mudgolems, in the final.

Team Liquid, in comparison, were riding high after ending the streak of Team Secret at ESL One Germany, eventually winning the tournament outright. However, at DOTA Summit, the team immediately looked shaky, dropping their first game of the tournament to Brame, a relatively unknown Swiss team. Liquid took a further game loss in their best of three series against Yellow Submarine. In both cases it was Liquid’s draft which let them down, getting caught off guard by a player’s signature hero or a strong composition.

As a result heading in the finals of this best of five, it was highly likely Vikin.gg would take at least one game off TL. Even so, it was Team Liquid who shot first with a dominant carry game from Michael “miCKe” Vu on Anti-Mage. After getting the perfect start in lane, his raw team fighting potential was able to brutalize and overpower Vikin.gg who looked stunned by the raw talent of TL’s carry. Following this performance it would have been easy to call the series in favor of Team Liquid.

.@mickeDOTA playing god like and @TeamLiquid takes game one in the #MonsterEnergyDS13 EU/CIS Grand Final

But Vikin.gg wasn’t done yet. Firing back by putting BOOM on Lina, it was his lane to lose, against a comfortable matchup with Gyrocopter. After snowballing both their carries, Vikin.gg headed into their opponent’s side of the map and let fights come to them. But with their fed Spectre and Lina it was really just a matter of shooting ducks in a barrel as one by one TL died in each fight. Vikin.gg took the win and evened up the finals.

With all of TL’s previous performances in this event having them drop games to lesser opponents, it initially seemed like Vikin.gg’s win was just a case of good luck. But as the third game spiralled into the mid and late game, it was clearly no fluke by the Vikings. Team Liquid battled for all they were worth in the third match of this final, but could do nothing to stop Shad on his Medusa. The hard-scaling hero was able to kite and kill TL’s roster despite the best attempts of Tommy “Taiga” Le and Samuel “Boxi” Svahn to lock him down with their Dark Willow and Mars picks.

In the final game, it was really already over for Team Liquid the moment the Medusa was locked in. Despite it looking like another hard matchup to scale into, Vikin.gg executed with precision and allowed Shad to reach his full power as early as 20 minutes in. With nothing to do but watch their structures be demolished, TL found themselves tapping out with GG just 26 minutes in. A final stomp to prove Vikin.gg’s dominance of the match.

Ultimately the finals of this tournament are a lesson in keeping a roster together – in both cases. Vikin.gg, as a consistent stack of five, have grinded through tournaments for months, slowly improving, learning matchups and drafting. Now, they are finally performing at a level which has won them two tournaments out of their past three. It’s a great record for a team that wasn’t even on anyone’s radar at the start of the year, and are now taking home finals with 3-1 results, and pocketing $21,000 in prize money. It shows the value of sticking together, instead of cycling through new players and lineups.

Team Liquid are also a stack that’s been together for a long time. Originally part of Alliance, the team has gone unchanged, having slowly improved to the point where they’re clearly one of the best in the European region. However, this loss shows that there’s still work to be done, especially when facing opponents who they may not be as familiar with.

Both these teams will be in action again in just a few days. The EPIC League Division 1 kicks off on November 12th, running right through until December 13th. Great news for fans, as with a round-robin group stage, these two squads will get a chance of a rematch much sooner than you may expect.