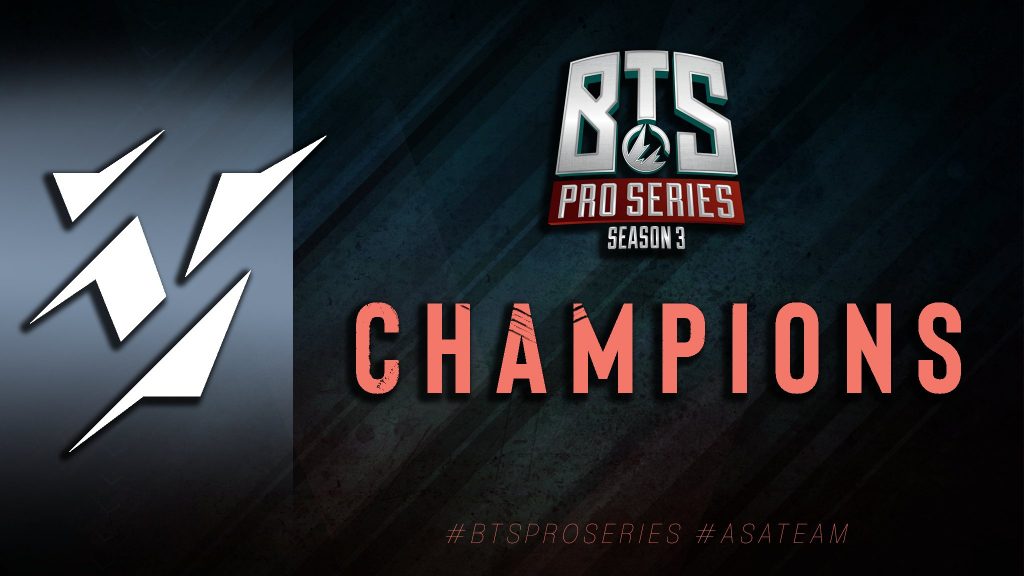 Vikin.gg took home an incredible win after an impressive 3-0 of the upstart mudgolems. (Photo courtesy BTS)

Vikin.gg has defeated mudgolems to take home the victory at the BTS Pro Series Season 3: Europe after a brutal series. The two European teams clashed in a three game series that was far closer than the scoreline suggests. After an incredibly dominant tournament from the mudgolems, it was the tier two veterans Vikin.gg who edged out a victory, defeating their opponent’s 3-0.

The victory brings the end to a remarkable run for the mudgolems. An unsponsored stack of top-tier players, including Adrian “Fata” Trinks and Neta “33” Shapira, the mudgolems had a stand-out tournament. They went almost undefeated in the group stages, and entered the playoffs as favorites to win it all. After a shaky start, dropping a game to Khan, the squad 2-0’d Ninjas in Pyjamas to head to the grand finals.

Their biggest kryptonite? Anti-Mage. But not on the opposing team. In many of the games the team lost, the fact they early picked Anti-Mage led to an unfavorable draft. Even with skilled players on the carry, they seemed to suffer in bad matchups. Yet no one was quite prepared for the defeat that Vikin.gg would hand them in this finals.

Game one started off clearly in Vikin.gg’s favor. Hot off their defeat of NiP, the team learned from their risky almost-defeat at the Ninja’s hands. Picking up Chen for Melchior “Seleri” Hillenkamp, the squad were able to get favorable zoo creeps from careful farming. This netted them first blood and a win in the laning phase. Forced into turtling by their opponent’s the mudgolems quickly found themselves in fight for survival. Unfortunately their composition simply didn’t scale compared to Vikin.gg, and by 18 minutes, the squad were forced into defending their high ground.

You can run, but you can't run from @boomdota 😤

The squad were able to hold off for a relatively long time thanks to Adrian “Fata” Trinks’ Snapfire and Mortimer’s Kisses. A fiery artillery barrage took down any Viking’s foolish enough to try and engage. Because of this solid defense, Vikin.gg were forced into fighting mudgolems in their jungle. But despite their best efforts, the mudgolems couldn’t find the picks they needed, and fell in game one to their opponent’s. A demolition, 20-2 scoreline for Vikin.gg

For the second game, mudgolems made sure to ban the Chen away to prevent a repeat of last game. However, Vikin.gg started off their draft with a dominant pick in the Faceless Void. Shifting that to the side lane, the mid lane was left for Tiny who was able to bully the Nature’s Prophet. However, despite a strong start for Vikin.gg, it was the mudgolems who took the lead early with a much more aggressive early game. However after a very good gank top, the momentum shifted.

Some interesting misplays, including a mistimed Roshan contest and being unaware of their opponent’s vision allowed mudgolems back into the matchup. Each time it looked like Vikin.gg had the advantage, mudgolems would grab a big team fight victory and even things up. As the match slowly descended into the super-late game, there was little sign of either team’s highground breaking. Finally after grabbing Aegis, a refresher, and every advantage they possibly could on Faceless Void, it was Vikin.gg who managed to wrap up and take a tight hour-long game.

For the final game, mudgolem’s list of must-bans started to grow. They had to take away Chen, Io, and Underlord after their dominating performances earlier in the series.

When you get 2 bans for your Position 5, that's when you know you're doing great 🥰 pic.twitter.com/hFOl1HS1qI

But this allowed Vikin.gg to pick up some dangerous combinations with Lina, Medusa, and Slardar. To counter this, mudgolems gambled on a Phantom Lancer, which would carry the game if they could allow him to survive the laning phase.

In the third match, the game quickly turned into a split map, with each one position quickly taking the lead in their respective lanes. This potentially set up for a deadly clash between hyper-farmed carries. But Vikin.gg quickly gained an advantage on the map, and forced the mudgolems into a more defensive situation. After putting down good vision, and staying safe for a while, mudgolems started to try and take fights – only to find themselves killed off on every occasion. By playing passively they’d let Vikin.gg get too much of an advantage and sadly after a tremendous game three, the series ended 3-0. The loss put to bed hopes of miracle first-tournament victory for mudgolems, in a relatively significant upset.

Mudgolem’s put on a hell of a show this tournament. It seems incredibly unlikely that these players will be without an official team for long. Perhaps only the lack of more concrete information about the upcoming Dota Pro Circuit season prevents them from being signed already. Despite initially looking like a thrown together team on paper, in their tournament performance, the mudgolems showed a level of competitiveness that put them far and away above many of their peers in the event. It will be incredibly exciting to see what’s next for them.

Vikin.gg, on the other hand, have leveled up in terms of their quality. They could reliably be expected to take one or two games off of top-tier teams, but now they’re operating at a speed that’s far beyond anything we’ve seen before from them. The thing that most stood out was their drafting. They showed how a coherent team can out strategize a stack of players who don’t have that same long-time synergy. It will be interesting to see whether the squad can take this momentum into the upcoming ESL One Germany event.