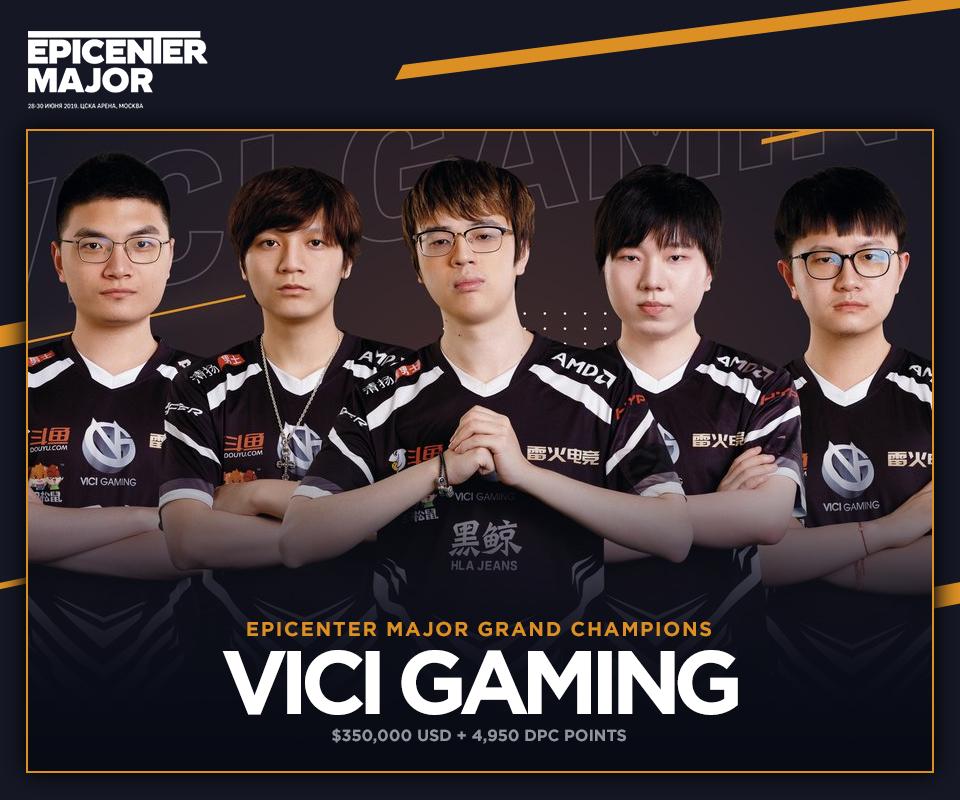 Vici Gaming win the EPICENTER Major in a stunning 3-2 victory over Team Liquid. (Image via EPICENTER)

In a 3-2 Grand Finals series, Vici Gaming fended off Team Liquid for the second time at Dota 2’s EPICENTER Major.

In the upper bracket finals, Vici Gaming beat Team Liquid 2-1, sending the European squad into the lower bracket. Liquid had to fight through Virtus.pro earlier in the day, securing their Grand Finals spot with a 2-0 win over the home crowd favorites. After a brief break, Liquid went on to face Vici Gaming again.

The series started feeling like this was Team Liquid’s series to lose. Coming from the lower bracket, Liquid had beat Virtus.pro in a 2-0 series earlier in the day. Warmed up and ready to go, Amer “Miracle-” Al-Barkawi was a god on the Anti-Mage, farming quickly, relentlessly pressuring Vici Gaming. The Chinese squad made some good efforts to push back high ground attempts when Team Liquid was trying to crack their tier three towers. But it always felt like Team Liquid was in control, and after 42 minutes, Vici Gaming tapped out.

Vici Gaming turned it on for the rest of the series.

Game two looked even until 15 minutes when a pair of pick-offs on Team Liquid put Vici Gaming slightly ahead. That lead was solidified after a 2-minute long team fight that saw all five of Team Liquid’s heroes die while Vici lost two heroes, plus Grimstroke twice. Ultimately, Zeng “Ori” Jiaoyang’s Death Prophet was the tanky-damage dealer that Vici had lacked in game one. He was able to take most of Liquid’s focus, wearing down their resources so the rest of Vici could leap in and pick them off. Team Liquid were done at 27 minutes.

The third game saw Team Liquid draft the Aliwi “w33” Omar Timbersaw. The hero had only been played in one other game during the event, during the Alliance versus Gambit Esports banger on Friday. Alliance won with it.  And the early game looked pretty good for Team Liquid. They flirted with a net worth lead for the first 25 minutes of the game. But Vici was just waiting until their farm-intensive Sven and Medusa had enough time to get online. And once they did? On the Vici side, only their two supports died in the last ten minutes of the game. They claimed the victory just before 40 minutes.

Game four is the must-watch game of the series. Vici Gaming was winning the game. They took the early game pretty solidly. Miracle-‘s Arc Warden kept picking and poking and delaying the game. Up 42-43K in net worth at the one hour mark, Vici Gaming tried to push into the Liquid base in the top lane. And… things went side-ways for Vici Gaming.

Sadly, Twitch clips only permit sixty seconds; you will want to go check out the full game, certainly the last ten minutes of it. Team Liquid were able to take down Vici Gaming and then race to their Ancient to secure the game.

So after many hours of Dota 2, not just today but over the past weeks and months even, the final day of the Dota 2 Pro Circuit comes down to a single game. The fifth game between Team Liquid and Vici Gaming to determine whether Liquid would win a DPC event for the first time this season or whether Vici Gaming would join the likes of Team Secret as the two repeat Major winners this year. Both teams had already clinched their attendance of The International 2019, so the series was purely for bragging rights. And both teams wanted them.

Team Liquid just had nothing left to give in game five. They couldn’t keep up with Vici Gaming’s pace, couldn’t delay the game long enough for Miracle-‘s Spectre to become relevant. After the excitement of game four’s ending, it was a bit anti-climatic. Vici Gaming were relentless, and they played it so clean.

With the 3-2 win, Vici Gaming takes first place at EPICENTER. They go home with $350,000 USD and 4,950 DPC points. They land in third place in the DPC rankings and are looking hot heading into The International 2019.

EPICENTER wrapped up the second Dota 2 Pro Circuit season with a few technical issues, but some incredible Dota 2 and amazing stories. From OG qualifying for TI with their coach as a stand-in, the final DPC spot being decided in a best-of-three elimination match between Alliance and Gambit Esports, and that best-of-five series between Team Liquid and Vici Gaming, there was plenty for fans. The set for the event was gorgeous, a full Dota 2 landscape constructed at the center of the CSKA Arena in Moscow.

Valve has wasted no time in reminding us that there’s still more Dota 2 to come. Patch 7.22d dropped within minutes of the end of the tournament, sending teams who will be competing in the Open Qualifiers for TI9, which begin July 3rd, scrambling to refine strats.

Good luck to all of those teams, and congratulations Vici Gaming!