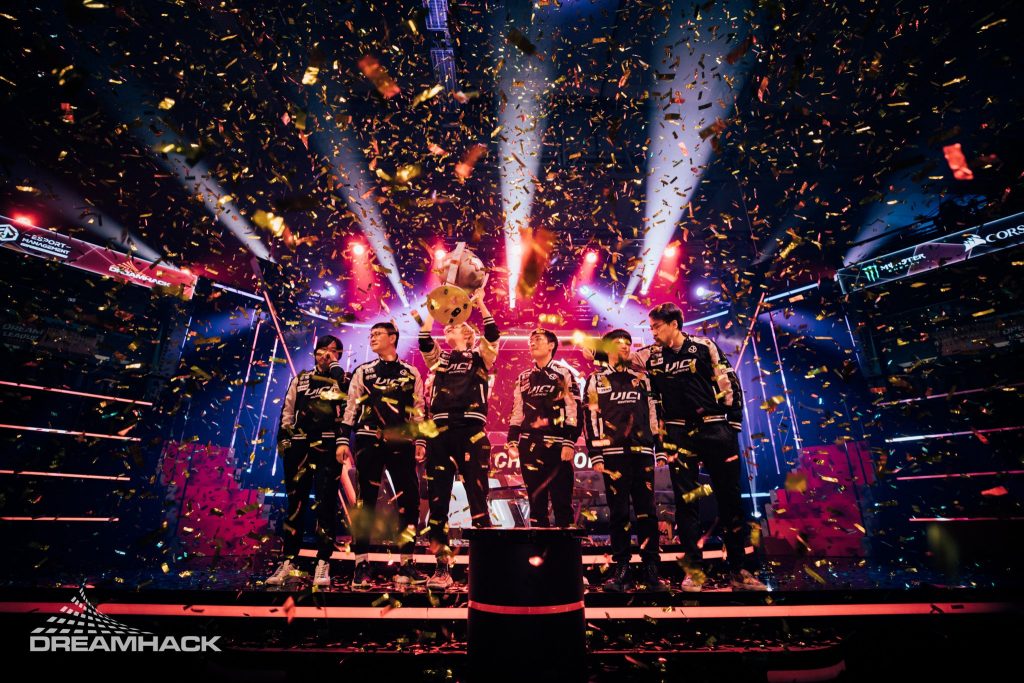 Vici Gaming took home the trophy at DreamLeague Season 11, the Stockholm Major, in stunning fashion. They dominated the StarLadder ImbaTV Dota 2 Minor and then reverse-swept their way through the Upper Bracket of the Major to face Virtus.pro in the Grand Finals.

And what a Grand Finals they were. Back-and-forth, the teams took games from each other with explosive, aggressive play. Game One was Vici Gaming’s after they won the laning phase handily. Zhang “Paparazi” Chengjun went an impressive 12/0/12 (kills/deaths/assists) on his Morphling.

Game two was all about the Antimage. It was the last picked hero in the draft, and Virtus.pro put it in the capable hands of Roman “RAMZES666” Kushnarev. With 819 last hits and an 11/1/13 record, Ramzes ran through Vici with a vengeance. The game shifted at the 25-minute mark in Virtus.pro’s favor after they successfully fended off a high ground push, exchanging only one hero for three dead on Vici’s side. Virtus.pro took the match, evening the score to 1-1.

Vici Gaming came back with their own last pick monster-hero in game three: Bloodseeker. The hero was only picked twice at DreamLeague, both times by Vici Gaming. In the hands of Zeng “Ori” Jiaoyang, Bloodseeker lived up to his name. He went 10/0/5  in a little more than 22 minutes. Virtus.pro didn’t meet Vici Gaming’s aggression, letting the Chinese squad take their second win in the Grand Finals.

Game four had Virtus.pro shaking things up with a more aggressive hero on Ramzes. He played Storm Spirit, a faster-paced hero than the Troll Warlord he played in the third game. This enabled him to get involved in the action much earlier. The hero also gave him the mobility and tools to show up and make plays happen. Virtus.pro tied the series 2-2, sending the Major to a game five.

The last game of the Major was a little anti-climactic. Vici Gaming were done playing; they turned on the pressure with a safe lane Razor and a mid Medusa and never let up. It was the shortest game of the series at 21:48. Vici Gaming took their third win of the day, going home with the trophy, the DPC points and a very happy coach.

The Vici Gaming coach, rOtK, is a legend of Dota 2. He’s played at four Internationals, always placing within the top six. His best finish was second-place at The International 4 while playing for Vici Gaming. He’s familiar to Western fans in part because he’s a rock of Chinese Dota, but also because of an emotional player profile at The International 5. He’s been coaching for nearly two years now, and there have been many jokes and comments about what an intense coach he is. Regardless, this win with Vici Gaming is the first real success he’s seen. As the casters put it, he’s finally back on top.

In the post-game-five interview, Zeng “Ori” Jiaoyang  credited their coach with their success, calling rOtK simply, “the best.” Watching him lift the trophy on behalf of Vici Gaming was an emotional moment for some fans.

DreamLeague’s playoffs retained the sense of whimsy that’s so core to the tournament series’ identity. The pre-game show featured an audience-submitted topic for the talent to discuss as had the group stage. The final day’s topic was assigning each other spirit animals. There were more musical segments at this show, with a one-man band performing multiple times, and the show’s house band rocking out.

All of the casting was on point, with Michelle “Moxxi” Song and Owen “ODPixel” Davies doing especially stellar jobs hyping up the play-by-play. Finnish player Lasse “MATUMBAMAN” Urpalainen of Team Liquid joined the last cast of the day Saturday and Sunday, providing pro player insights and a welcome laidback persona. He paired well with ODPixel on Saturday and rounded out a tri-cast that included ODPixel and Ioannis “Fogged” Loucas for the Grand Finals. Truly, the last series of the tournament is well worth watching and/or revisiting.

A recap of this season of DreamLeague would be remiss without acknowledging the incredibly high number of reverse sweeps. A reverse sweep happens when, e.g., in a best-of-three, a team loses the first game, but then wins the second and third to take the series.

Virtus.pro certainly made a habit of them. Perhaps this stood out because the CIS squad was expected to dominate? They lost their first game to every team in the group stage and playoffs except for Team Secret in the fifth round of the Lower Bracket. That series still went to three games. They also lost a series to Fnatic in the first round of the Upper Bracket, 0-2.

However, Vici Gaming also got in on the action, winning their first three Upper Bracket series with reverse sweeps. In fact, in eighteen best-of-threes that went to three games at this tournament, fourteen of them were reverse sweeps. Of course, without digging into other tournaments, it’s impossible to say how unusual this is in the grand scheme of things; perhaps they stood out because it was so unexpected for Virtus.pro to lose so many games? Still, it made for some exciting series and increased the drama for fans.

DreamLeague Season 11’s results finalized not only Vici Gaming’s invitation to The International 9 (a nice side benefit to winning) but also Evil Geniuses. They join Virtus.pro and Team Secret, with another eight invitations up for grabs. Fnatic’s third-place finish at DreamLeague moved them into fifth place, with 3450 points. Another top eight Major finish for the SEA team and they’ll be on their way to Shanghai at the end of the season.

With the series win against @NIPGaming at the #DreamleagueMajor, Evil Geniuses Dota 2 is CONFIRMED for #TI9 in Shanghai, China 🇨🇳.

There are only two more sets of DPC events this year. First up is the OGA Dota PIT Minor 2019, from April 22-28, and then the MDL Disneyland® Paris Major from May 4-12. Qualifiers for the latter are already underway, with Open Qualifiers wrapping up and Regional Qualifiers beginning shortly.