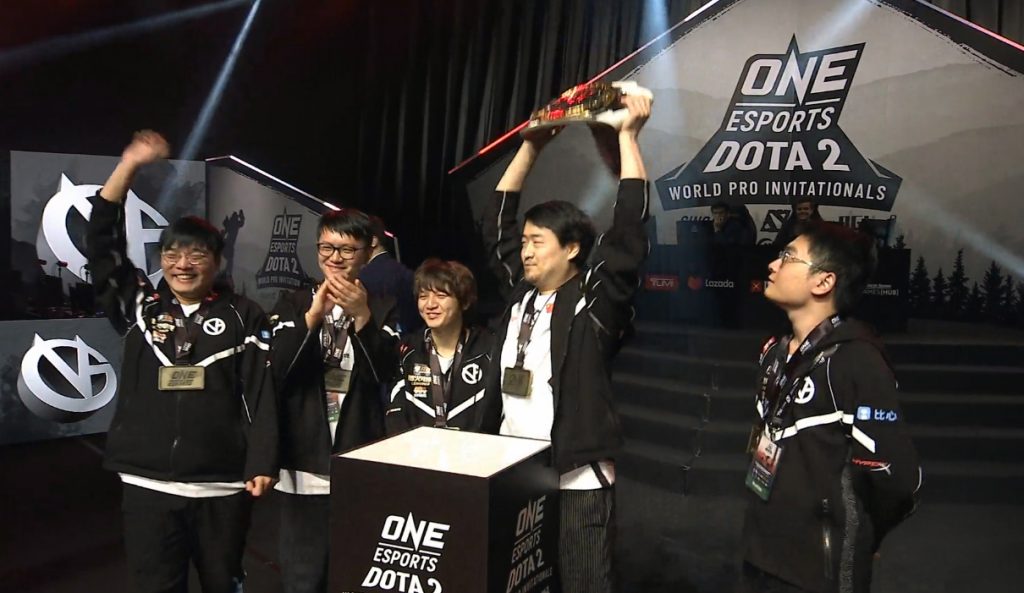 Vici Gaming has taken first place in ONE Esports Dota 2 World Pro Invitational Singapore, Dota 2’s last tournament of 2019. The Chinese team cruised to a flawless victory against Evil Geniuses in the finals after dropping just two games the entire playoffs. Their triumph comes after a disappointing group stage had left them at the bottom of the losers bracket.

At the start of the playoffs, however, you could have been forgiven for entirely counting out VG. Focus instead was locked on the upper bracket, where Alliance, Gambit, Evil Geniuses, and Team Secret were vying for supremacy. Team Secret, in particular, had a lot to prove, having missed all previous tournaments of this season. But with pride on the line, Secret would fall 0-2 to an Evil Geniuses team that has finally reached its potential. Clement “Puppey” Ivanov and company fell to the losers bracket, where they became the second victim of the surging VG squad.

The game is tight but finding key kills on Treant, Timbersaw and Shadow Demon allows us to breathe a little. Puck will fall later on. #SecretDota #ONEDota2 ⚔️

Likewise, Alliance, a team that’s been a constant competitor in recent tournaments, put on a strong performance heading into the playoffs. At every event we’ve seen this Alliance lineup at, we watch them perform incredibly well early, and the group stages of the World Pro Invitational Singapore were no exception. But unfortunately, Gambit Esports also turned a corner this event. A team that is usually firmly in the second tier of CIS Dota squads stepped up and put on one of their best performances in recent memory, as cores Kiyalbek “dream`” Tayirov, and Danil “gpk” Skutin dominated Alliance in their best of three.

This should have been no surprise to anyone who watched Gambit Gaming square off against TNC Predator in the finals of ESL One Hamburg earlier this year. But while TNC has now regressed, only obtaining an eighth-place finish in Singapore, Gambit has built on that performance to become a squad we’ll no doubt see a lot next year, especially in the far ends of the bracket. Alliance meanwhile fell to the loser’s portion of the tournament, only managing to scrape by Virtus.pro before being dispatched by the merciless Vici Gaming.

With Gambit and EG both sweeping their opponents, it would have been reasonable to expect a drawn-out series in the Upper Bracket finals. But the talent difference was apparent in this two-game matchup. We’ve long known that the current EG roster, with its longtime core of Artour “Arteezy” Babaev and Andreas Franck “Cr1t-” Nielsen, had the potential to a tournament winning team. But for the past year, we’ve had to watch as EG fell short of a win in almost every event they’ve attended. Nothing immediately changed after the departure of Syed Sumail “SumaiL” Hassan and Gustav “s4” Magnusson, but finally, everything seems to be clicking.

The team dismantled Gambit in a performance that showcased both “Abed” Azel L. Yusop’s raw carry potential on Razor and Shadow Fiend, and Roman “RAMZES666” Kushnarev’s reliable play in the three position. Despite noble attempts from Artsiom “fng” Barshak to rally his team, Gambit fell to the losers bracket to face Vici Gaming.

We dominate the Upper Bracket Final, securing a clinical 2-0 against @GambitEsports!

After a well-earned day off tomorrow, we'll take the stage to play for the Grand Prize on Sunday Evening local time!
#LIVEEVIL #ONEDota2 pic.twitter.com/AGJnU3wJiH

Gambit never really caught their footing in the games against VG. In the first match, it was over before it even started. VG’s Templar Assassin snowballed out of control, while their opponents had no answer for a roaming Omniknight. In game two, Gambit held on for dear life. But it was hard to tell whether the length of the game was because of Gambit’s perseverance, or VG’s reluctance to pull the trigger. With a composition built around Night Stalker, the team held off on objectives, waiting for their carry’s ultimate to engage. Ultimately this led to a 50-minute match that wasn’t ever out of hand for VG. In a post-game interview, gpk cited his team’s average level of preparation. A lack of scouting and analysis of VG’s picks allowed the Chinese squad to sweep their way to the finals, with picks they’ve relied on for many months now.

All the scouting in the world, however, wouldn’t have saved Evil Geniuses as the squad came up against an incredibly strong-looking Vici Gaming in the finals. Game one and two felt virtually identical, although picks swapped between the two teams. With Zeng “Ori” Jiaoyang’s Viper taking control in both games, there was little for EG to do, but attempt to play around their opponents. This was impossible, though, with VG’s other carries more than able to clean up EG.

In the decider, VG put on a masterclass of patient Dota gameplay. Despite losing every lane, and giving up an early lead, Vici Gaming controlled vision, played safe, and ramped up with their Slark pick. Even if they did find themselves getting caught a few times.

The picture-perfect Chronosphere setup from @Arteezy allows us to take a crucial fight! #LIVEEVIL https://t.co/4qLEwjnd6Y pic.twitter.com/waqkwA7JJd

But after farming up and taking the lead, Zhang “Paparazi灬” Chengjun exploded with a plethora of kills. And although it took slightly longer than expected, VG was able to push into EG’s high ground in just under 50 minutes and end the series.

Vici Gaming pulled off a masterful performance in this tournament. After looking positively miserable in groups, they flew through the lower bracket undefeated on their way to 3-0 sweep of the finals. They’re rightfully the champions of the ONE Esports Dota 2 World Pro Invitational Singapore and are taking home a welcome Christmas gift of $200,000 for their trouble.

It’s also worth remembering this was the first tournament held on the transformative 7.23 patch. In the new year, every team will have had plenty of time to practice and familiarise themselves with the meta picks. Some teams faltered in the group stages because of a lack of patch understanding. Then in the playoffs, some failed to adapt to their opponent’s picks.

But ultimately, as much as Dota 2 changes, some things never do. Many of the picks from this tournament were no different than the ones we saw at the first Major in Chengdu. Picks like Shadowfiend, and assassins like Morphling, TA, and of course, Night Stalker, will always be reliable picks for teams looking to crush face. And no new Aghanim’s Scepter interactions will change that.