Vancouver Titans’ Slime on Mentality and the Meta 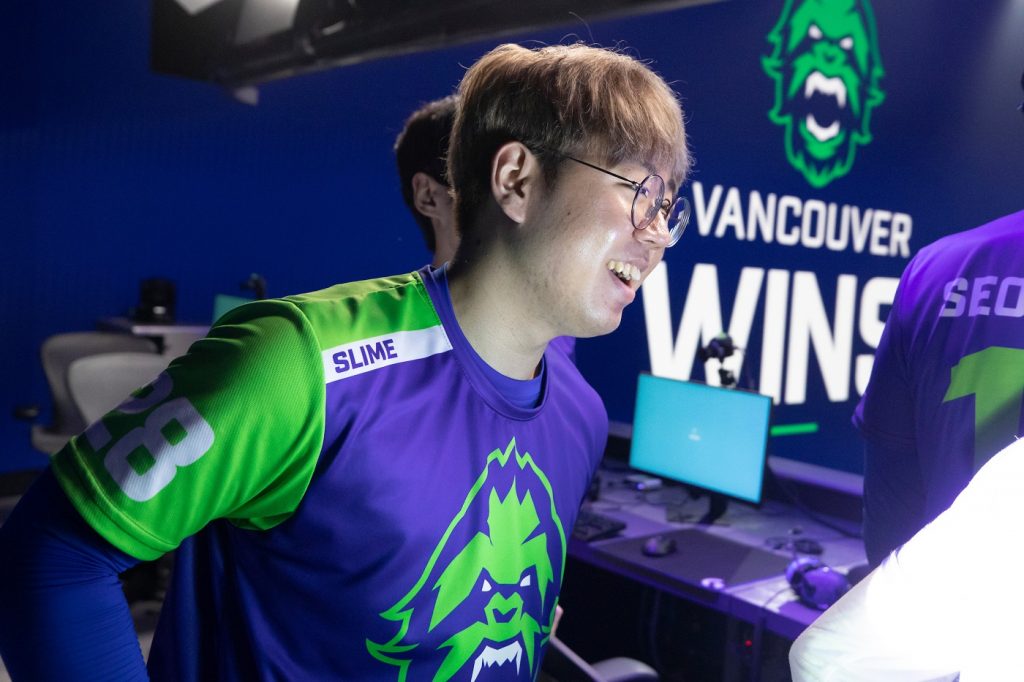 After sending the Los Angeles Gladiators down to the Losers’ Bracket, the Vancouver Titans knew the only thing between them and the Overwatch League Grand Finals was either the New York Excelsior or the Atlanta Reign. Titans’ Sung-jun “SLIME” Kim’s preference of opponent? The main support shared with Hotspawn he had no preference and was not scared of any team.

SLIME’s confidence in his team proved to be well-founded as the Vancouver Titans defeated the New York Excelsior 4-3 in a battle for the first spot in the Grand Finals. Whether or not Vancouver faces the San Francisco Shock, New York Excelsior or Hangzhou Spark, one thing is certain. The Titans’ main support will continue to strive for excellence, provide for his teammates, and give Overwatch League fans a performance to remember.

Congratulations on making it into the Winners’ Finals! How much of an advantage is it to not drop down to the Losers’ Bracket?

So if you go to the Lower Bracket, the schedule is a lot more chaotic and you have all of this pressure in the back of your head, where you’re thinking “if I lose, I’m going to go home.”

With the Losers’ Bracket seeing the emotional departure of the Seoul Dynasty and the London Spitfire, does this provide additional drive to stay in the Winners’ Bracket?

When I watched [those series], it’s especially unfortunate because I know a lot of those players. I felt bad. At the same time, I got more motivation to play even better in this tournament.

You’ve had so much experience in high stakes tournaments. How do you stay in control in such important situations?

At first when I played, I got over-excited sometimes. But now, my character is usually calm and chill. It helps me to control my emotions when I play.

With Tizi now on the starting roster, how has that impacted overall team synergy in this new meta?

We’ve played with Tizi a long time ago in Runaway, so we had experience and friendship, it was easy to adapt to each other’s playstyle.

We’ve seen Lucio being picked more frequently than in the 2-2-2 meta we saw in Stage 4. Why is Lucio such an important healer in the Sigma meta?

In any meta, it is important for a healer to stay alive, keep healing, and try to get their ult as fast as you can. If you think about that, Lucio is one of those healers where all of those three work for him.

This meta has seen the rise of DPS heroes such as Reaper, Doomfist, and Pharah. How does this impact your gameplay?

The current meta is really hard, a difficult meta for supports. You need to make sure you don’t die, and that your ultimate doesn’t get canceled. There’s a lot of things to think about. When you would play Lucio against a Widow, you would tend to just stay grouped with your teammates and use structures as shields. But against Doomfist, if you’re in a group you get one-shot. It helps to ride on the walls or be on high ground.

Is there anything you would like to tell your fans who are cheering you on through playoffs?

There’s only one game left to go to the Finals. I’m going to try my best so we can get there. We will go for the win.

The Vancouver Titans did win versus the New York Excelsior on Friday, September 13. They will aim for victory once again at the Wells Fargo Center in Philadelphia on September 29.