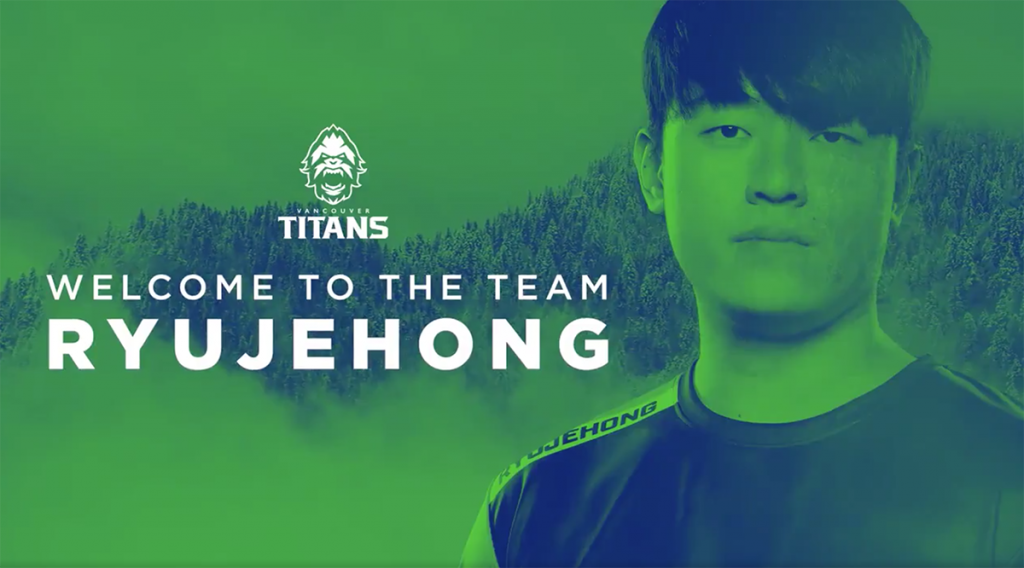 The Vancouver Titans have made a handful of roster moves as of late after a relatively quiet offseason. One of their biggest roster changes includes releasing both of their main tanks in Jang-hyeon “TiZi” Hwang and Sang-beom “Bumper” Park in favor of the talented – but controversial – Chan-hyung “Fissure” Baek. The Titans made news once again after announcing their acquisition of the legendary Jehong “ryujehong” Ryu.

We are very excited to welcome the man, the myth, the legend, @ryujehongsexy to the Vancouver Titans!#ForceOfNature pic.twitter.com/ovRXRaERVW

Former Seoul flex support, ryujehong spent the first two years of the Overwatch League with the Dynasty before joining the Vancouver Titans. He is a legendary player in the professional Overwatch scene before the Overwatch League even started where he dominated Korean Overwatch as part of the incredible Lunatic Hai team.

Lunatic Hai would go on to become most of the Seoul Dynasty roster when the league began and were expected to be one of the best teams in the league (and early favorites to win it all). Unfortunately, the Dynasty never lived up to expectations in 2018 and failed to make the season playoffs. They fared a little better in 2019 but looked average for most of the year. Change was inevitable for the Dynasty which included parting ways with Jehong, a staple of professional Overwatch since its inception and one of the most influential flex support players of all time.

Joining the Vancouver Titans is an intriguing move for ryujehong considering they already boast arguably the best flex support player in Jooseok “Twilight” Lee – MVP finalist in 2019. Whether he receives playing time or was brought on as a popular, well-liked player to boost fan ratings, it’s unclear the role Jehong will play on the team in 2020.

The Vancouver Titans were the best team in the Overwatch League for most of the 2019 season. They went on a league record 19-win streak before their first defeat and finished the season with the best record in the league at 25-3. The Titans fell short at the Grand Finals, though, where they lost to the San Francisco Shock. Vancouver’s success was largely attributed to their team synergy as most of their players have played together for the past couple of years.

With Bumper leaving while Fissure and ryujehong join the roster, the team synergy built up won’t be as integral in 2020. Still, ryujehong is a legend of this game and one adored by fans around the world. It’s nice to see him find a roster spot going into the next season.