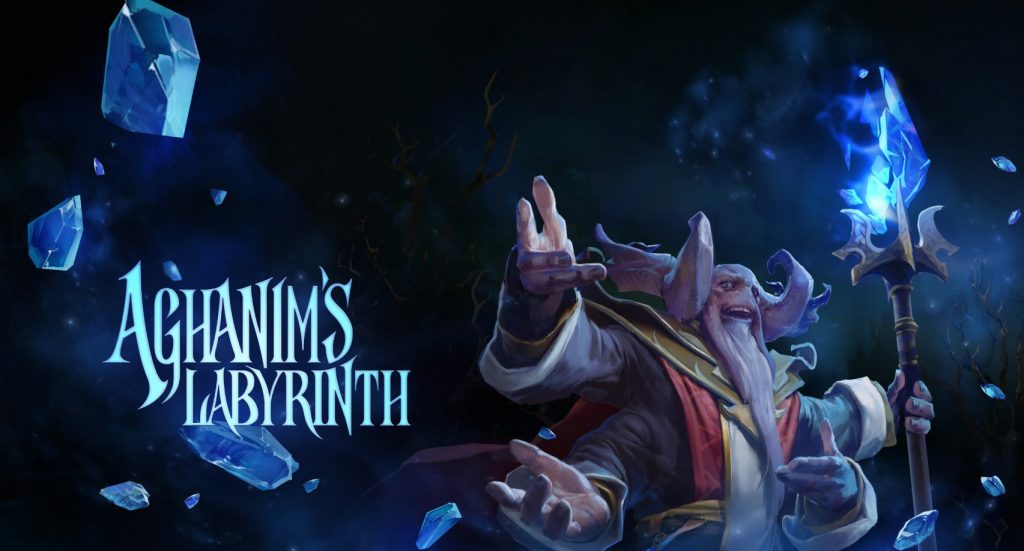 The Summer Event for the The International 10 Battle Pass, Aghanim’s Labyrinth, has been officially revealed and launched. Aghanim’s Labyrinth is a large-scale four-player randomized dungeon crawler where players go up against monsters from “countless dimensions”, before challenging Aghanim, the Apex Mage himself.

Aghanim, although not a playable character in the Dota universe, is entwined in its lore, and the mighty wizard’s Aghanim Sceptre is a high-tier item in the game. This is the first time the character makes an appearance outside of mentions in hero voice lines.

In Aghanim’s Labyrinth, players complete randomized rooms collecting Aghanim Sceptre Shards. These shards can be spent on augmenting your heroes’ abilities. Completing the Labyrinth will improve your Ascension Level, giving you access to more powerful buffs and skills. There are four Ascension Levels; Apprentice, Magician, Sorcerer and Grand Magus. Any upgrades unlocked are permanently available to you for future attempts, allowing you to become increasingly deadly the more times you play.

Shards can be spent on a Skill Tree which scales depending on your Ascension Level. (Photo courtesy Valve)

Despite the dungeons being randomized your party will have a choice of which standard challenge to face by channeling an Outpost. Challenging a Red Outpost will trigger an Elite Boss encounter which “Pose a greater risk but yield equally greater rewards”.

Each run of Aghanim’s Labyrinth ends when all players run out of lives, but bear in mind fallen allies will respawn if an encounter is completed.

The Labyrinth is available to all Dota 2 players and does not require a Battle Pass. However, owning a Battle Pass will allow you to unlock up to 2,000 Battle Points per week through the event.

On top of a brand new summer event, a global leaderboard will launch on July 21st, allowing players to compete on the same randomly generated labyrinth. The fastest and most successful parties will be rewarded, with random Arcanas, Baby Roshan and Kunkka shoes up for grabs depending on where you place.

You can attempt the Aghanim’s Trials as many times as you wish during your own two hour window, and you can either party up with friends or use match-making. Aghanim’s Trials will run every Sunday until the Battle Pass ends on September 19th.