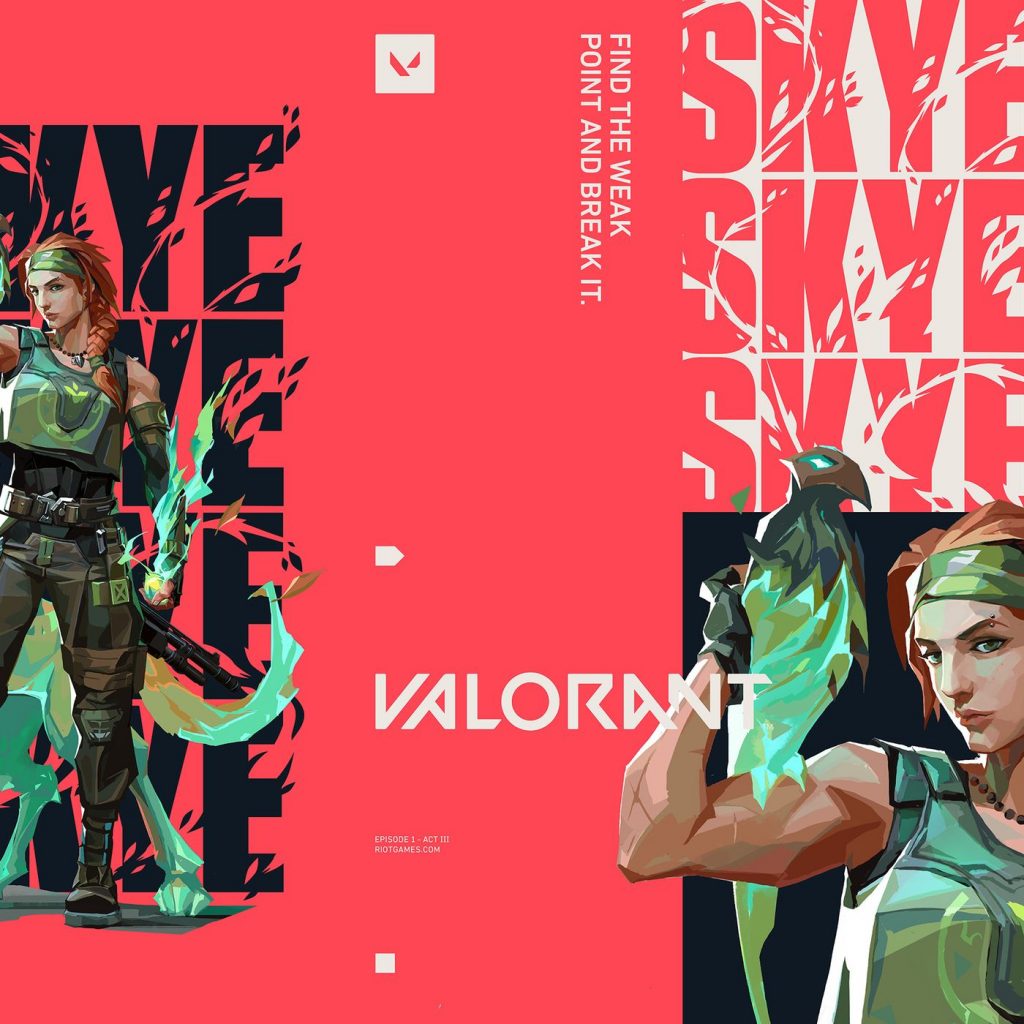 VALORANT Patch 1.11 adds Skye to all game modes, updates the abilities for Initiators Sentinels, and adjusts the in-game economy, which will affect the decision-making of teams. Icebox is also now in the competitive map rotation for players to try the new map in a competitive environment.

This patch Skye enters the fray, Initiators and most Sentinel Agents get balanced, and the Economy ruleset is tuned. And those are just the highlights.

Skye, the newest Agent in VALORANT,  is now available in all regular modes and will be available in official esports competition such as First Strike, the first official tournament hosted by Riot Games, on November 9th. This is subject to change if any issues are discovered with Skye within the next two weeks.

Several other Agents were balanced to make them better at their assigned roles, such as making Initiators more effective at breaking through defenders, which was previously very difficult.

Flashes have been adjusted to fade out slower at the start but will remain active for the same amount of time. This allows Initiators to create a “concentrated window of extremely high threat to help their teams break onto sites.”

Breach’s full flash time has also increased from 1.75 to 2 seconds, which adds a slightly more extended period for teams to take advantage of a blinded enemy. This, combined with the fade-out changes to flashes, should help attackers when taking sites and pushing enemy players.

Sentinels also received a significant update in Patch 1.11 as their abilities will now be disabled with the deployer dies. For example, Cypher’s Trapwire will no longer be active if the character dies. This change is meant to “increase the depth of decision making when playing Sentinels” and allow enemies to have more counterplay against these abilities.

Cypher’s Trapwire and Spy Camera are now disabled and revealed upon death, which will prevent players from running into the hidden traps without warning. This should make it slightly easier for players to capitalize on eliminating Cypher players early in rounds.

Killjoy also received significant updates in Patch 1.11, which reduce her recon abilities but increase her ability to stall on a site. Killjoy must now be within 40m for her Turret and Alarmbot to remain active, which means she cannot deploy her devices and move to another site. The abilities will reactivate when she renters the range, but this eliminates the ability for the Turret or Alarmbot to act as a recon device from a long distance.

Killjoy’s Nanoswarm ability can now only be detected from 3.5m instead of 5m, and the damage has increased from 40/s to 45/s. The damage also now ticks smoother and faster in the Nanoswarm instead of in chunks of 10 every ¼ of a second.

These changes should reduce Killjoy’s ability to use her gadgets strictly for intel gathering and maintain her effectiveness at holding a single site.

Killjoy’s Aimbot, Cypher’s Trapwires, and Skye’s Heal abilities have also been adjusted in the latest patch. These abilities previously carried over into the next round if players recalled the abilities before the round finished, but they will now need to be repurchased. Players will need to be more strategic with their purchases and make sure to use their abilities wisely.

Icebox is now available in the competitive map rotation and will be available in official esports competition on November 29th. This is also subject to change if any issues are discovered before-hand.

High-ranked players can now expect shorter unrated que times, and players will now see the current game pod’s status on the loading screen for all modes. The Combat score will also now factor in non-damaging assists on enemies.

The in-game economy has been adjusted to “increase richness in decision making” when deciding to save or force for a round win. These changes will also allow teams to lower the enemy’s economy if they choose to save for expensive weapons on a round loss. The economy changes are as follows:

Several minor updates to improve the overall VALORANT experience have also been introduced in Patch 1.11. One of the most notable additions is a left-handed view model, which can be turned on in the settings menu. This will also show all other players as left-handed when spectating.

Riot has fixed one source of the widespread combat hitches and is investigating the other causes for hitches affecting the player base. Patch 1.11 should resolve most players’ issues, and Riot has promised to work on fixing other causes of the problem.

A full list of the other changes and bug fixes can be found in the official patch notes. Patch 1.11 was rolled back after several bugs and issues were introduced. The sudden changes also impacted professional players competing in the First Strike qualifiers, so Riot removed the patch to avoid any further issues.

Patch 1.11 will be reintroduced at 10 a.m. CST on Monday, November 2nd. The Americas will receive the patch first, and then it will be rolled out to other regions. This delayed schedule should not impact further patches, and fans can expect a smaller patch later in the week. Skye will be available immediately as the patch is released, and players can continue to earn XP to unlock the character or purchase her with VALORANT Points.