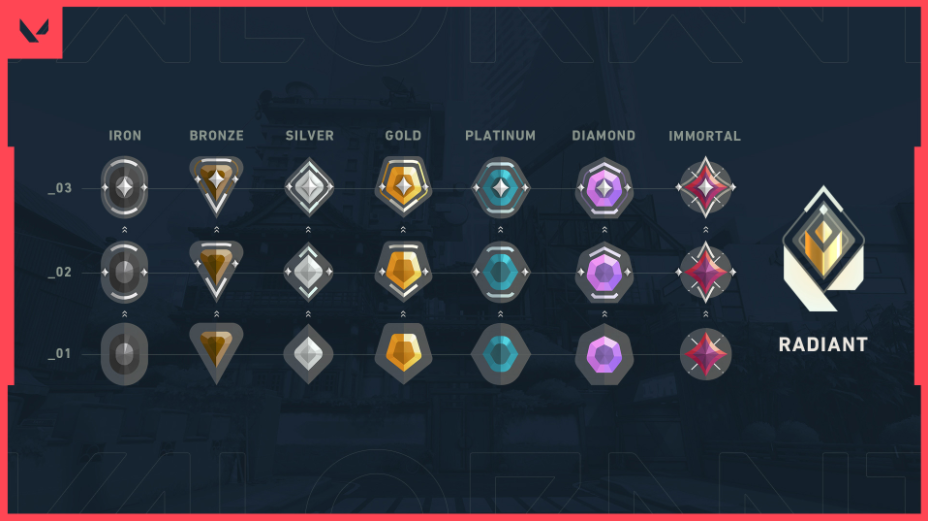 The wait for a Competitive Mode is almost over. (Photo courtesy Riot Games)

VALORANT players have a lot of new content to enjoy in patch 1.02. The Competitive Mode will finally be available to players with a new name for the highest rank, and several Agents have received minor updates. Players can also expect to see a few map changes and menu updates.

Patch Notes 1.02 are here with a fresh Menu UI, surrender option, and balance for Viper, Jett, and Reyna. Competitive won't be on with the patch ship and will be coming later. Read all about it: https://t.co/VZxSAktY7t pic.twitter.com/TD7Kd0bm8t

VALORANT players have been waiting for a more competitive experience since the game’s release. The wait is finally over as the Competitive Mode will be released a few hours after patch 1.02 goes live.

Competitive Mode will feature updated rank icons and a new name for the highest rank: Radiant. Riot Games decided to change the highest rank from Valorant to Radiant to avoid confusion between the game and the competitive rank.

Riot has also optimized the skill disparity range which allows players to play with friends at different levels to a certain extent. Matchmaking will continue to be optimized to ensure players are put into fair matches regardless of their party size.

VALORANT players can also choose to surrender a match before its completion in the latest update.

Players leaving early or walking away from their computer during a match is a major problem in VALORANT. The team can now choose to surrender if needed through a vote system. All present players must vote yes for the surrender to occur, and each team can only vote to surrender once per half.

The winning team will receive credit for the remaining rounds needed for a victory at the time of the surrender, and the losing team receives loss credit.

Several Agents received minor updates in the latest patch which make them more viable or balanced.

Viper’s Toxic Screen will now burn through walls which makes it a more viable option for cutting off lines of sight and parts of the map.

Viper’s Snake Bite ability now causes players to receive the Fragile debuff for a short period after walking through the poisonous smoke. Fragile increases the damage taken while the effect is active and is designed to punish players pushing through the smoke.

Viper’s Poisonous Orb also received a one second cooldown increase to prevent players from spamming the ability but still keeping it viable.

Cypher’s Spycam will no longer block a Spike defusal, and players can no longer place a Cyber Cage on his Trapwire. The Spycam can also not go through the teleporter doors on Bind in the latest update.

Each map also received minor updates to make clearing angles in specific areas easier. Players have complained about the numerous locations where abilities are needed to push through safely and how they slow down attacks.  Riot explained the changes are meant to reduce the amount these deep angles and how players will only have to worry about important locations:

“The intention is that angles that are more difficult to clear are most commonly found in areas meant to reinforce existing territory control. This is to emphasize ability usage and teamwork in order to reliably gain control of these locations.”

Several performance updates were introduced in the latest patch which will help framerate issues in certain situations.

Players can find a full list of these updates and changes in the 1.02 Patch Notes.

Patch 1.02 is now live, so players can experience the latest updates and can expect the Competitive Mode to be available soon.