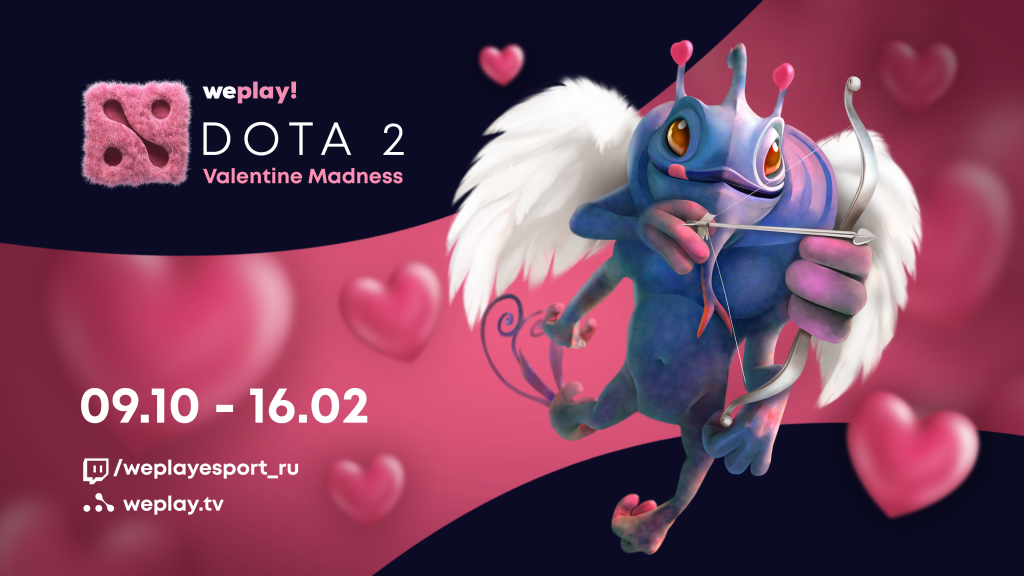 WePlay! aims Cupid’s bow at Dota 2 fans this week with their Valentine Madness tournament. How well will romance and Dota 2 mix?

Valentine Madness will fill the entire week, including Valentine’s Day, with the Grand Final scheduled for February 16. Twelve teams are competing in the event for a prize pool of $100,000 USD. The teams are from the Europe and CIS regions, and some will also be competing in the Regional Qualifiers (RQs) for the StarLadder ImbaTV Dota 2 Minor. The overlap for CIS teams will only be on day one, February 10, while European teams Vega Squadron, Alliance and The ReaL Deal could face some scheduling problems on February 11 and 12.

The tournament has seeded the twelve teams into a double elimination bracket. Eight of the teams will compete in Round 1, with the winners advancing to face one of an additional four teams in the Quarterfinals. The teams that got a free pass include Natus Vincere, Alliance, Ninjas in Pyjamas (NiP) and Gambit Esports. NiP and Natus Vincere qualified for the DreamLeague Season 11 Major, while the other two will be competing for their spot at the Minor. Gambit won WePlay’s Winter Madness tournament in December, can they defend their title or will one of these teams snatch it from them?

Let’s take a quick look at those first round match-ups!

Vega Squadron vs The Final Tribe

These teams have met three times at qualifiers for Dota 2 Pro Circuit (DPC) events over the last three months. Most recently, Vega eliminated TFT from the lower bracket of the Bucharest Minor qualifier in a 2-1 series. The Final Tribe struggled in Open Qualifiers for the most recent round of DPC events.

Both teams have undergone recent roster changes, but it seems Vega Squadron may have come out of those in a stronger position.

The ReaL DeaL vs Team Empire

The ReaL DeaL is a new stack that competed in the Europe Qualifier for the DreamLeague Major. Featuring Steve “Xcalibur” Ye, Jure “Pingvincek” Plešej, Maxim “Schachlo” Abramovskikh, Jerry “EGM” Lundkvist and Yaroslav “Miposhka” Naidenov, the squad put in a good showing though they came short of claiming a spot at the Major.

Miposhka came from the Team Empire: Faith squad, which is now known as Team Empire. The organization’s secondary squad was dissolved, and MIposhka was dropped to make space for another player on the final team. Unfortunately for Team Empire, they’ve foundered in Open Qualifiers of late.

Winstrike Team and Pavaga Gaming have not met competitively before (at least, not that we could find), so anything goes! Winstrike placed 9-12th at The International 2018, but haven’t experienced success since, facing tougher competition in the CIS region as teams like Gambit Esports and Natus Vincere (not to mention juggernaut Virtus.pro) have proven quite strong within the region in the second DPC season.

Meanwhile, Pavaga was formed in October in this year. They recently won the LOOT.BET Winter Masters, beating Alliance 3-2, but the squad hasn’t made it to the DPC yet.

The Pango vs Old But Gold

The Pango, formerly NoPangolier, made it through to the Chongqing Major, making them the most DPC-decorated of the first round teams. They were most recently knocked out of the DreamLeague Major CIS Qualifier by Natus Vincere in a 2-1 series, and before that were knocked out of the ESL One Mumbai Qualifier by Gambit Esports. That’s the team they’ll have to face if they make it through Old But Gold.

Old but Gold are a Russian stack featuring Ilya “Illidan” Pivcaev, Sergey Alexandrovich “G” Bragin, Stanislav “633” Glushan, Ivan “VANSKOR” Skorokhod and Fedor “velheor” Rusikhin. This squad recently came up against Natus Vincere and Gambit Esports in the CIS Qualifier for DreamLeague and were beaten 0-2. With such similar recent results for the two teams, the series between The Pango and Old But Gold could be quite close.

WePlay! has brought in five familiar Dota 2 casters-—Owen “ODPixel” Davies, Jorien “Sheever” van der Heijden, Nick “BreakyCPK” Caras, Kyle Freedman and Kevin “Purge” Godec—with Roberto “RobAJG” Gonzales to host the event. Based on past WePlay events, expect the set to embrace the Valentine’s Day theme. Red and pink and hearts are obvious choices, but expect some surprises! In the past, the organizers have also made a point of providing plenty of pre-filmed filler content and of providing talent with some costume pieces. Let’s hope they tread carefully with this one because we all know what a minefield romance and love can be.

Hopefully, our biggest disappointment will be that Io and its heart-spewing arcana are out of Captain’s Mode just in time for this event! What hero could possibly be more appropriate?