V1per: “It’s Definitely Nice to Have a New Environment” 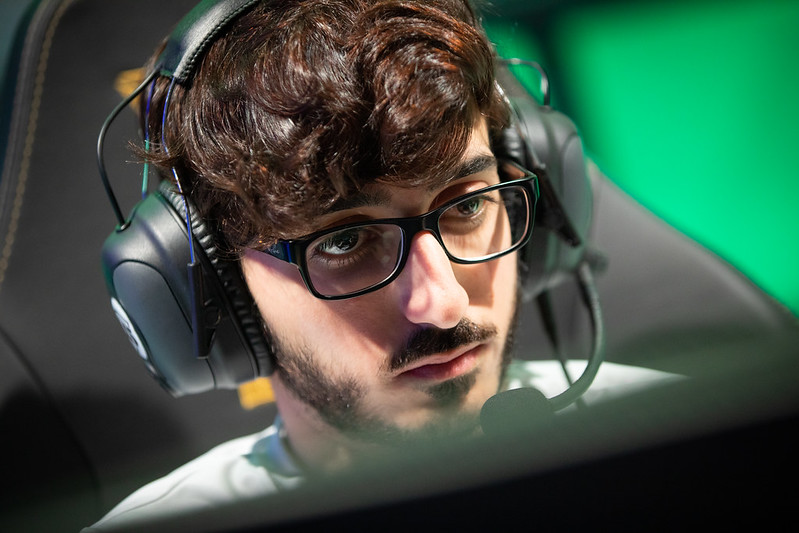 After his season was cut short on FlyQuest, V1per spent his offseason focusing on becoming a more well-rounded player. (Photo courtesy Riot Games)

Omran “V1per” Shoura’s career has been a solo queue success story for the ages. After his talent got him recognized by Team Liquid, he made his big break in the League of Legends Championship Series as a starter with FlyQuest in 2019. Heading into the 2020 Summer Split, he’ll be starting in the top lane for Team Dignitas.

V1per’s year so far has been bittersweet. Despite being a major part of FLY’s regular season success, he was subbed out for Colin “Solo” Earnest during playoffs. Hotspawn sat down to speak with V1per about his feelings about spring, his personal growth, and how he’s getting along with his new teammates.

Hotspawn: How’s your offseason been?

V1per: Honestly, just playing a lot of solo queue, getting my champ pool ready, trying to be as flexible as I can going into this upcoming split. Just working on myself, working on my consistency pretty much.

Hotspawn: That’s interesting you say flexible because you were a Riven one trick when you came in, but you were super vocal about your goal to just diversify your playstyle and prove that you’re not just this guy who can only play Riven or carries. Do you think that goal’s the same or has it developed into something different?

V1per: The goal is the same I’d say. I feel like people think of me right now and they’re like “if he gets Riven, he will pop off.” I get other champs and I don’t think people can say the same. So I still wanna aim for that; that’s the main goal. It’s just about getting there, and I’ve been struggling to get there, I guess. But the confidence is getting there slowly because I know I can do that really easily. It’s like, I’m doing that in scrims, why can’t I do it on stage, and that’s what I’m working on.

It was just really unfortunate that I wasn’t as consistent as Solo on stage.

Hotspawn: So near the end of Spring playoffs you were subbed out for Solo on FLY. Do you think it was an issue of just not being able to quite replicate scrim performance, or was it a team synergy thing?

V1per: Yeah, it’s 100% because I couldn’t do what I was doing in scrims on stage. We went into playoffs on FlyQuest, I was scrimming a lot, we were winning a lot in scrims, that’s why I was a starter in the first place. It was just really unfortunate that I wasn’t as consistent as Solo on stage. He was a stable player which is what we wanted back then. It was only fair, y’know? So that’s why I stepped out early and started working on myself and trying to figure out what this problem is and what’s going on and that’s what I’m using this offseason for.

Hotspawn: Well, you are on DIG now. How have you been getting along with your new teammates?

V1per: I like all my teammates honestly, I’ve played with all nine of them. I’m just getting along with all of them. They’re all motivated, I can feel a lot of motivation. They’re all just nice to play with, so it’s definitely nice to have a new environment.

Hotspawn: I actually have a question for you about that. So normally you move into a new team, you’re going into the gaming house or new apartment, and you do a bunch of bonding stuff like. Obviously with COVID-19 that’s a bit more complicated and you can’t do all those things. Have you been bonding with them in different ways?

V1per: Yeah so I live with [Johnson “Johnsun” Nguyen], [Juan “JayJ” Guibert], and we’ve got [Toàn “Asta” Trần] coming up soon. It was just me, Johnsun, and [Kim “Olleh” Joo-sung] at the time. It was definitely pretty nice because I knew both of them from before. So it’s nice to not quarantine alone and just talk with the teammates after scrims, just figure out what the problem is, just call them out on anything. Nothing’s being held back, y’know? They’re all just easy to talk to.

Hotspawn: Have you been playing games or anything like that to build synergy outside of the game with the teammates you don’t live with? Has Dignitas been facilitating activities like that to make sure you’re at least getting to interact with them if you can’t see them as regularly?

V1per: We do team activities once a week to do that. I’m usually really close with all my teammates. I type to them a lot, figure out what our problem is, figure out how we can fix it. Just get close to them, y’know? I feel like there’s no reason not to. If we just don’t talk to each other at all and go into scrims as “employees”, I’m not a fan of that. I just wanna be close to my teammates and work together to become the best.

Hotspawn: Lastly, your younger brother [Moaz “General Sniper” Shoura] is pretty popular on the solo queue ladder and a lot of people talk about him. Do you think he has what it takes to become pro? Is he maybe better than some Academy players right now?

V1per: I think on specific champions, yes, he’s better than some Academy players and some LCS players, even. He knows a lot of macro as well.  He knows stuff you need to know as a pro player, but he’s not capable of being a pro yet just because of his champ pool. But if there was no champ pool issue, he could easily become a pro at his age if it was allowed. I think amateur teams are gonna start looking at picking him up very soon once he picks up a few more champs.

V1per will start this summer for Team Dignitas in the top lane. Dignitas plays Golden Guardians on June 13th at 4 p.m. PDT.