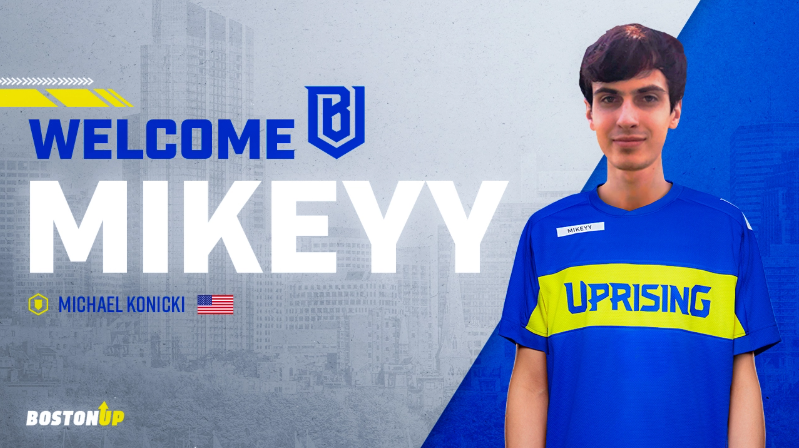 The Boston Uprising announced on Thursday that they have signed American main tank player, Michael “mikeyy” Konicki. With the addition of Mikeyy, the Boston Uprising finally have seven active players on their roster, which is the current minimum for the Overwatch League (OWL) under the recently revised roster construction rules.

Mikkey hails from Stonington, CT and has competed in the North American Contenders scene over the past year. He most recently played with the Skyfoxes and Noble, but he possesses a surprising lack of professional Overwatch experience.

The President of Gaming for the Uprising, Chris “HuK” Loranger, said: “Though Mikeyy hasn’t been in the Overwatch Contenders scene for very long, we like what we’ve seen from him in that short amount of time. We’re also happy to add a New England local to the team and hope our fans will root for this hometown player.”

The Uprising have struggled to retain a strong roster throughout season 3. They have lost a number of players over the past few months. The list of players to leave includes:

As a result of the constant departures, Boston has been forced to scramble just to meet the minimum roster size. Boston acquired Leyton “Punk” Gilchrist last week to replace Brussen as their starting flex-tank. Punk looked really strong in week 15, helping lead Boston to defeat the L.A. Gladiators, which was their first victory since week 3. The addition of Mikkey to the Uprising roster should also be helpful, especially while Axxiom is absent from OWL competition.

Boston is the 11th seed in this weekend’s NA May Melee Tournament. The Uprising’s next match will be played on Friday during the knockout rounds of the NA May Melee tournament.