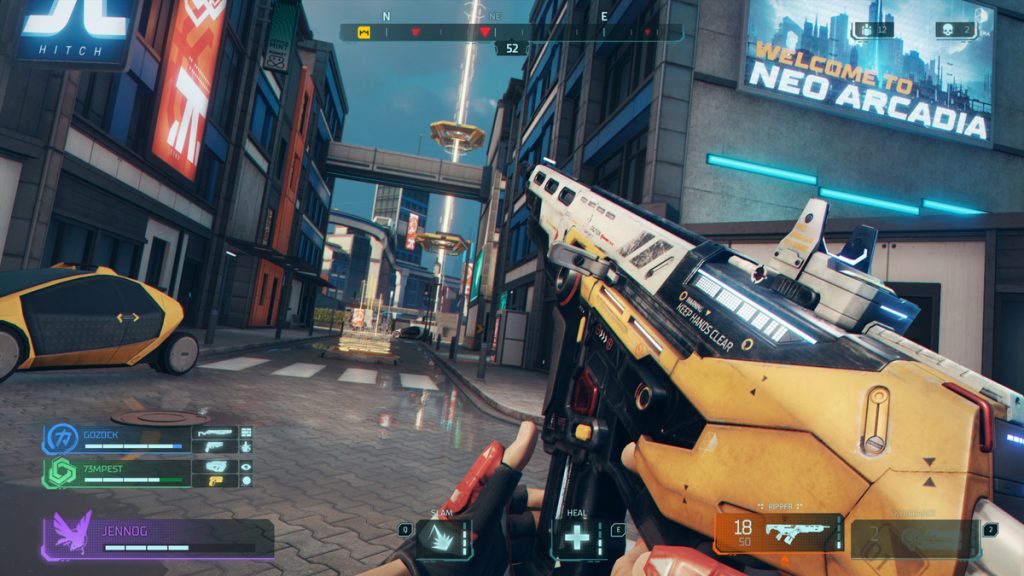 Ubisoft has revealed their newest game, Hyper Scape, a new Battle Royale with 100 player servers and a community focus. This free-to-play is out now in closed beta and available in North America and Europe.

Welcome to #HyperScape, an all-new urban battle royale set in the virtual city of Neo Arcadia. Do you have what it takes to be a champion of Crown Rush? pic.twitter.com/Xe4oPIsnRU

Hyper Scape is described as a more casual themed Battle Royale. The game features community-focused events, voted on by things like Twitch Chat. Viewers can vote on things like infinite ammo, low gravity and more. This aims to add a bit more of a fun casual spin onto things that other Battle Royales do not do.

As for the game itself, it operates a little differently. There are no set classes or characters like Realm Royale or Apex Legends. Instead, the game offers power-ups, known as hacks. These hacks give players the ability to set up an attack, defense or movements based skills. These abilities are Mines, seeking out enemies, spawning a big wall, turning into a ball or going invisible. There are many more abilities to find throughout the game.

Where other BR’s use a ring to close out the map, Hyper Scape uses sectors that begin to decay. Players will see parts of the map start to decay until the part of the map disappears. Players are forced to move; otherwise, they will fall into cyberspace and die.

Speaking of dying, Hyper Scape revives work differently. When a player dies, they turn into an echo. If your team finds a kill, then a respawn pad spawns on the opponent’s body. Echoes can spawn back into the game by moving onto these pads.

Even the winning condition is a little different. The usual last team standing is one such condition, but there is a crown to collect. Teams can win by collecting a crown that spawns in the final sector. Teams win when they have held onto the crown for 45 seconds.

Weapons are also getting a new look in Hyper Scape. There are nine weapons currently in the game, and they can all fuse. Weapons can fuse with other weapons to upgrade damage, cooldown reduction and more.