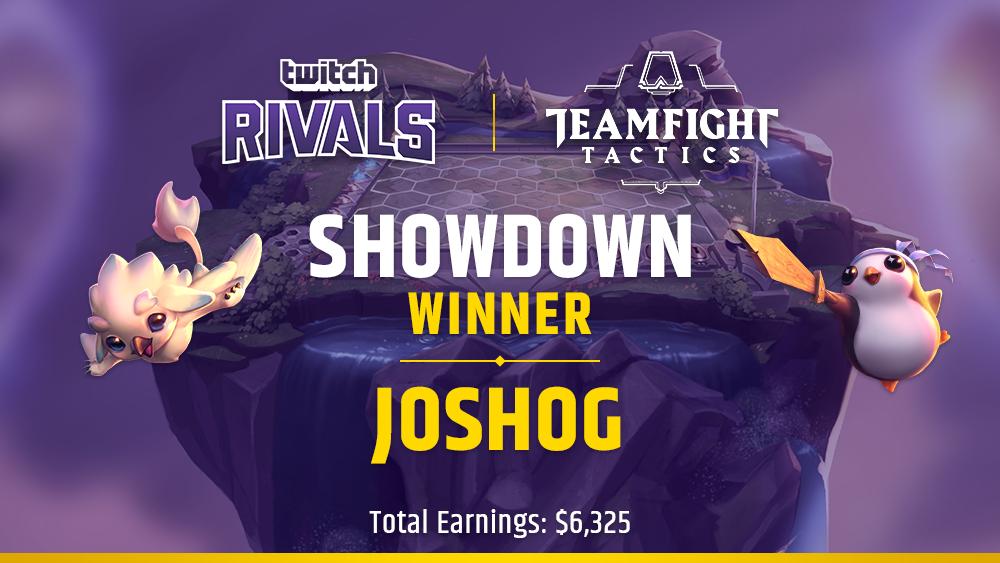 On day two of the Twitch Rivals Teamfight Tactics (TFT) Showdown, just 16 players remained. 64 streamers had been whittled down on day one to these top performers. After several rounds of day two matches, and a very tense grand final, Josh “JoshOG” Beaver stood victorious.

The second day’s format had the players play four games in two lobbies before the top eight advanced to the final for a best-of-one winner. There the grand finalist would walk away with $5,000 USD, on top of all their existing earnings. Victor JoshOG bagged an incredible $8,375 after his two days at the top.

The event, hosted again by Caleb “WavePunk” Simmons, was commentated by the returning Mark “MarkZ” Zimmerman and Sam “Kobe” Hartman-Kenzler, whose passion for the tournament seemed only exceeded by their desire to play the game itself. On day two, the commentary stepped up a notch, expanding more deeply into the strategies and builds of these top players.

It was also refreshing that the event offered detailed profiles of some of the competitors, explaining their backgrounds, along with most picked class and placements from yesterday. This kind of excellent foundational knowledge is ideal for expanding TFT’s burgeoning fanbase.

In a slightly prophetic move,  JoshOG was one of the players on the receiving end of an in-depth profile. As a streamer, he’d previously made a name playing First Person Shooters, before recently shifting to autobattler games. Throughout the early parts of the tournament, his great sense of which units and alliances to focus on secured him a spot in the final 16.

In fact, as the event continued, we really got to see the difference between the very best in the game and those who wouldn’t make the cut. People who’d stood out yesterday, like Jason “Amaz” Chan and Fernando “Ness” Torigoe, fell by the wayside as the dominant players such as yesterday’s winners, Byron “Reckful” Bernstein and Şükrü “Uthenera” Şentürk, surged ahead. Fan-favorite William“scarra” Lee dropped out of contention after a seventh-place finish in his final game, dropping him entirely out of finals contention.

Two of the more surprising finalists were Andrew “TidesOfTime” Biessener and Octavian “Kripparrian” Morosan. TidesOfTime is a multi-game pro, who has moved from Dota 2 to Hearthstone and now to TFT. His versatility was on display, as he continued to secure high finishes. Kripp, a veteran of World of Warcraft, Diablo III and, most notably, Hearthstone, is one of the most recognizable faces in streaming, and his success in the tournament was surprising. He said himself that his secret to success in TFT was “not playing the game that much.”

But perhaps a more relaxed approach to the game is part of the secret of success. While TFT has had a whirlwind development cycle, fundamentally it remains the same game as it was upon its reveal. The most recently added piece to the game, Twisted Fate, was almost useless this tournament, only used occasionally to add Pirate alliance, and once forced as a carry by scarra.

In the final match, Reckful found himself eliminated first, while standout player David “Dog” Caero, quickly found himself on the verge of death. Kripp led from the beginning, but the HP scores dropped quickly. TidesOfTime was the first victim of this drop in health, and GN_GG followed shortly after. The final four came down to Uthenera, Kripp, Jan” superJJ102” Janssen, and JoshOG. But JoshOG’s super-critting, double-Assassin-buff Volibear was just too much to handle, eliminating each player in turn for the win.

TFT has sometimes been compared to poker because even though it’s luck-based, the best players can manipulate that luck to their advantage. Indeed what stood out this tournament was just how consistent some of the top players were in spite of luck. JoshOG, in particular, seemed able always to find the crucial Volibear pieces that he needed to carry. He deservedly takes home the win, after an incredible two-day TFT Showdown.