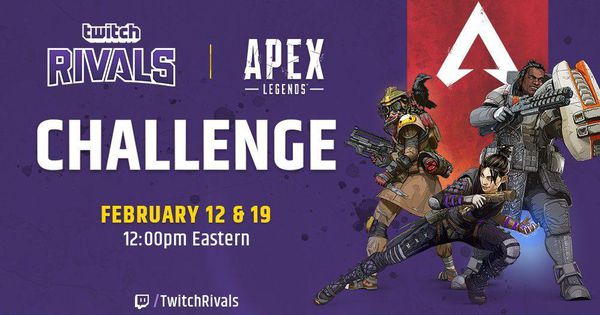 Twitch Rivals series of game-specific challenges for streamers continued on February 19 with the Twitch Rivals Apex Legends Challenge. It was the second iteration of the competition, crowning a new European team and a new American team as the best of the pack.

The tournament used a different format than the previous week’s Challenge. The four-hour period of time was broken into two halves, allowing for a quick break for the streamers. Prize money was assigned based on position after the first round and the second round, as well as for the overall placement. Placement was determined by points assigned for kills and ranking in each game. An additional three challenges awarded teams or players with extra cash. There was $3,000 USD for being the first team to “spot Nessie” and also for completing the “rainbow challenge” (winning games with all of the different legends). Twitch also awarded $1,000 for having the most kills on each legend, for a total of $8,000.

These extra challenges incentivized players to try different strategies – and to play Gibraltar, who got very little love last week.

In Europe, the big winners were Solary, a French team who took first place. They had 387 points ultimately, taking home $11,300. These three streamers were able to play from the same place. Wtcn took second place with 383 points, only four points behind the winners. They also took home $11,300 due to their placement earlier in the day.

Only 4 points separate the top 2 teams!

In North America, Scotts Tots had a solid win with 393 points, earning themselves $11,200. The second place team, fielded by organization TSM, had 377 points and took home $10,300. They lost by sixteen kills.

Team Kephrii, despite being in fifth place in the final standings, took home $10,300. They focused on completing the Nessie Challenge and the Rainbow Challenge to take home some extra cash.

Team Moistcr1tikal was one of, if not the most, entertaining streaming team of the day, making up for low points by cracking jokes and taking a self-deprecating approach. Undoubtedly the squad made new fans today.

During the break between the European and North American segments of the event, the hosts of Twitch Rivals announced that a new weapon will be released tomorrow (February 20). The gun is called the Havoc. A brief clip of the gun in action was shown, suggesting it will be an energy rifle.

What’s Next for Twitch Rivals and Apex Legends?

The next Twitch Rivals event will be February 20. It’ll be the Twitch Rivals: Magic: The Gathering Arena Showdown for $10,000.

While there are no official Apex Legends on the horizon, the development team continues to be responsive, releasing updates regularly. Several professional organizations have begun looking for players to add to their teams, so expectations are high that this popular battle royale title is going to have a lasting impression on the landscape.