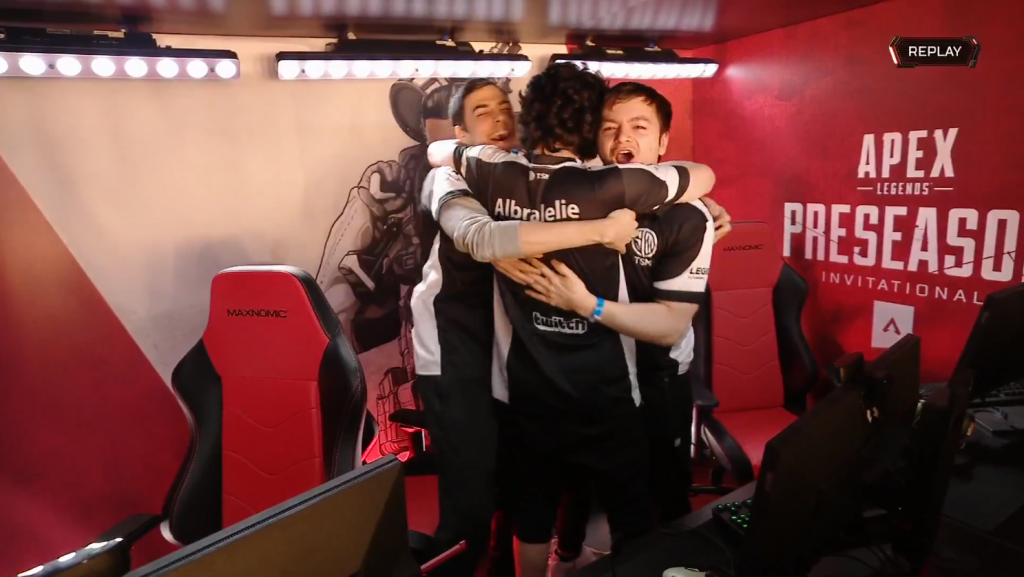 Respawn Entertainment and Electronic Arts should be very happy with how their first Apex Legends event went. The Apex Legends Preseason Invitational in Krakow, Poland wrapped up three days of action with the Grand Final on September 15. After 11 rounds of play, TSM took home the win. They took home US$105,000 of the $500,000 prize pool.

Tonight, history was made. Join us in congratulating your Apex Legends Preseason Invitational Champions, @TSM! 🏆👏 pic.twitter.com/UecJ5c8Tku

After racking up the minimum 50 points required to be eligible for match point—the status that meant a team could then win the tournament by winning a map—TSM put in an impressive effort. They secured their 50 points after six rounds, but then it took five more for them to eke out the win. There was a tense moment in round eight when TSM’s Phillip “ImperialHal” Dosen and GamerOrigins Romain “wSerious” Dittmann were the last two players standing, but wSerious clutched it out, and forced TSM to take another three rounds to secure their victory.

TSM were in the top of each of their groups through the bracket leading up to the Grand Final, placing second, first and third in each segment of the bracket. They came in as the reigning Apex champs, having won the Apex Legends EXP Invitational at the X Games in early August.

The game’s meta seems to have settled around the Wattson, Wraith and Pathfinder line-up. Wingmans, Longbows, R-99, R-301s and Peacekeepers generally seemed to be the preferred weapons, though we certainly saw a broad range of pick-ups as, of course, players had to rely on what loot they could locate.

Teams also seemed to have “claimed” drop locations across the map. As an example, Natus Vincere favored Air Base, while TSM preferred the Cage. Early engagements were rare – perhaps a few contesting deaths, but then a long mid-period of poking, trying to use up the health and armor resources of other teams, featured teams setting up bunker locations while harassing each other. The final circles then saw a lot of grenade usage, and speed-looting of boxes, while teams took each other out in the chaos caused by the limits of the ring.

There have been a few other Apex events at this point, primarily online via Twitch Rivals. The Apex Legends EXP Invitational at the X Games was a solid LAN event. But the Preseason Invitational gave us Apex Legends on another level. The broadcast was ad-free, with constant action to watch, a solid analyst desk and a Command Center featuring an impressive wall of screens and plenty of replay-insights.

The Grand Final format ensured that the event went out on a win. Instead of playing a set number of maps and totaling up points, the teams had to achieve that fifty points and then win a map. And the tension built beautifully across the final rounds of the game, as more teams became eligible for the win. Each round became a count down of how many teams remained in the mix who could close it out, and when teams who weren’t eligible clutched out the wins, the crowd cheered for the next map.

Earlier in the day, as the lower bracket finals wrapped up, there was an emotional moment as teams on the cusp of elimination waited to see if their final round results were enough to send them to the Grand Final.

The only real sticking point in the event was trying to keep track of all the group action. Eighty teams are a lot for viewers to remember and track. The broadcast team did their best to keep fans informed, and production used a variety of tools including a ticker and various overlays displaying results to update viewers accordingly.

Undoubtedly, familiarity with the map also plays into how watchable the tournament was. Because the game cuts from player perspective to player perspective, it could make it difficult for anyone unfamiliar with the map geography. Fortunately, Apex Legends enjoyed such a period of popularity that surely everyone knows the map by now, right?

During the Grand Final of the Preseason Invitational, Respawn announced that there will be weapon charm rewards for player placements in Ranked.

Respawn is calling this Series One, and it’s scheduled to end on the last day of September. Players only have a couple of weeks left to rank up for fancier medals.

In terms of professional Apex Legends, the next major event will be at TwitchCon San Diego, on September 29. Twenty teams will compete then for $500,000. The news teased by Respawn/EA during the Preseason Invitational is that there will be additional global, online and offline events. Stay tuned for additional announcements about the upcoming Apex professional season.