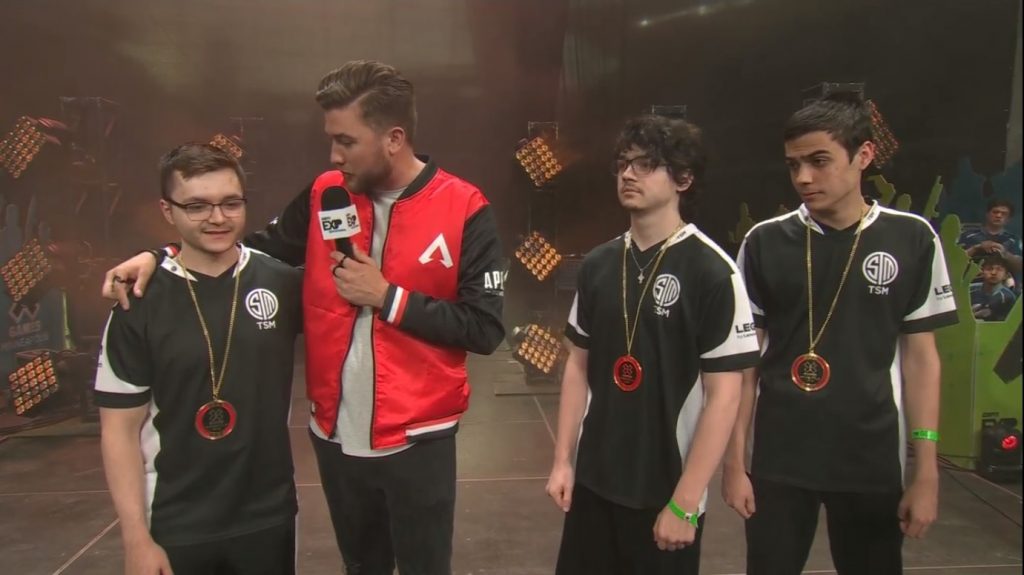 In a two-day competition featuring 20 teams, Team SoloMid claimed the gold at the EXP Invitational – Apex Legends at X Games Minneapolis. TSM took home US$30,000 for their efforts.

The tournament involved 15 directly invited teams and five teams that qualified through regional invitationals. Competing alongside TSM were the likes of NRG Esports, Counter Logic Gaming, Fnatic NA, Tempo Storm and others.

TSM is composed of Phillip “ImperialHal” Dosen, Mac “Abralelie” Kenzie Beckwith and Jordan “Reps” Wolfe. They squeaked out the win with a tight five-point margin over the second-place team, Team Reciprocity. Their first-place finishes in rounds four and eight, as well as second place in the final round of the tournament, went a long way. Points were assigned by placement, with a single point given for each elimination in a given round. TSM racked up an impressive 65 kills in 12 matches, though they were out-killed by Team Reciprocity who had 68.

The final standings and scores were as follows:

This event used custom lobbies to put the teams into the same map for each of the twelve games, rather than tallying results out of public games. It was our first glimpse at the kind of high-quality Apex Legends competition we can expect from the professionals as the Apex Legends competitive scene continues to develop.

Plays such as the one in the Twich clip below that lead to Fnatic winning the fifth round should whet fan appetites for future competitions. The quality of competition is so much higher when teams face each other directly. It’s exciting to watch this level of Apex Legends play, when every game comes down to the wire, with squads jockeying for position around a tiny late-game ring.

The next major tournament on the horizon for Apex Legends will be the Apex Legends Preseason Invitational announced by Respawn and Electronic Arts for mid-September.