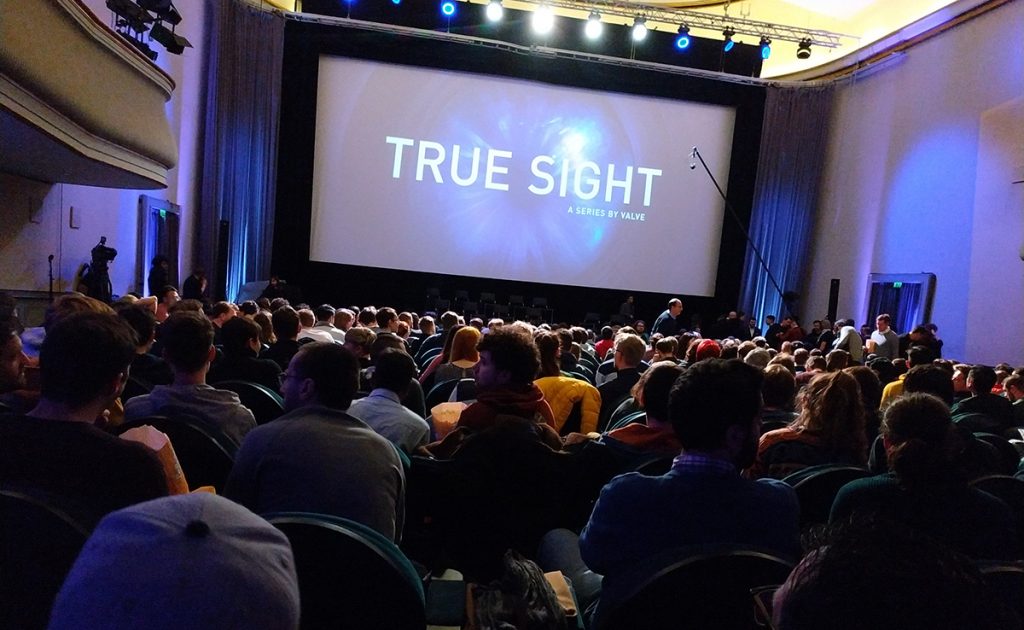 The newest episode in the Valve’s True Sight series aired Tuesday night. A behind-the-scenes look at the historic clash between OG and Team Liquid at The International 2019 in China. I was fortunate enough to get a hold of a ticket for the True Sight premiere in Germany ahead of time. I was not the only one that flew in for the occasion. There were audience members who had traveled from Peru, Argentina, Iceland and India just to enjoy a piece of Dota history.

The premiere was held inside the Babylon, a 500-seat auditorium in central Berlin which specializes in art house cinema. It was not the first time a True Sight episode has premiered in a cinema, but it was the first time that the losing team joined the winning team on stage for a Q&A.

It was a dark and cold night in Berlin, but spirits were high outside the Babylon theatre. Online friends laughed and japed as they awaited the rest of their party. “I wonder who wins,” said one attendee, while another was in deep talks with his friends about who should shout ‘Let’s go Liquid’ during the premiere.

Inside the Babylon the atmosphere was very chill. The TI winners OG and their opponents Nigma (formerly Team Liquid) were happily meandering through the small crowds, dressed to impress and all smiles. The red cordon between player and fan was nowhere to be seen, a rare sight outside of an event after-party.

TI9’s hosts SirActionSlacks and Kaci Aitchinson opened the show for attendees before the stream went live. For the most part, their role in the evening was fairly minimal outside of the Q&A. The true hosts of the evening were ODPixel and Fogged – casters of the TI9 Grand Finals and the voices that rang through the Babylon.

Unlike previous iterations of True Sight, the losing team was not seemingly deliberately portrayed as the villain. Team Liquid – now Nigma – would go on to lose the Grand Finals. But many of the most touching moments and iconic quotes would come from their captain Kuroky and new recruit W33haa. Probably the most memorable of which was Kuroky telling his team that OG were monkeys (below). It then cut to OG impersonating monkeys and N0tail ironically being handed a banana post-match by Seb’s brother. You couldn’t make this stuff up.

What was your highlight of #TrueSight?

However, it was the SFM moments during True Sight that undoubtedly received the loudest applause. In particular, the invis Tiny gank on Rubick (below) which were created by freelance Dota 2 SFM artist Maxime “@MaxiLebled” Lebled.

Throughout the premiere, there was roaring laughter and frequent rounds of applause. Mostly due to one teams shock as the other somehow predicted their intentions perfectly. In the post-movie Q&A that was actually one of the more interesting questions. The teams were asked whether they were aware just how well they could read each other’s plans before seeing True Sight. Both captains agreed it was no surprise.

Mutual respect between the two teams was evident. Kuroky shared how he admired N0tail’s ability to motivate his team, stating he had learned a lot from watching his friend lead OG. This comment received a huge applause from the audience.

Overall, the True Sight premiere was an unforgettable celebration of Dota 2. Given the toxicity of PUB games these days, it’s a warm reminder of what made us fall in love with the game in the first place. The decision by Valve to invite the runners-up on stage could have been awkward. But the camaraderie and respect between the two Grand Finalists led to some unique interactions we would never have otherwise seen. Valve gave a pre-screening of True Sight to the two finalists with both sitting right next to each other.

TI9 was of course incredibly historic. Not just for its $34 million prize pool, but for the fact that nine of the 10 players in the Grand Finals had the potential to become the first two-time winners. OG’s victory in China last summer saw them win $15.6 million. For once, True Sight celebrated not just the winner, but their adversary. Something the Dota 2 community should take to heart the next time they head into a PUB game.

Oh… and OG announced Sumail at the premiere but we kind of knew that already. Thanks Reddit.