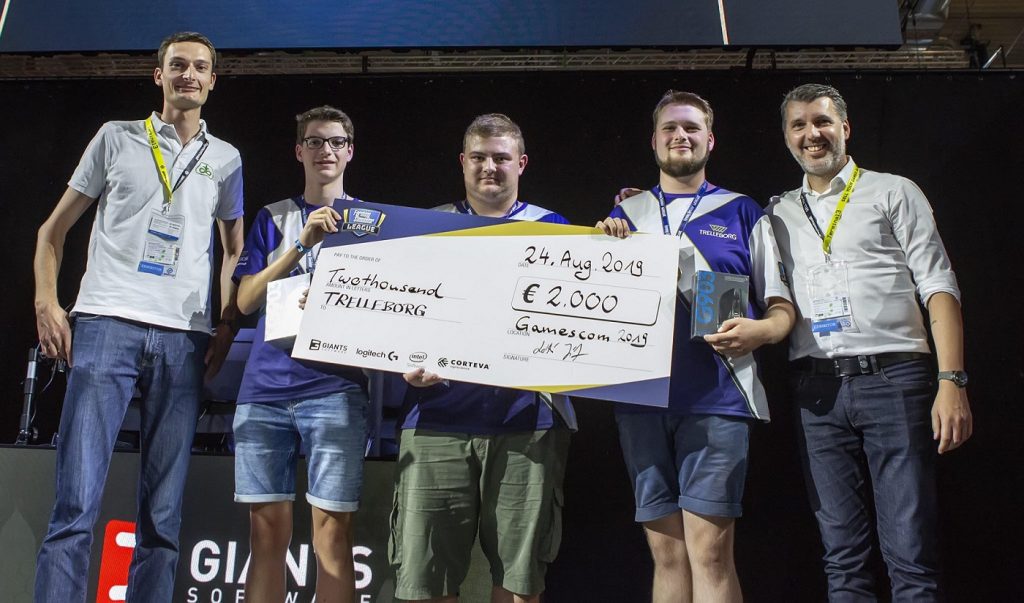 The second Farming Simulator League event came to an exciting conclusion as Trelleborg took their second win of the season. FSL went to Gamescon in Cologne, Germany this past week, with the event concluding on Saturday, August 24.

Sixteen teams competed to qualify for the playoffs. Saturday saw the field narrowed to eight, seeded into a single-elimination bracket. The quarterfinals and semifinals were all best-of-one matches, followed by the best-of-three grand finals.

It came down to Trelleborg and Horsch in the finals. Horsch had beaten first Die Landeier and then John Deere, while Trelleborg came through mYinsanity and Krone. The semifinal match between Trelleborg and Krone was a rematch of the semifinals at FarmCon 19, which had the same result: Trelleborg going on to the grand finals.

At Gamescon, the finals were tight. Trelleborg took the first match in the last four seconds of the game by squeaking in a pair of bales right at the buzzer. Horsch came back in the second match, using the speedy AGCO IDEAL 9T, a specific Harvester strategy that they’d used to great effect through the whole tournament. Horsch also blocked Trelleborg, paying out the grain multiplier to shut down the Trelleborg conveyer belt for a period of time. They put in a massive score of 867 compared to Trelleborg’s 538.

Trelleborg came back in the third game determined to undo Horsch. And boy did they. They learned from Horsch’s block tactics to counter with their own grain to flip the multiplier back in their favor. Horsch took far too long to respond to that. The final score? 705 for Trelleborg and 293 for Horsch! It was a decisive victory in the final match.

One of the interesting aspects of this event is the evolving FSL meta. The teams have adopted a strategy involving placing four bales of hay in two-by-two stacks or three bales stacked atop each other to load on to the conveyer belt.  This resulted in some pretty wobbly stacks, and some bales fell, going uncounted. A light touch to place bales is one of the highest-value skills in the game right now. The other is, as the grand finals proved, managing the grain multiplier and realizing when to counter or shut down your opponent. This component is key to keeping the game competitive and not simply a matter of who has better muscle memory to complete the most efficient movements across the map. Looking ahead at the next event, the grain multiplier should be even more highly contested.

With this win, Trelleborg sit in first place in the FSL Circuit, with 180 points. Krone sits in second with 100 points, a fair distance behind the champions. Trelleborg took home €2000 in prize money.

You were awesome. it's time for us to pack up and get our stage ready for Zürich Game Show! pic.twitter.com/2GGQ42oKxg

There’s something undeniably charming about this nascent esport. It’s such a niche game, with a dedicated community. FSL  borrows aspects from far-more established esports but does it in a way that feels down-to-earth and authentic. The broadcast was very educational in its style and welcoming of anyone new to the game.

The next Farming Simulator League event will take place September 13-15 at the Zurich Game Show.