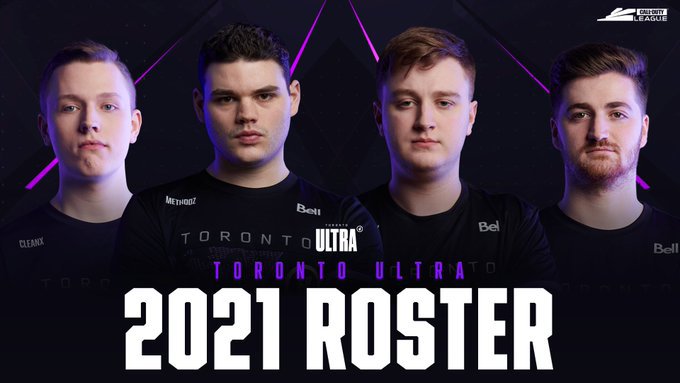 Another Call of Duty team has revealed its 2021 roster. (Photo courtesy CDL)

The Toronto Ultra has revealed its Call of Duty lineup for the 2021 season. Anthony “Methodz” Zinni, Ben “Bance” Bance, Cameron “Cammy” Mckilligan, and Tobias “CleanX” Juul Johnson, the only players remaining after drastic roster changes, will continue to play for Toronto next year.

The Ultra cut six players from the roster at the end of the 2020 season to prepare the switch to a 4v4 format. Toronto featured one of the biggest rosters in the Call of Duty league with ten players signed, but the core players were rarely substituted. The Toronto lineup remained relatively consistent during the inaugural season. CleanX did replace Nicholas “Classic “DiCostanzo on the starting roster, but this was the most significant change of the year.

Toronto struggled at the beginning of the season but regrouped and performed better with the help of CleanX. The team won the final Home Series event of the regular season but was ultimately eliminated by the London Royal Ravens. The core roster showed promise and will likely continue to be a competitive team next season.

Every Call of Duty team has made changes in preparation for the upcoming season. Each organization was forced to bench or drop a player in response to the new format, and several teams made drastic cuts to their rosters. Toronto is the only team to maintain its starting lineup from the inaugural season as every other team has either dropped or added a new player.