Topoon: “Playing against Team Liquid is going to be really cool” 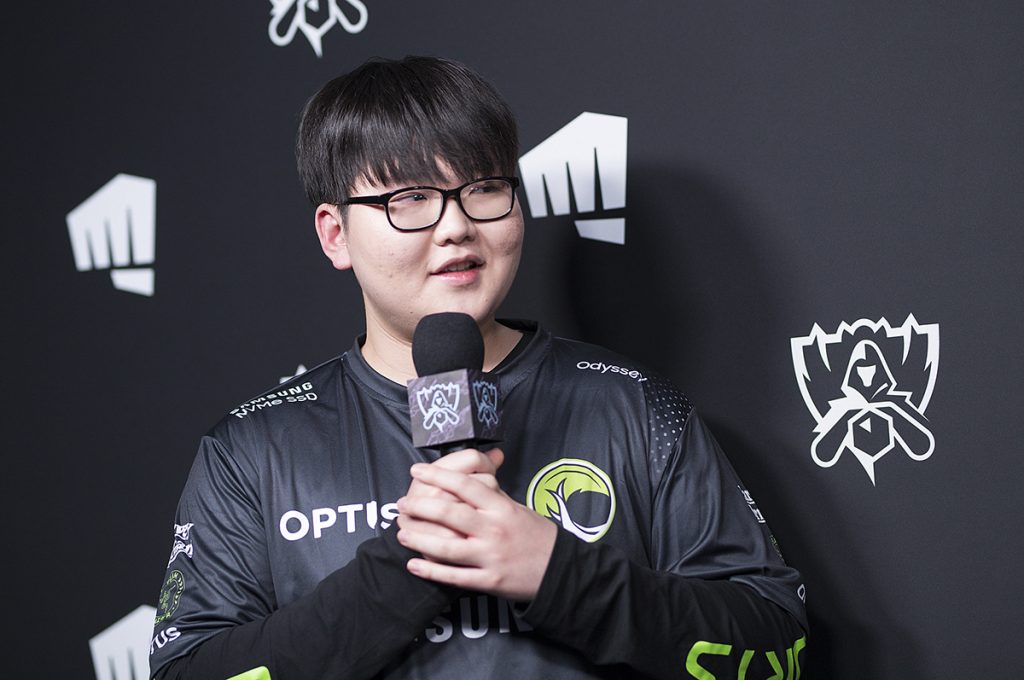 Fans of the OPL had reason for celebration today. Their representatives at the League of Legends World Championship, Legacy Esports, won their first match in the Play-In stage. While it was definitely a scrappy game Legacy played against the Brazilian INTZ and Legacy will have to step up their game against the likes of Team Liquid, the good start to Worlds is a nice boost to have.

After the match, we spoke to Legacy’s top laner Kim “Topoon” Ji-hoon. He told us what it’s like to play at his first World Championship, and discussed the strengths and weaknesses of his team. He also looked at the other teams present at Worlds and told us how he feels about playing against them.

Hotspawn: Hello Topoon, thank you for joining and congratulations on winning against INTZ. That was quite a chaotic match—how do you feel about it?

Topoon: Well obviously this was my first game at a World Championship. Even though I made a lot of mistakes and my mid and jungle carried today, it was a special match for me. That’s what I’m thinking about most now.

Hotspawn: How is it for you to be at Worlds? Is it as magical as you dreamed it to be to walk among all these international players?

Topoon: For me, playing against the best players from each region is truly a special experience. Playing against Team Liquid tomorrow is going to be really cool. I want to win against them. OCE is better than NA.

Hotspawn: Oh, you think OCE as a region is better than NA?

Topoon: Well, it’s a bit of a joke. But I do think that we can beat them. [laughs]

Hotspawn: I think it’s fair to say that OCE isn’t seen as one of the stronger regions in general. It’s a pretty isolated region as well. How do you perceive the region’s strength at the moment?

Topoon: I think it’s mainly about the player skill at the moment. Every good player we had ended up being important by NA or EU. So I think that there is a bit of a gap when it comes to the player level.

Hotspawn: Still, today you managed to win your first game against INTZ. What makes Legacy Esports strong as a team?

Topoon: Well, I think for our team specifically, the strength is that we can play surprising champions. Our mid laner has a different champion pool. So when we draft, our opponents can not really know what to expect. It is going to be difficult to make it to the Group Stage. But we are playing in a best-of-one until the Play-In playoffs. If we can cheese some games, or if we manage to play really well, I think we have a chance of getting to the Group Stage.

Hotspawn: What is something that your team struggles with?

Topoon: I think our macro play, I would say. I think we know it well, but I think regions like the LEC and LPL know it better.

Hotspawn: The match you played against INTZ was your first one of the tournament. What did you pick up from it that you want to implement against your remaining opponents?

Topoon: Honestly, I can’t really remember the game specifically at the moment. *laughs*

Hotspawn: No problem, let me refresh your mind: it was very chaotic and there seemed to be fights all over the place constantly.

Topoon: Oh yes. Our team doesn’t really care about losing a skirmish. We just fight. If we have a chance to fight, we do it. I don’t really know what I learned from the game against INTZ though. I think I’ll need to watch it again to know what I want to learn from it.

Hotspawn: Your future opponents are Team Liquid, MAD Lions, and Papara SuperMassive. Which of these teams do you look forward to facing?

Topoon: Well, I don’t think it will be easy for us to play against a major region team. I think we can win against Papara SuperMassive. But they are a good team too, so it’s still going to be hard.

Hotspawn: If you do manage to make it to the Group Stage, you’ll probably also play against an LPL team. What are your thoughts on the teams from this region?

Topoon: I think the LPL is probably the best region in the world at the moment. Or at least in the top two. Obviously, I will be really nervous if I have to play against a Chinese team and it will be hard to win. But I think, if we do our best, we can still win.

Hotspawn: Lastly, do you want to say anything to the OPL and Legacy fans?

Topoon: Thank you all for supporting us. Hopefully, we can make it to the Group Stage. We will do our best. Thank you!

Legacy Esports’ next opponent is Team Liquid. The match is scheduled for September 26th at 4 p.m. CEST.