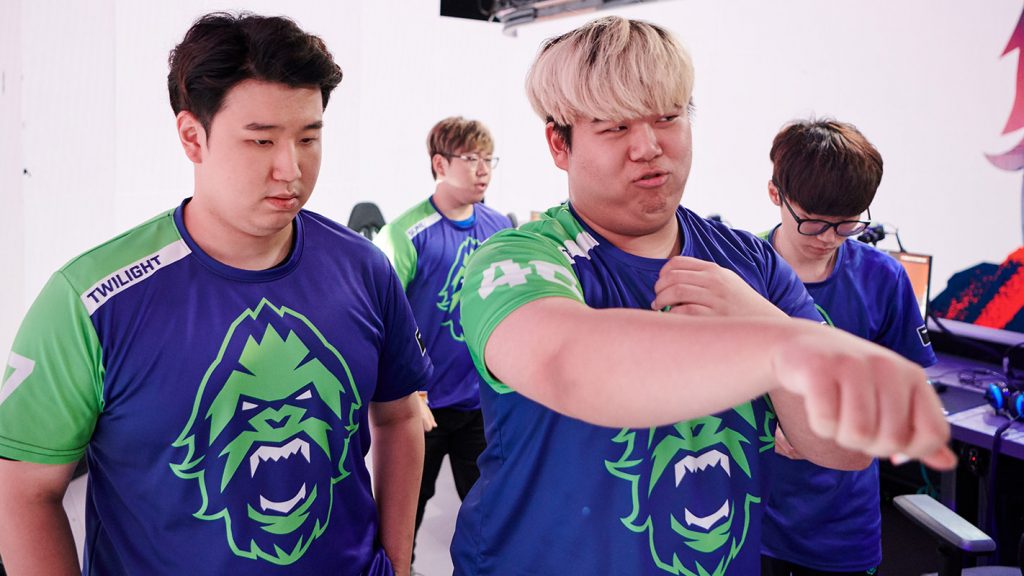 With the Overwatch League 2019 Grand Finals a few days away, we’re breaking down the top-five plays of the OWL postseason so far. (Photo via Blizzard Entertainment)

After an electrifying sophomore season, the Overwatch League 2019 Grand Finals is almost upon us. The San Francisco Shock and Vancouver Titans will compete in a best-of-seven map series at Wells Fargo Center on September 29 in Philadelphia in hopes of winning $1,100,000 USD the Overwatch League Championship.

The journey to the Grand Finals was chalked full of back-and-forth matches with some impressive individual plays. Ultimately, five stand out as the best of the best. There were hundreds of potential picks for this list, so keep in mind some great plays didn’t make the cut.

5. TiZi Sends Gladiators for a Swim with Perfect Halt

Jang-hyeon “TiZi” Hwang has proven to be a great late-season addition into the Titans starting lineup. His tank play, specifically with Orisa, has been superb. TiZi is a huge reason why the Titans are heading to the Grand Finals.

In Round 1 of the winner’s bracket, TiZi sent the Los Angeles Gladiators to their death with a perfectly timed Halt! in combination with a Doomfist’s (Haksal) Rising Uppercut. The Gladiators could only watch as they fell to their deaths, one by one.

We're looking forward to more of these plays when the @VancouverTitans take on the @SFShock in 12 days. #OWL2019 pic.twitter.com/ubxPEIk3eq

The Shock’s Jay “Sinatraa” Won was Overwatch League MVP in 2019 thanks to his top-tier tank play with Zarya. However, what makes Sinatraa a special player is his ability to shift roles and dominate. In Week 2 of the OWL playoffs, Sinatraa obliterated Hangzhou with Doomfist while playing DPS, which he was previously known for.

On the first map of the series in Busan, Sinatraa pulled off a team kill combo against the Spark. After Orisa (Smurf) managed a nice team-grabbing Halt!, Sinatraa got three kills by combo-ing with his Meteor Strike ult. He wasn’t done there, killing two more with his Hand Cannon as Sinatraa and the Shock team-killed the Spark in quick fashion.

The Shock have a chance to become OWL champions for the first time in franchise history next week and Sinatraa is undoubtedly the catalyst to San Francisco’s breakout season.

Sigma might be Overwatch’s newest character, but his effectiveness in competitive play has been on full display since he was introduced into the meta. In the Round 2 winner’s bracket matchup between the Vancouver Titans and New York Excelsior, Sigma’s Gravitic Flux combination potential was realized.

With New York defending the first point on the Temple of Anubis, Meko’s Sigma manages to catch the entire Titans’ offense with his flux. As Sigma’s uses his ult, Saebyeolbe’s Reaper quickly teleports onto high-ground and unleashes a vicious Death Blossom on the Titans suspended-in-air players. The result is a nasty team kill, sending Vancouver back to their spawn.

The Titans might have won the series 4-3, but plays like this proved New York is a legitimate threat when firing on all cylinders – even in the postseason.

2. Profit takes down the Dragons

In the play-in semifinals, the 7th seed London Spitfire and 11th seed Shanghai Dragon’s faced off in an exhilarating series which ended up going seven maps. While there are a ton of standout plays from the series that could have ended up on this list, Joon-yeong “Profit” Park’s incredible Tracer play stands above the rest.

Up 2-0 in the series with the Dragons closing in on the second point in Hanamura, Profit unleashed an insane Tracer combo.

First, Profit takes down a boosted Pharah (DDing) while maintaining height. After getting the kill, he pulses down and takes down Mercy (Coma), chasing her mid-air and finishing her off on the ground. If that wasn’t enough, Profit uses Recall after the kill and takes down the Dragons second healer Ana (Izayaki).

The Spitfire couldn’t repeat as OWL champions. However, they proved they can still pull off some ridiculous plays in big moments.

Taking down a booster Pharah, a Mercy, and an Ana in the span of 10 seconds was pure dominance from Profit. He is known for pulling off big plays, but even for him, this was special.

As a player, there are few kills more satisfying than environmental boops with Lucio. Knocking someone off the map is a great feeling. For the Shock’s Grant “moth” Espe, he must have felt amazing after nearly team-killing the Atlanta Reign with his soundwave in Week 1 of the OWL playoffs.

On map 7 in Rialto, moth pulled off one of the most ridiculous plays in league history. It started quite simply, with moth booping an overly aggressive Sigma off high-ground into the water for a solo kill. He doesn’t stop there as he drops down, climbs back up to the same spot and knocks four Reign players into the drink. Just an insane individual effort by moth.

There are no question players will think twice before putting themselves in vulnerable, boopable positions with Moth-lurking.

For those looking to watch the Grand Finals, they will be streamed on Twitch on September 29 and broadcast on ABC at 3 p.m. EDT. You can also stream it on overwatchleague.com, the OWL app, and on the ESPN app.

Overwatch
Share
Liam McGuire
Liam is a writer and content editor with a special interest in esports, specifically the competitive Overwatch and Fortnite scene. Liam has played Overwatch since beta and still hasn’t hit diamond. He has had bylines with MLB.com, TSN, Vice Sports, Cineplex.com, and Awful Announcing.
Follow me