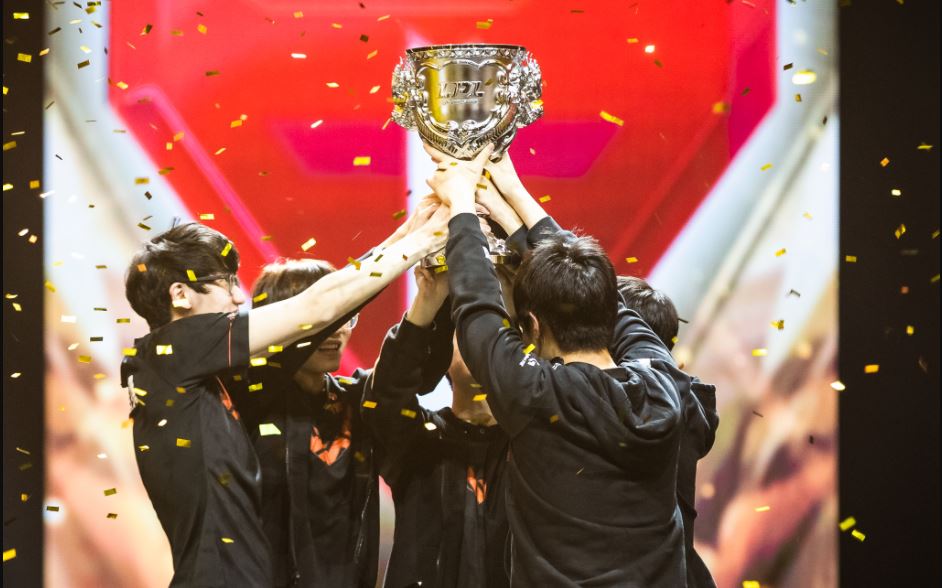 The LPL playoffs concluded with the finals of the Summer Split. After losing to JD Gaming in five games in the Spring Finals, Top Esports turned the tables and beat JDG in five games to take home their first LPL title. This big win from League of Legends’ top region begs the question — are Top Esports the 2020 World Championship favorites?

After JD Gaming and Top Esports clashed for an epic five-game series to end the Spring Split, there were a lot of expectations for their second meeting. In the time between the two meetings, Top Esports claimed the Mid-Season Cup title and took home the LPL’s regular season title. JD Gaming were the reigning LPL champions, but Top Esports had their own share of recent victories. While both teams got hot at the right time to end Spring, there was no doubt they were the two best in China in Summer.

a HUGE teamfight win for TES directly translates into the JDG nexus!

Top Esports took First Blood in the series. JD Gaming led for the first 25 minutes of game one but Yu “JackeyLove” Wen-Bo’s Jhin stepped up in the mid game. His long-range CC and damage helped TES turn around the team fights, leading to TES’ 25 kill to 16 win in 33 minutes. However, JD Gaming quickly evened the series. Zhang “Zoom” Xing-Ran’s Camille was too much for TES to handle in the side lane, going 8/4/4 despite Bai “369” Jia-Hao’s Fiora counter pick. JDG won game two up 20 kills to 16 in 37 minutes.

The series continued with the same pattern in games three and four. Blue side won both games, starting with TES in game three. Zhuo “knight” Ding earned game three MVP for his dominant Lucian game, going 11/2/1 to turn around an early JDG lead. Zoom followed with his second MVP in game four, becoming an unkillable Malphite against TES’ mostly physical team. By stacking armor and adding the bonus of two mountain drakes, Zoom was both the leading tank and damage dealer (13.9k) in the game. JDG’s win set up another winner-take-all game five Finals.

However, TES still had one thing going for them: dragon stacking. While JDG were making plays on the top side, Karsa was taking dragons on spawn to give TES a win condition. When JDG contested the third, Karsa won the smite fight against Seo “Kanavi” Jin-hyeok, setting up soul-point for TES.

That fight came as the fourth dragon spawned at 22 minutes. TES tried to burst it down, but Kanavi’s Kindred expertly used Lamb’s Respite to bait out Karsa’s smite. However, when the spell ended, Kanavi couldn’t secure the dragon with his own smite. Instead, knight’s Syndra stole the objective, giving TES a very early Cloud Soul. While Cloud Soul is probably the least impactful of the four, it was nevertheless TES’ way back into the game.

Gaining more equal footing in terms of champion power level, TES were now in control in team fights. The CC combination from Syndra, Ashe, and Leona was too much for JDG, especially when they locked down Kanavi to stop him from using his ultimate. TES used a pick on Kanavi to secure the first Elder Drake and destroy most of JDG’s base.

After a reset, JDG knew they could not give a second Elder to TES. JDG tried to rush down the second Elder at 35 minutes, but TES were ready. Instead of opting into a smite fight, TES just focused down Kanavi, once again killing him before the objective was secured. Once Kanavi was down, TES could easily turn to Elder and take it down. With the power of their second Elder, TES marched into JDG’s base to secure their first LPL title. The kills were tied at 14 apiece when TES knocked down JDG’s Nexus at 36 minutes.

Fresh off a regular season MVP, knight won the Finals MVP as well. The TES mid laner went 23/9/31 across the five-game series, including a 27.2% damage share. With a title now in hand, he’s making a case as the best player in the world.

Top Esports have a lot in common with the two previous World Champions. For starters, both Invictus Gaming and FunPlus Phoenix obviously came from the LPL. Both, though, also improved from the Spring Split to Summer Split. Invictus Gaming went from a fourth place finish in 2018 Spring to a second place finish in the Summer Finals, losing 2-3 to Royal Never Give Up. FunPlus Phoenix went from a third place finish in 2019 Spring to an absolutely dominant 14-1 Summer Split, culminating in a 3-1 Finals win over RNG.

So, it’s obvious that Top Esports have the results that scream champion potential. But, that’s not all. The second that TES acquired JackeyLove in the Spring Split, Top Esports became potentially the most talented team in the world. JackeyLove transformed their bot lane, but we already knew how good 369 and Karsa were on the top side. Knight, coming off the Summer and Finals MVP, is probably the best player in the world.

Top Esports might not have any experience in the World Championship as an organization, but that doesn’t mean their players lack experience. JackeyLove won the 2018 World Champions with Invictus Gaming in his first full season as a pro. He also made it to the semifinals in 2019. Still, he isn’t nearly the most experienced player on the roster. Karsa has been a fixture on the largest stage, as 2020 will be his sixth consecutive Worlds appearance.

DAMWON Gaming seem like TES’ biggest competition — aside from JD Gaming — but there are still questions as to how they will perform on the big stage. DWG were known as scrim gods at the 2019 World Championship before falling to G2 Esports in the quarterfinals. They also went only 1-2 in the Mid-Season Cup, but that was before their Summer tear. All signs point to TES as being the favorite heading into Worlds.

With Top Esports and JD Gaming making the Finals in both Spring and Summer, there wasn’t much drama in the Regional Finals field. In fact, all the teams and matchups were set before the final weekend of the playoffs. Playing in the third-place match, Suning and LGD Gaming were already guaranteed to play in the first match, with the winner picking up China’s third seed in the World Championship.

However, there was one small thing the two teams were playing for in the third-place match: side selection. The winner of the match would get the extra side selection in the best-of-five series. That may not sound like much, but Top Esports used their side selection advantage in game five to win the LPL title.

That side selection will go to Suning after they swept LGD Gaming 3-0 to finish third in the Summer Split. Suning jungler Lê “SofM” Quang Duy played like a man possessed, earning game MVP in all three of the games. Game two’s 7/3/7 Kayn was the only one that stood out on the scoreboard, but he completely neutralized Han “Peanut” Wang-ho in the series to give Suning momentum heading into the Regional Finals.

If nothing else, Suning should have great confidence in their ability to win a quick turnaround rematch with LGD Gaming.