TOP Esports’ Karsa: “We Really Want to Hold This Trophy in China Again” 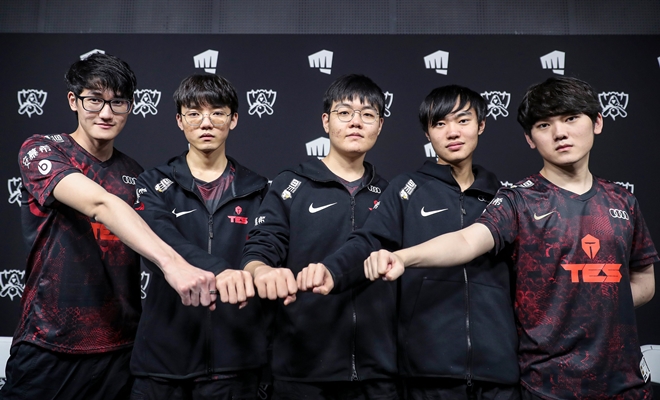 After a historic reverse sweep against Fnatic, TOP Esports are focused on bouncing back against Suning Gaming in the Semifinals. (Photo courtesy Riot Games)

TOP Esports made Worlds history after pulling off the tournament’s first ever bracket stage reverse sweep victory over Fnatic in the quarterfinals. The favorites from the League of Legends Pro League will advance to play Suning Gaming in the semifinals next week.

In the post-match press conference, TES players and staff shared their thoughts on how the series ended up so close, their individual performances at Worlds so far, and what the upcoming match means for them.

After a nearly perfect run throughout the Main Group Stage, TES was pinned by many as a shoe-in to the grand finals. Their matchup against Fnatic, who’d also given an impressive performance in groups, was supposed to be a small stepping stone on their path to contend for the title.

The series wasn’t nearly as easy as TES and many onlookers had anticipated because three Fnatic players showed up in a huge way: Martin “Rekkles” Larsenn, Zdravets “Hylissang” Galabov, and Oskar “Selfmade” Boderek.

TES was slow to adapt to Fnatic’s creativity in draft and picking fights and skirmishes for games one and two, but as the series progressed, veteran jungler Hung “Karsa” Hao-Hsuan was relentless in looking for ways to punish Fnatic’s hectic playstyle.

The player of the series in @TOP_Esports_' 3-2 win over @FNATIC: Karsa! #Worlds2020 pic.twitter.com/7vcvMNd0pp

While Karsa was the recipient of a well-deserved player of the series award, the team’s bot lane had an uncharacteristically rough series, which nearly cost TES the match.

“We didn’t manage to have a very good performance,” said ADC Yu “JackeyLove” Wenbo. “If we performed better in the first few games we would’ve been able to grab the win more easily.”

We saw in the Group Stage after FlyQuest managed to take a decisive win over them that TOP Esports are by no means invincible. Teams that are able to set up favorable drafts or ride the momentum from a well-executed level one strat can take a game off of them. Heading into semifinals against Suning, however, they’ll need to fix the mistakes that were made this series, especially in the early game.

The upcoming matchup between TES and SNG is not only exciting because an LPL team is guaranteed to reach the finals, but it’s also a bittersweet reunion between two veterans and long-time friends in Karsa and SNG support Hu “SwordArt” Shuo-Chieh. 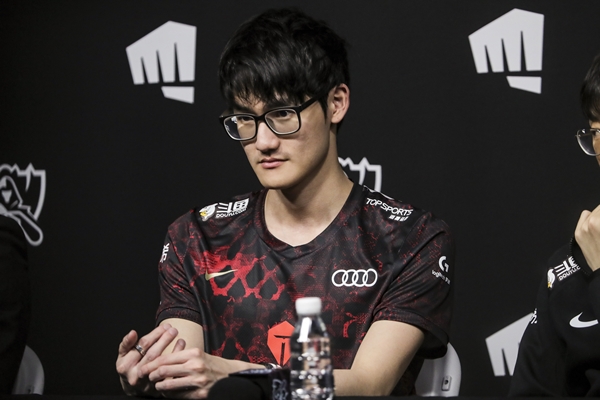 In Karsa’s six-year professional career, he’s only reached the Semi-finals at Worlds once in 2015 despite being regarded as one of the World’s best junglers. (Photo courtesy Riot Games)

“For us, we really want to grab the win, and actually, Suning’s player SwordArt, we are close friends and previous teammates on Flash Wolves,” Karsa said when asked about his former teammate. “No matter who will be able to get into the Finals, the LPL has two consecutive Worlds championships in a row, so we really want to hold this trophy in China again.”

The last time the two played together under the Flash Wolves banner was back in 2017. Even after departing the storied roster from the League of Legends Master Series to go their separate ways, they’ve struggled to find international success better than a top four finish. With the both Karsa and SwordArt Semifinals-bound, only one of them will be able to achieve the goal of reaching the Finals at Worlds.

TOP Esports’ players recognize that improvements must be made if they’re to defeat Suning Gaming in the semifinals, and it might require a pop-off performance from a player that’s been the center of attention since the team’s arrival at Worlds.

Despite being one of the most hyped players coming into Worlds, star mid laner Zhuo “Knight” Ding has received some criticism for his play, despite many consistent performances in the tournament so far. When asked about his thoughts on his play, this is what Knight had to say.

“In terms of my own performance, I’ve performed quite consistently, but I didn’t manage to have as good a performance as I did when playing in ranked. I think that later I’ll have an even better performance.”

TOP Esports will play Suning Gaming in the semifinals on October 25th at approx. 3 a.m. PDT.