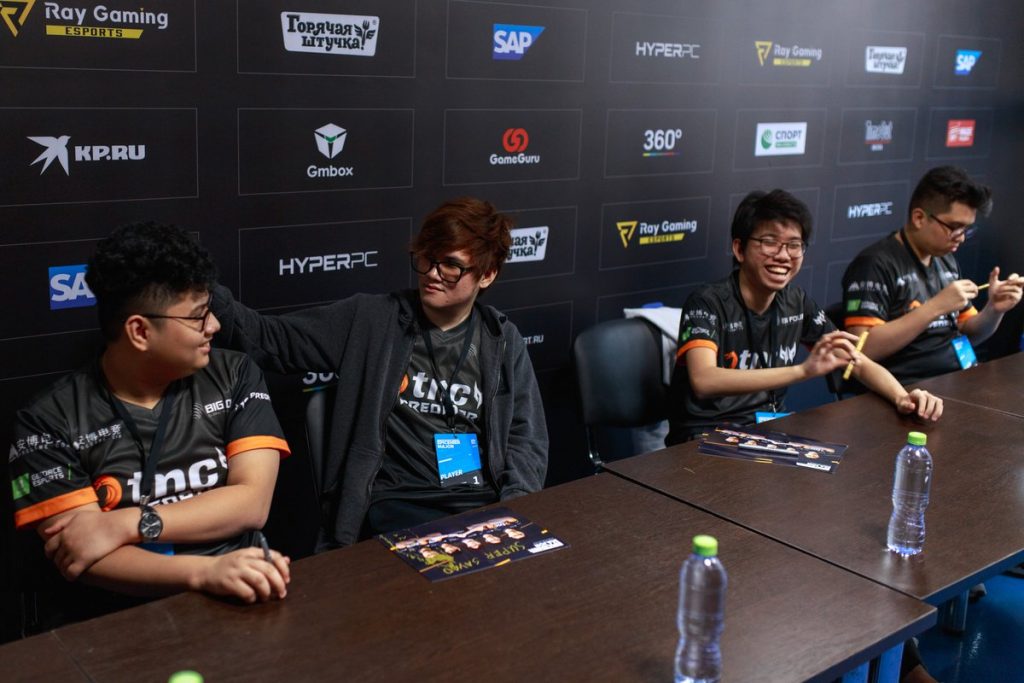 TNC Predator are hoping to leave controversy behind when they compete in Shanghai at The International 2019. (Image via EPICENTER)

Of the teams at The International 2019 this year, TNC Predator stands out for having had to cope with controversy on top of roster issues this year. They felt the ire of Valve mid-season and faced some penalities. That could break a lesser team, but instead, TNC regrouped with a roster change, a new coach, and they could very well be peaking at the best time of the year. Let’s take a closer look at this SEA squad.

TNC Predator want to be the first SEA team to lift the Aegis. (Image via TNC Predator)

After a disappointing result at The International 2018, the organization made some changes. They brought in Gabbi and Michael “ninjaboogie” Ross Jr. for the start of the DPC season. TNC got off to a strong beginning, placing fifth-sixth at the Kuala Lumpur Major and qualifying for the Chongqing Major.

But then the season took a turn.

KuKu was caught up in a scandal around his use of a racial slur. The organization took a few missteps in the aftermath, Chinese fans demanded blood and Valve eventually made a ruling. KuKu had to miss the Chongqing Major, and TNC were penalized DPC points. KuKu ended up taking a temporary leave from the team. TNC could easily have dissolved under the pressure.

Instead, they regrouped. Disappointing results in the first half of the season and a disconnect between players lead to TNC saying farewell to ninjaboogie who now plays for SEA rival Mineski.

TNC added eyyou to the captain’s chair. Eyyou had played with Lotac in the first half of the DPC season without success. He’d played for TNC previously, in 2015-2016, going to his first (and only, until now) TI in 2016 with them and placing eighth. The players were familiar with him and confident that his approach to the game would mesh well with theirs.

But TNC weren’t done making changes. They brought in a new coach in late April, the final piece of the Predator puzzle. Lee “Heen” Seung-gon had coached Team Liquid for more than two years when he made the surprise decision to leave his position with them in November 2018. His departure was not a decision made lightly, with the team and Heen sharing thoughts in a long post.

Heen’s decision to return to coaching with TNC Predator was no less of a surprise for fans. How much of the magic of Team Liquid’s 2017 TI win was due to Heen’s contributions as a coach? Could he bring that same magic to TNC? It’s challenging for viewers to see the impact of a Dota 2 coach, but analysts certainly gave Heen some of the credit when TNC finished fourth at the EPICENTER Major.

Regionally, this organization has been at or near the top for the past two years. But internationally, TNC are rarely part of the conversation for who could dominate an event. And that’s not necessarily because this team *shouldn’t* be part of the conversation. Their placement at EPICENTER and top-ten finish in the DPC rankings this year are strong evidence of that.

Meanwhile, TNC aren’t going to sit around and wait to be noticed. In a video about the team’s journey at EPICENTER, Heen talks about bootcamping for weeks for TI, focusing on becoming more versatile and addressing the team’s flaws. He also discusses the value of fan support for the TNC players.

We can expect TNC to play with their hearts on their sleeves in Shanghai. And if they put in the work and can stay focused during the competition, TNC could reward fans by going very deep in the competition at The International 2019.