TIGER Take Down TYLOO to Win Road to Rio Asia 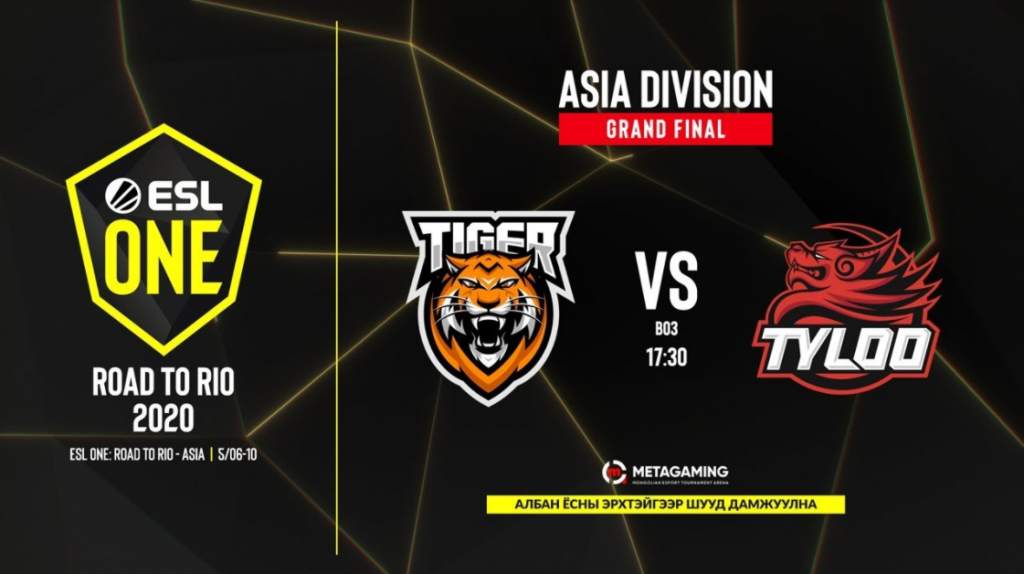 Valve’s first of the new Major qualification RMR events, Road to Rio, has crowned its champion from the Asia region. In a best-of-three that went all the way, the Mongolian TIGER squad took down favorites TYLOO 2-1.

TIGER’s road to the finals wasn’t easy. In their group was ViCi Gaming, a Chinese roster who frequently have international ambitions. Still, even after losing their match against ViCi, TIGER were able to advance to playoffs thanks to 2-0 sweeps over Lucid Dream and Beyond Esports.

In Group B, TYLOO had a 2-0 record going into the final day of play. It seemed inevitable that like ViCi, TYLOO would top their group with a 3-0 record. However, the Mongolian side of D13 had other ideas. They stunned TYLOO with a clean 2-0 upset victory to put both teams at a 2-1 record. Since D13 won the head to head, TYLOO were stuck in second seed.

Semifinals featured an all Mongolian matchup and an all Chinese matchup. In the first game, TIGER easily took their own Dust2 pick 16-7. On D13’s Nuke, TIGER looked to have the 2-0 sweep in the bag. D12 only managed two rounds on their T side throughout the entire first half. Despite this, they fought back valiantly on CT side. As the rounds stacked up, TIGER were unable to break through in regulation with just two rounds of their own. A double overtime ensued which saw TIGER eventually close out the match and advance to finals with a 22-19 result.

The ViCi vs TYLOO game went to three maps. Each one was fairly lopsided, just not in the usual way. ViCi stole TYLOO’s Inferno pick with a dominant T side performance before TYLOO demolished ViCi on their Vertigo pick 16-4. On the tiebreaker map of Train, the first half ended in a close 8-7. Unfortunately for ViCi, their T side left a lot to be desired. TYLOO ran away with the game to secure the 16-9 win.

Much like in the Chinese derby proceeding it, the Grand Finals featured both teams trading their map picks. TIGER struggled heavily to get their T side going on Dust2. Despite having a great 3-0 start thanks to a pistol round win, TIGER only managed to get a single gun round the rest of the half. Now at a 4-11 deficit, TIGER’s defense couldn’t keep TYLOO out long enough. TYLOO took map one 16-9.

Poised to take the 2-0, TYLOO headed to their Inferno pick. TYLOO won their T side pistol round and got off to a 3-0 start of their own. TIGER then went to work racking up the rounds. Although TYLOO did manage more success than TIGER on their map, they still went into the half at a 7-8 deficit. However, TIGER’s T side looked revitalized as they earned every point possible. After just eight short rounds, TIGER ended Inferno 16-7 to force a tiebreaker.

On Overpass, the teams were inseparable in the first half. TYLOO’s early 4-0 lead off of pistol was matched by a five-round streak by TIGER’s T side. More traded rounds saw TYLOO take back a one round lead at half time. Things didn’t get any more decisive as the round difference never went above three. Down 14-11, TIGER pulled off four straight rounds to earn match point first. In round 30, TYLOO came out on top to force overtime. It would be a short lived one, as TIGER took a clean 3-0 CT side followed by a T round to end the map 19-15. TIGER defeated TYLOO 2-1.

Their reward is $4,000 of the $10,000 prize pool, 1600 RMR points towards the Rio Major, and 230 ESL Pro Tour points. While TYLOO only earned half as much cash and ESL points, they still got their hands on 1500 RMR points. With the Asian and Oceanic regions now split due to online tournaments requiring more local connections, new names are rising in the Asian scene. Hopefully we will see more of them in the months to come.