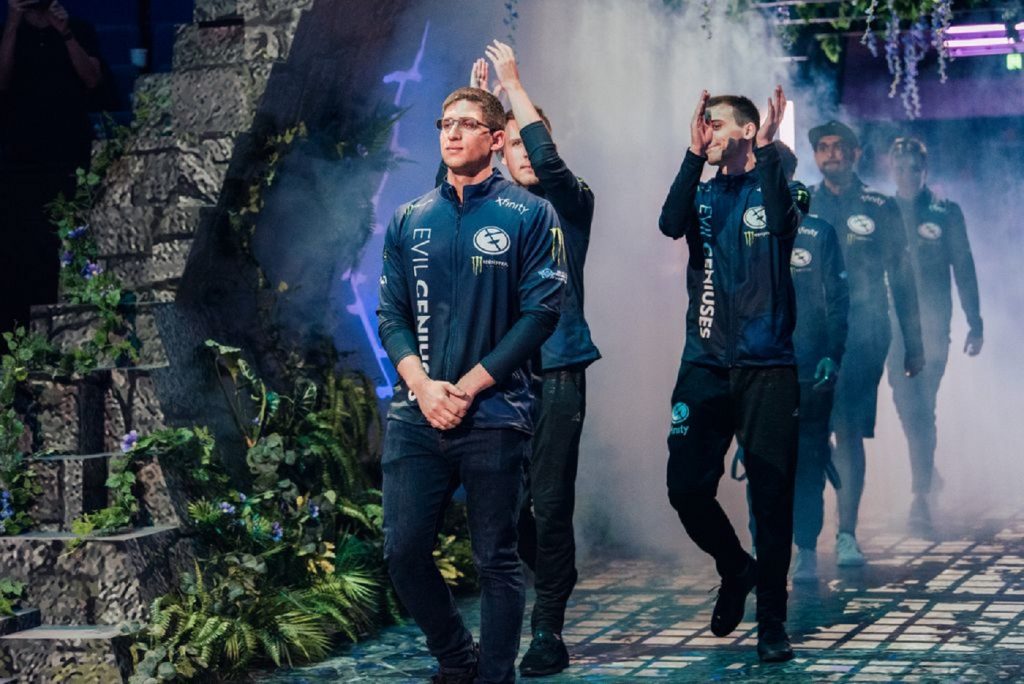 It was a hard fought victory for Evil Geniuses in their TI9 upper bracket match versus Team Secret. (Image via Valve)

On the second day of the Main Stage at The International 2019, we opened with a pair of upper bracket matches. OG versus Newbee was a memorable affair, but it was Team Secret versus Evil Geniuses that most people billed as the title fight for the night. These TI9 upper bracket matches featured some very memorable Dota….

If anyone wondered if OG’s group stage was a fluke, this series should have put that to rest. The International 2018 champions proved on the main stage they are here to win. They’ve got an excellent understanding of the meta, emphasizing heroes and itemization that empower their team fight and support the degree of aggression and map movement that the squad favors.

Newbee, bless them, thought they had a strat to counter the Anathan “ana” Pham carry Io. They wanted to keep the pressure on the wisp, delaying his farm and ideally avoiding OG’s win condition: level 15 with an Aghanim’s Scepter.

In game one, OG on the Dire side drafted around that though, picking up a Bristleback (Topias “Topson” Taavitsainen’s first in a professional game) to provide a beefy shield, an Omniknight for the heal and Elder Titan to stun anyone trying to get to the Io.

The ensuing game was an OG clinic. Newbee had some impressive warding in the top Dire jungle and were able to engage and disrupt ana’s farming early on. However, OG were able to distract the team. At one point, Topson seemed to be moving in circles between the Radiant bottom tier two and three towers, just asking Newbee to rotate down to kill him and free up ana to farm.

It's super warm here outside in China so @TopsonDota just wanted to chill at the fountain #TI9 #DreamOG pic.twitter.com/3QUUFeDO08

Once ana hit his power spike, OG started ruling the map, breaking high ground at 32 minutes and ultimately fountain diving for the win. With Omniknight and Io supporting him, Topson’s Bristleback was able to sit in the enemy fountain without taking any visible damage. “Ok gg” was the Newbee response.

In game two, Newbee banned Io out immediately. No more playing around. They secured a draft of comfort picks that have proven popular at TI9: Enchantress, Shadow Demon, Earthshaker, Ember Spirit and Sven.

OG went in a different direction. With a Magnus, Juggernaut, Treant Protector and Grimstroke, they added a Topson Monkey King. The latter hero has been nearly untouched at this event so far, but after watching Topson on it, it was unclear why.

The real story of the match was OG’s next-level coordination in team fights. They looked fearsome, and ana looked fearless, as they pushed Newbee to the brink and then over it in just over 34 minutes. Newbee just couldn’t match OG’s form, and now they head to the lower bracket. Newbee will face Infamous on August 21 in a best-of-three for elimination.

OG have secured a top-six finish for themselves.

In the first game, it was a tale of no futzing around. Team Secret picked up Enchantress, and Evil Geniuses countered with a Sumail “SumaiL” Hassan Leshrac. It was a hero that Peter “ppd” Dager, joining the drafting panel, called an Enchantress-killer.

Evil Geniuses took care of their Sven pick-up, at one point making camp stacking a team affair to ensure he was well and truly wealthy. They kept the pressure on Yeik “MidOne” Zheng, rotating in supports while he was in lane to keep his Wraith King under fire.

Eventually, it came down to Evil Geniuses capitalizing on team fight wins. At around 36 minutes, they dropped four Team Secret heroes, converting it into a Roshan kill. Team Secret tried to push back, but were team wiped with no buyback, and Evil Geniuses didn’t fuss around. They went straight for high ground, taking the mid lane of barracks and one from the bottom lane.

That relentless focus on objectives kept Team Secret too busy trying to respond to mount any significant response, and Evil Geniuses took the first win in the series.

In game two, Team Secret went for heroes with massive team fight control. With the Enigma’s Black Hole, Faceless Void’s Chronosphere, the Earthshaker Fissure, Crystal Maiden’s Freezing Field and the full breadth of Invoker’s toolkit, Team Secret were well equipped with spells to put the damper on Evil Geniuses’ aggression. EG countered with the Tidehunter Ravage, Shadow Demon’s Disruption, and a Rubick who was perfectly happy to steal all of the wonderful spells Team Secret had thoughtfully provided.

This game was much more even through the early and mid-game. While Evil Geniuses had good lane control, Secret just had so many options in a team fight. Evil Geniuses could drop one hero, and there were four more behind him ready to shut down EG.

While it looked like Evil Geniuses had it at a few points in the game, Team Secret were patient. And when they could get off the Chrono and the Black Hole layered correctly, it was a beautiful, game-winning thing. The last fight at the hour mark was one fight too many for Evil Geniuses. Team Secret team-wiped them with no buybacks available. With the entire EG roster down for at least 90 seconds, they tapped out, taking us to game three.

The story of game three was one of strong lanes for Team Secret, with Mirana and Ogre Magi rotations to support their Weaver in the safe lane and Slark in mid. They never got too far ahead, but they did maintain a net worth lead right up until the end. It was, however, Evil Geniuses took a massive team fight at 30 minutes to turn the game around and then kept the pressure on to take a game-ending team fight at 40 minutes.

We end a MONUMENTAL series against @teamsecret by coming back in Game 3 with a win.

We secure Top 6 at #TI9, and move on to face @OGesports in the next round. pic.twitter.com/Jo8cyOVnxc

Where the OG/Newbee game was all about OG’s superior team fight and coordination, this series between Team Secret and Evil Geniuses saw the teams much more closely matched. They both were focused, able to convert kills into taking objectives and displayed an incredibly high skill level within each fight.

With this win, Evil Geniuses moves on to face OG in the upper bracket on August 22. This will be the exact spot they met in the bracket at The International 2018, when OG beat EG and sent them to the lower bracket. Can OG repeat? Will EG write a new ending to the story this year?

Team Secret move down to the lower bracket, where they will face Mineski on August 22.

Check out our coverage of the first pair of TI9 upper bracket quarterfinals, and come back to Hotspawn for all your The International 2019 updates.