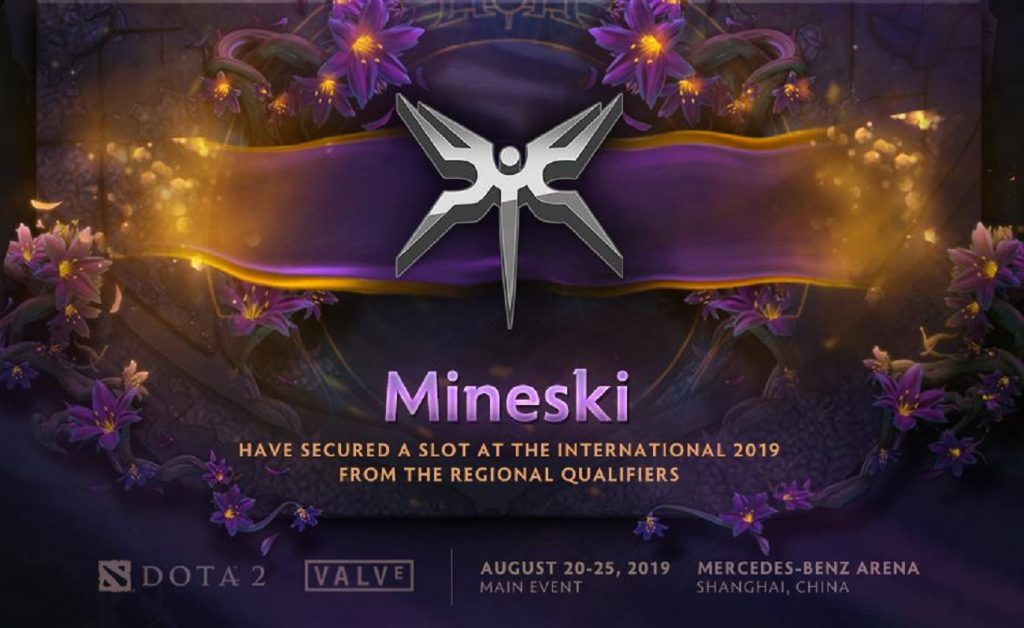 In the TI9 SEA Qualifier, Mineski took the win in an exciting 3-2 finish versus Team Jinesbrus. (Image via @wykrhm / Twitter)

It seemed destined that Mineski would once again be Southeast Asia’s representative on the world stage of The International. But after a lackluster season the team found themselves here, struggling in the trenches of the SEA qualifiers. But finally they are victorious, having narrowly eliminated Team Jinesbrus at the last hurdle.

Right from the start of the playoff bracket, Mineski looked liked they’d shaken off the cobwebs and returned to form. Initially clashing with Team Jinesbrus in their first match, the team showed no signs of the mistakes that had plagued their groups run. In game one, Mineski shut down their opponents, as Jinesbrus’ combination of a roaming Nightstalker and Monkey King failed to sync up with their Naga Siren. In game two they turned the tables yet again, countering Jinebrus’ wombo combo with pure carry potency, and sending their opponents to the lower bracket.

On the other side of the top bracket, Team Amplfy faced off against Team Adroit in a grudge match between two dominant Filipino teams. Amplfy, in particular, were eager to make up for a host of disappointments in recent qualifiers, where the squad has become a staple of the playoffs, appearing in later rounds of every ESL SEA qualifier this year. All of which made their defeat more heartbreaking. Adroit’s lethal combo of Wraith King and Shadow Demon ensured victory against a team that looked outclassed in the best-of-three format.

As the only team to take a game off of Team Jinesbrus in groups, Amplfy probably expected an easy series, and a quick rematch against Adroit. But Jinesbrus seemed to be fixing every mistake they’d made on the fly. In their group stage match, their positioning and unfocused picks had allowed Amplfy to edge out a 56-minute win, as Jinesbrus found themselves repeatedly caught. With elimination on the line, Jinebrus took away Amplfy’s heroes, using their own Io and then Ember Spirit against them to secure progress, and sending their opponents home.

In the winners’ finals, Adroit once again broke out John Anthony “Natsumi” Vargas’s Wraith King to significant effect. The carry player’s dominance on the champ had served them well in the group stage and playoffs so far. But against a resurgent Mineski, it just wasn’t enough. Mineski showed off it’s newly reawoken mastery of champion timings and playing around carries. In spite of winning game one, Adroit found themselves heading to the losers bracket.

And that’s where the team would join Amplfy in elimination. The team was unable to find an answer for Jinebrus’ Morphling play, which carried in three successive games, only slowed by Mc Nicholson “Mac” Villanueva’s game one performance on Ember Spirit.

Fittingly, the finals were a rematch of the first game of the playoffs, with a now dominant looking Team Jinesbrus looking to redeem their early bracket loss against Mineski. And after game one, Mineski seemed to have fallen into its recent pattern of play. They were repeatedly caught and made unforced mistakes, leading to a loss in game one of the series.

The middle of the series was back and forth affair. In the second game Mineski bounced back, a dominant show of force with an unstoppable Ember Spirit. In game three, Jinesbrus demolished their foes with a series of clutch Black Holes from Kim “Febby” Yong-min’s Enigma. And in a hectic game four, Jinesbrus opted for a crazy late-game play to go for tier fours and end, only to miscalculate and lose.

In the fifth and final game, the lead seesawed back and forth. The match drifted to 30 minutes, in a tense battle punctuated with questionable decisions from both teams. Finally, Jinesbrus, with timing and buybacks on their side made a critical decision to take Roshan. But in the ensuing fight, the team fell apart, their Gyrocopter having never reached the carry heights it needed to. Mineski defeated Team Jinesbrus 3-2, in a nail-biting series.

➡️#TI9
What a feeling! Thankyou to everyone who supported us this year, it means everything to us.

See you in Shanghai! pic.twitter.com/Bp5j2akMkM

Throughout groups, Mineski’s mistakes had made their success unlikely. In the playoffs, they defied the odds. They’re still not a finished product, but they are definitely headed to The International, joining Fnatic and TNC Predator as representatives of the region. Jinesbrus, Adroit and Amplfy leave empty-handed, but their standard of play has shown that there’s an incredible level of Dota 2 talent in SEA, and the three qualifying teams will have to watch their backs next season.