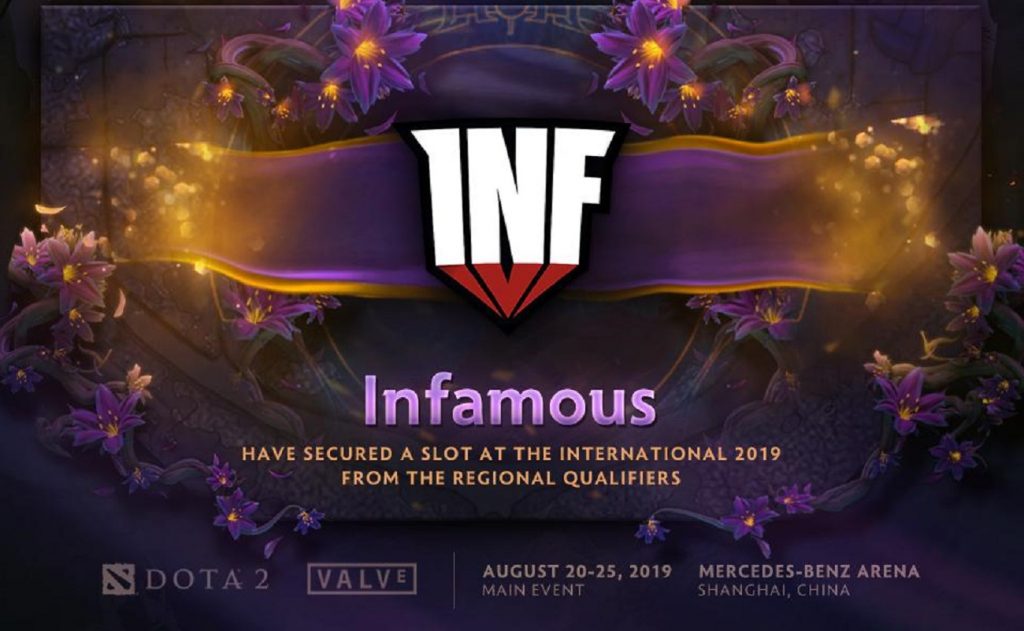 Infamous take the top spot in the SA Qualifier for The International 2019. (Image via @wykrhm / Twitter)

The last of the first three regions to finish up The International 2019 qualifiers, South America saw the Infamous squad earning their spot in Shanghai, China. The SA qualifier had only one split series, the upper bracket final that saw paiN Gaming beat Infamous 2-1. The Peruvian squad were able to rally when they met paiN again in the finals.

After leading the group stage at 6-1, Infamous looked like the team to beat heading into the playoffs. In the end, it took them four series to make it through, but they were successful in their bid to attend TI9. They faced EgoBoys twice, beating them 2-0 both in the upper bracket and then in the lower bracket.

Thunder Predator were the first team in the SA qualifier playoffs to get knocked out. They were taken down by EgoBoys. Mid player Leonardo “LeoStyle-” Sifuentes styled on them with a Windranger in game one (19/2/12) and Outworld Devourer in game two (23/1/9). Unfortunately for EgoBoys, Infamous understood it was necessary to shut LeoStyle- down, and they sent EgoBoys home in the lower bracket final.

It was paiN Gaming who tried to throw a wrench in Infamous’ journey. In both series, the games were back-and-forth, with each team taking the net worth lead at some point. Ultimately, Infamous seemed to have better shot calling in their series against paiN Gaming, underlining the importance of communication. They took all three games in the grand finals. In game one, Hector Antonio “K1” Rodriguez had an impressive amount of farm on the Wraith King (761 GPM at the end of the game), and he went 12/2/10 on Lifestealer and 12/2/12 on Chaos Knight in games two and three respectively.

Overall, the SA qualifier had games as volatile as the region’s roster have been this year. The grand finals are worth a rewatch.

Infamous will be the lone South American representative at The International 2019. With a record of 14-3 across the SA Qualifier, they have to be feeling pretty good about their performance. In just a few short weeks, we’ll know well it will stack up on the biggest stage in Dota 2.