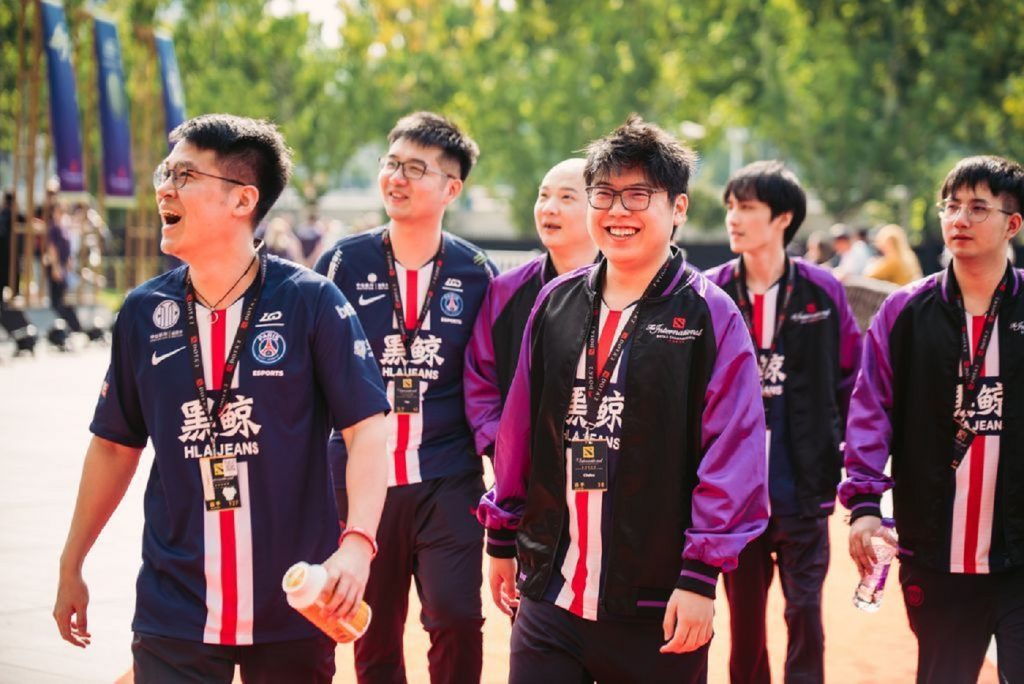 PSG.LGD and Vici Gaming advance in the upper bracket, while Virtus.pro and TNC Predator head to the lower on the TI9 main stage. (Image via Valve)

After countless hours of practice and a grueling group stage, the sixteen teams took to the Main Stage to celebrate the start of the International 2019. Once the 2018 victors, OG, lifted the Aegis onto its resting spot on the TI9 main stage, the event kicked off and teams were ready to go.

The first matches of the day were from the upper bracket—PSG.LGD versus Virtus.pro (VP) and Vici Gaming (Vici) versus TNC Predator. These four teams have the advantage of dropping to the lower bracket if they lose, but it doesn’t mean that these teams didn’t fight tooth and nail to stay in the upper bracket. Using every strategy they had to outwit their opponents, the upper bracket matches on the first day of the Main Stage did not disappoint.

PSG.LGD’s series against VP really set the tone for the day. The biggest surprise in the drafting phase in game one was a Brewmaster pickup by VP. Brewmaster had been one of the seven heroes who hadn’t been selected thus far in the tournament. Besides that surprise pick, and a convincing Sven last pick by LGD, the draft seemed to favor LGD.

LGD pulled off a convincing win in game one thanks to LGD’s relentless pressure and fast-paced game even when LGD was falling behind. LGD’s Tidehunter pick was one of the leading reasons they won, especially with the number of clutch Ravage plays that Chalice pulled off. In the words of Owen “ODPixel” Davies, Yang “Chalice” Shenyi “plays with no fear, he plays however he wants.” Tidehunter with Wang “Ame’” Chunyu’s Sven disallowed VP to find any momentum once his duo popped off. Ravage, Storm Hammer, Cleave, Call Down – the deadly pace of LGD in addition to their hero synergy led to a fast 45-minute game.

What a game to kick off the #TI9 Main Event! @LGDgaming take the win over @virtuspro despite being against a Morpling/Earthshaker combo! 🤩 pic.twitter.com/g5LK14oj9X

Game two of LGD versus VP saw some more great drafts by LGD and some unfortunate safety picks by VP. LGD drafted the infamous hero combo of Shadow Demon and Mirana and we all know what happens when those who heroes get their timing down. VP tried to counter this draft with a last-minute Terrorblade pick for Ramzes but it, unfortunately, didn’t pan out for the Russian team.  LGD’s Tidehunter, who somehow slipped through the ban phase, and an interesting PA pick again demonstrated that although LGD might struggle in the early phase, they are well equipped to change the tide and take control of the game. And if that wasn’t enough, Ame’s Phantom Assassin decided he needed a Divine Rapier to help consolidate their win in game two.

With this win, PSG.LGD guarantee themselves a top-six finish while Virtus.pro head to the lower bracket to face elimination.

The first two games were long, over 60 minutes each, with both teams playing loose and making mistakes. In game one, TNC emphasized their aggression by looking to take fights; this was often after they lost a hero to a VG pick-off. Somehow, TNC made the four versus five aggression work. While they fell behind in the mid-game, TNC were able to turn it around. And ultimately, it was an over-extension by Zhou “Yang” Haiyang’s Enchantress, trying to pick up a 75-minute bounty rune that was punished.

A couple of dodges, hero kills and side steps are the perfect mixture for Tims and Gabbi's 1 minute kiting in this Predator Play of the Game! #PredatorPOTG#TI9#StrongerTogether#SummonYourStrength pic.twitter.com/FYDhdNACUN

Game two saw the two teams trade the net worth advantage. Just after forty minutes, TNC took an extended fight that dropped four Vici Gaming players. After downing Roshan, TNC…failed to push the advantage to take objectives. And that was really the story of the game. TNC were aggressive about taking team fights, but couldn’t translate that into breaking high ground and pushing into the Vici Gaming base. It turned into another hour+ slog, and VG took the win to tie the series.

Vici Gaming vs TNC Predator Game three — who will continue in the Upper Bracket and who will fall? #TI9 pic.twitter.com/HJLfS0TChh

So after two slow games (albeit eventful, with plenty of action), we came to game three. Vici Gaming drafted for the late game, with Warlock, Centaur Warrunner and a last-pick Medusa. TNC looked to change things up with their final pick, the last hero drafted: Broodmother. This hero is much stronger in the early game, implying a turn-around in strategy from the first two long games.

Unfortunately for TNC, it was Vici Gaming who pushed the pace. Centaur Warrunner countered Broodmother in the mid lane, killing her broodlings with Double Edge. On the Radiant side, TNC opted to run a tri-lane in top, leaving Carlo “Kuku” Palad’ Earthshaker facing Leshrac and Shadow Demon in the bottom lane. It did not go well, to say the least. After five minutes, Kuku abandoned the lane to head into the jungle. Unfortunately, TNC didn’t move anyone into the lane, leaving VG to free farm, giving up the lane’s farm themselves, and starving their own supports in the top lane.

Vici Gaming played the third game with more discipline than they had the first two, and closed it out in a quick 34:42.

With this loss, TNC moves to the lower bracket, where they will face elimination. Now guaranteed top six, Vici Gaming advance to face PSG.LGD on August 22.

Check back frequently with Hotspawn for all your TI9 Main Stage coverage!

Dota 2 Other
Share
Hotspawn Team
Built from the ground up as a hub for all things esports, Hotspawn’s goal is to provide all the information and tools you need to be the best player/fan you can be.
Follow me