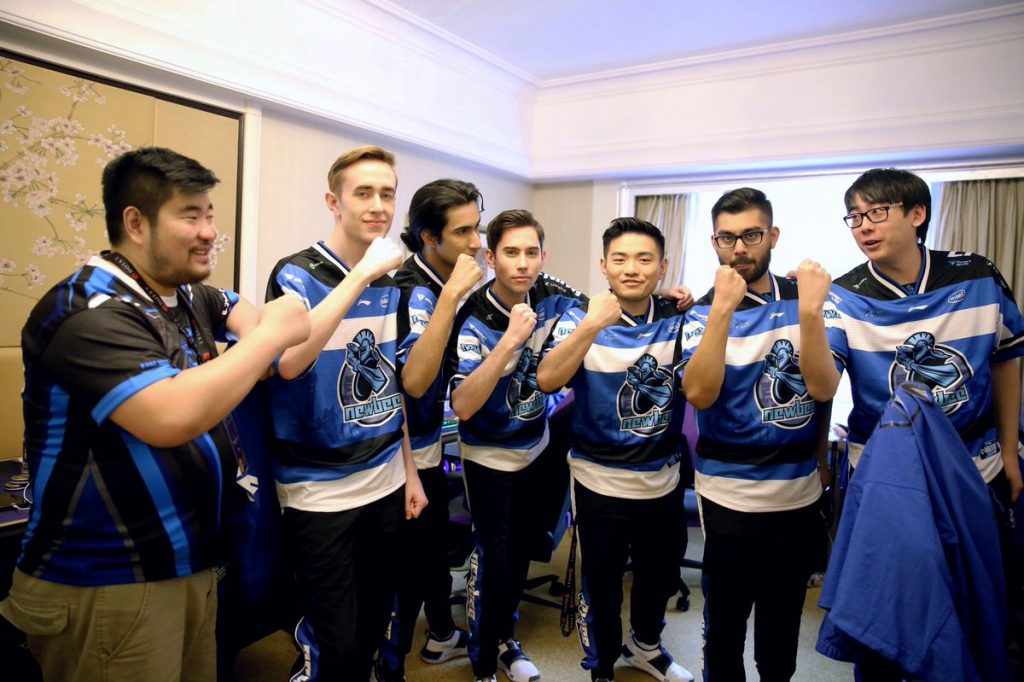 Newbee secured third place in TI9 Group A after a draw with Mineski. (Image via Newbee)

After four days of games, TI9 Group A wrapped up today, with just a single set of matches played by the group. And while part of the standings had already been locked in, there was plenty to play for the middle-of-the-pack teams. For Newbee, Alliance, Mineski, TNC Predator and Team Liquid, a single win could have pushed them into an upper bracket spot, while a loss or draw would leave them in the lower bracket and hand the advantage to another team.

As previously reported, after yesterday’s games, Chaos Esports Club was the first team eliminated, having failed to secure a winning series during the group stage. Today, the team was able to find a conciliatory draw against Team Secret, one of the strongest teams in the group. What was most impressive about this victory was the speed in which they achieved it.

In their previous draws against top teams, Chaos had forced the games into the 50, 60 and even 80-minute range, exhausting their opponents into submission. In this game, there was instead a surprising show of quickly executed dominance. Utilizing the power of their team’s wombo combo, Chaos tore through Secret in the second game. During the game, the three Ts of Tidehunter, Tinker, and Timbersaw joining up for some impressive kills. However, even in this game, Chaos EC was prone to mistakes, frequently over chasing and being caught out of position.

On the other side of the group, PSG.LGD and Secret had already locked in their upper bracket spots. Both team’s incredible performances so far have set them up to be top of the group, but neither has looked perfect, dropping games to teams far lower in the standings. Today, both gave up draws to teams which really shouldn’t have challenged them.

Besides Secret’s previously mentioned match, LGD had trouble pinning down an Alliance squad that has spent most of the group stage forcing its opponents into unlikely draws. Here Alliance’s Bristleback, Storm Spirit and Crystal Maiden combo worked well in one format but failed to gain traction in the other. After the EU team swapped heroes between the carries and supports in the second game, their opponents were able to out lane and defeat Alliance across the board.

How about some support Bristleback to end the group stage. 🤷‍♂️

For today, however, the real story was the desperate battle for those final two upper bracket spots. At the end of day three, it wasn’t impossible that one of five teams could have taken third and fourth place with just a single win. And yet it was only TNC Predator who stepped up and made the most of the opportunity. In a 70-minute battle with Team Liquid, Kim “Gabbi” Villafuerte played the long game on his Lifestealer to eventually carry his team. His incredible 13/2/21 performance seemingly to broke TL, who had no answer for his hero. Demoralized, and with no hope of reaching the upper bracket, TL continued on to lose their second game, and lock in their bottom of the table spot, while TNC rocketed to fourth place.

The rest of group A found themselves embroiled in a series of matches which resulted in draws and robbed them of the crucial two-point scores they needed to move up in the rankings. As a result, the final standings have remained almost unchanged from day three, with only TNC and Mineski swapping their position. The two biggest surprises of this group have been both Team Liquid’s poor performance and Newbee’s incredible results. Both teams have defied expectations, albeit in radically different ways. And both find themselves in a deserved position after groups.

We even up the series 1:1 against Mineski and finished the group stages with a 9-7 record.

We secured our upper bracket spot and we will see you in The Mercedes-Benz Arena during the Main Event🙌. #TI9

The teams now have a day of rest before the action shifts to the Main Stage on August 25, local time.

Check back with Hotspawn for more The International 2019 coverage.